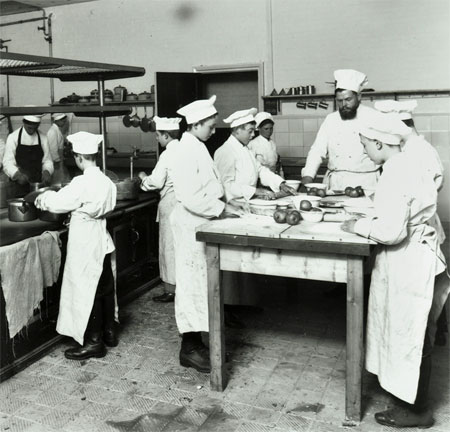 Recently a book was published containing the biography of the Dutch chef Iwan Kriens (1871- ca 1957) who had a very succesful career in England. To honour the occasion, this page contains a recipe from The Victory Cookery Book, which he wrote with Mrs C.S. (Dorothy) Peel in 1918.

Kriens already had a successful international career as cook when, at the start of the twentieth century, he dedicated himself to quality schooling for people (men) working in restaurants. As a teacher he was loved by his students. He also gave demonstrations for larger audiences which were very popular. Mrs Peel was a journalist and author, writing about various subjects of which cooking was one. Both Kriens and Peel dedicated themselves – at first independently from each other – to educate the British on cooking, preventing waste of food and cooking with rations. When Dorothy Peel was asked by the Ministry of Food to write a cookery book on the subject, she invited Iwan Kriens to cooperate. It is hard to distinguish what was contributed by each author.

The book De kookschool van oom Iwan (‘Uncle Iwan’s cookery school’) has been written by Trudy van der Wees, who is a journalist and an author, and married to a cousin of Iwan Kriens. I will not write about his life here, let’s just hope that the book will soon be translated into English. Van der Wees also published (adapted) recipes from The Victory Cookery Book in Uncle Iwan’s Cookery School, but the vegetable cutlets are not among those.

Cooking during the First World War

The Victory Cookery Book was not the only war-time cookbook that was published during the First World War. Even in the Netherlands, that had remained neutral, there was food rationing; and several books and pamphlets on cooking during war-times were published. One of those publications is Meulenhoff’s Oorlogskookboek (Meulenhoff’s War Time Cookbook). More about that cookbook can be read at the recipe for a macaroni dish. Another, international cookbook that was published in 1916 is Allied Cookery. This is a collection of recipes from the allied countries and its goal was “to aid the war sufferers in the devastated districts of France”. A recipe from that cookbook can be found here.

Some similarities exist between the recipes from the Dutch Oorlogskookboek and the Victory Cookery Book: one should eat less meat and use fuel sparingly. Striking difference: the Dutch cookbook emphasizes the use of the haybox, providing information on how long dishes must be heated and how long they have to stay in the haybox, the Victory Cookery Book recommends Casserole cooking. This had the extra advantage that it saved on washing-up because the food could be served straight out of the pan. By the same, since food cooked in a haybox also is placed in a casserole, it has the same advantage with regards to washing-up. 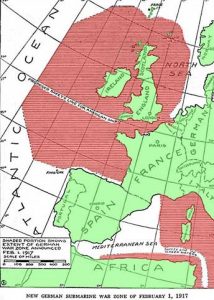 When in 1917 the Germans enforced a complete naval blockade using U-boats around the British Isles, shortage of food and other commodities grew to such an extent that rationing was implemented early 1918. Earlier, in 1917, the British Government had tried to limitation of consumption on a voluntary basis, but this proved to be unsuccessful. Now, in 1918, everyone had equal access to food and fuel, even King George V and Queen Mary had their own ration cards. For the poorest, rationing was a relief of their meagre diet. Rationing would remain in place for several years after the war ended, in 1920 the last limitati9ons, on butter, were finished.

After the Second World War it would be years longer before the last limitations ended (in 1954), just as in the Netherlands. When looking purely at the dietary advise during these times, that was not so bad: eat more vegetables and legumes, eat less meat, wheat and sugar, and do not waste food. All things that are still relevant today.
The picture of the German blockade of the UK is from Wikipedia, the colours are added by me.

Nowadays there are more and more vegetarian meat substitutes available for people who do not want to eat meat but do long for a meat ball or breaded cutlet. These alternatives all have in common that they are ready-bought, there is no possibility to add spices or other ingredients to add an individual touch, except in the sauce.

Peel and Kriens have added a recipe to their cookbook that can be considered a made-at-home meatless version of the Wiener schnitzel: the vegetable cutlet. With this recipe, the cook has great liberty to determine the flavour by adding spices or using alternative vegetables. The basic recipe is not a fully-fledged alternative for meat from a dietary point of view, because it consists solely of vegetables. However, the recipes that follow enrich the mixture that is used to form the cutlets with legumes, egg or nuts so that all necessary nutrients are included. Below is just the basic recipe, I leva the variations to your imagination.

I chose this particular recipe from Kriens’ cookbook because I wondered whether it was at all possible to form cutlets from nothing but cooked vegetables. And yes, it was! Uncle Iwan was right.

One more thing (or two)

Before I present the recipe, here are some links that I personally like or find interesting.

East Sussex World War I is a project to celebrate the centennial of the end of the Great War. East Sussex is the South-Eastern part of England that is situated closest to the European continent. As the makers of the website declare: “the guns and fighting in France and Belgium could be heard in East Sussex”. The site calls on people who live or have lived in the area to share their stories and memories. The result is a growing archive of stories about ordinary and special people. 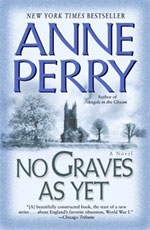 I like to read mysteries and crime novels. One of my favourite authors is Anne Perry, who has created not only two Victorian crime series, but also a five-part series that plays during the Great War, the World War I Series. Each part plays during one of the five years from 1914 to 1918. The story is about the experiences of the members of one family with one overarching mystery. The books can be bought in print or as e-book (just follow the link).

The recipe as published in The Victory Cookery Book from 1918 (see bibliography). The vegetable cutlets are on p.169, the sauce on p.22.

Materials. — 1 oz. chopped onion, ½ oz. fat, 1 oz. flour, 1 lb. mixed vegetables from which stock has been made (they should be drained as dry as possible), salt and pepper, pinch of grated nutmeg, a little ground rice and batter (see p. 233), crumbs, vegetable sauce.

Method. — Fry the onion in the fat till cooked but not coloured. Add the flour and mix with the fat, then chop the mixed vegetables, add them, and heat all together.
Season with salt, pepper and a pinch of nutmeg, bind the whole by boiling thoroughly, stirring all the time. Place on a plate to cool. When cold, shape into pear shape, using ground rice or other flour.
Coat the shapes lightly with batter and bread or other crumbs. Roll them, still retaining the pear shape, now bend the point and press down with a knife or with the flat hand. This will form them into the shape of cutlets. To cook, fry in a pan with very little fat. When one side is brown, turn over and fry the other side likewise, or if fat is not available they can be baked in the oven by mixing the crumbs with a very little fat before coating, then place them on a baking-sheet and bake in a hot oven until brown.
These are nice cold or hot, served with or without sauce.

Method — Fry the flour in the fat until it becomes nut-brown. Let it cool, and then add the vegetable stock. Stir until boiling-point is reached, then add the Worcester sauce and simmer very gently for about 15 minutes. The fat used will rise to the surface, and must be skimmed off and added to the store of cooking fat.
This preparation tastes and looks like a meat gravy. For sauce boil the stock down until the thickness desired is reached; season to taste, and it is then ready for use. […]
If available a tablespoonful of tomato purée or one or two fresh tomatoes can be added, or the sauce may be varied by adding a spoonful or two of chutney, mixed pickles, mushrooms, etc.

The vegetables that are used in making the cutlets, were first used to make vegetable stock. And that stock in its turn is used to make the sauce. The recipe for stock is on this page.

I have decided to add walnuts to the vegetables to create a meat substitute which contains all necessary nutrients. Other options mentioned by Kriens are: 2 chopped hard-boiled eggs, or 200 gram cooked lentils, split peas or beans. Although there is no mention of cheese, that would be an excellent addition. But in 1918 cheese was a scarce commodity.
Main dish for four persons; Preparation in advance 25 minutes (plus preparing the stock); Preparation 10 minutes. 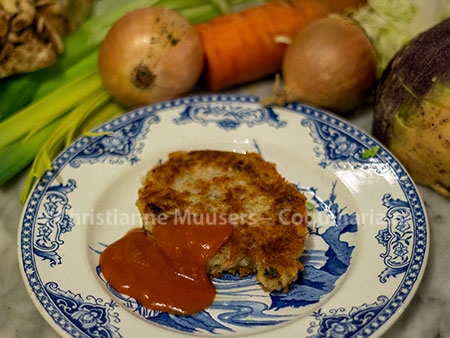 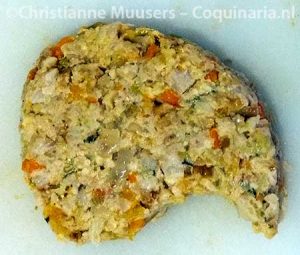 Chop the vegetables that were used for the stock even more finely. Chop the walnuts also and put them with the vegetables. Add pepper and nutmeg. Salt has already been used in making the stock.

Fry the chopped onion in the oil at low heat until it just starts to brown. Add flour, stir well, and let it ‘sweat’ for a short while on low heat. Then add the chopped vegetables and walnuts; stir-fry into a firm ball. Transfer to a plate and let it cool.

Meanwhile, prepare the batter by beating everything until smooth, and prepare the sauce (see below). 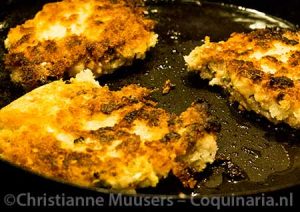 Pour the batter in a deep plate and dip the cutlets gently in it one by one. Turn them to cover both sides, then cover with breadcrumbs or ready-bought breading. Heat the oil in a frying pan and fry the cutlets to a nice golden colour.

For extra protein, use only milk for the batter. But for vegans, use only water.

The quantities from the original recipe will result in a rather thin sauce because one had to use fat sparingly during the war. However, I have adapted the recipe by doubling the amount of fat and flour. The basic recipe does not contain tomato purée, but it is mentioned as one of the possible variations. Other choices are pickled vegetables, chutney or mushrooms. 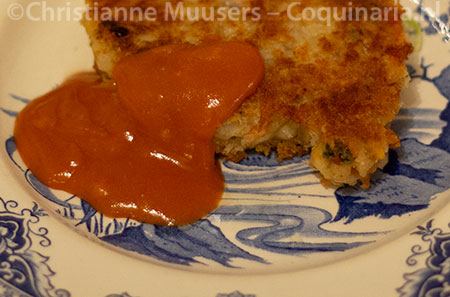 Heat the oil in a small saucepan. Add flour, stir with a wooden spoon and fry until the flour has turned nut-brown. Gradually pour in the vegetable stock, keep stirring. Finish the sauce with the Worcestershire sauce and tomato purée.

A spicy, black sauce which is produced by the English firm Lea & Perrins since 1838. The article on Wikipedia suggests a connection with the Roman fish sauce garum, because of the fermented anchovies it contains amongst other ingredients. One of the ‘secret’ ingredients of Worcestershire Sauce is rumoured to be Asian soy sauce. Many Asian cuisines use some form of fermented fish sauce, so it is more probable that this was the inspiration for Worcestershire Sauce rather than the Roman sauce.

Recipe for vegetarian cutlets from 1918
These vegetable cutlets are from an English cookbook that was published in 1918. Dutch cook Iwan Kriens was one of the authors. Many vegetarian recipes were included in the cookbook because of food rationing, but Kriens succeeded in creating tasty recipes.
© Author Christianne Muusers