Garum is one of the basic ingredients in the cuisine of Roman antiquity. It is a fish sauce that was used to salt dishes. One can’t simply use kitchen salt in recipes, because instead of extracting moisture (which is what salt does), garum adds moisture to a dish.
When preparing an authentic Roman dish, this sauce is a necessary ingredient, especially when using recipes from De Re Coquinaria. It is used in much the same way as our Worcestershire Sauce or Maggi: one adds it in small quantities to a dish. The fish sauce is not meant to be used as a sauce on its own.
There are two ways to acquire fish sauce. One can buy Eastern fish sauce, like Vietnamese Nuoc Mam or Thai Nam Pla. These sauces are made with fermented fish, salt and water. But more fun is experimenting with home-made garum.

Many roads lead to garum

1. Small fish are covered with salt, spread out in the sun and turned from time to time. When they have been completely fermented they are scooped into a fine-meshed basket that is hanging in a vase. The liquid that seeps into the vase is liquamen.
2. This is the method that I’ll call the Method Wunderlich (see below). Fish (anchovy, mackerel, tuna) is mixed with salt in a ratio of 9:1, then left in a pot in the sun for several months, and stirred occasionally.
3. For each half liter of fish a whole liter of old wine is added.
4. The ‘fast and cheap’ garum is the recipe which is found below: brine and fish go in an earthenware pot with oregano. This is brought to the boil, and then strained after cooling until the liquid is clear. The garum in the bottle you see in the picture on the left is made like this.
5. The very best garum, according to the Geoponica, is called haimatum. It was made with solely the innards of the tuna, including blood and gills. These are put in a pot with salt, and after two months the liquid is garum.

Recipe for quick and easy garum

This recipe is inspired by the one J.M. van Winter gives in her book Van soeter cokene (see bibliography), pp. 35/36. All I did was leaving out all the other herbs, using only oregano. This is the fourth method described in the Geoponica. You can also add some dried mint. The resulting liquid is very tasty when used in recipes, and will keep indefinitely in the refrigerator. The smell really is not bad at all.

It is easy to prepare in modern kitchens, and only takes an hour or so. Do not be put off by the revolting mess in the cooking pan; the end result will be a clear, amber-coloured liquid with an intriguing smell. The finished garum does not smell overly fishy, but during the cooking process your kitchen will be pervaded with a penetrating fish smell. Cats love it. If the range hood in your kitchen is not strong enough, prepare the garum on an outdoor cooker. 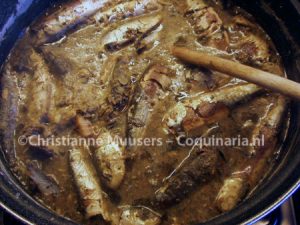 Rinse the fish under running water, leave them intact (do not remove gills, innards or whatever). Put fish, salt and herbs in a cooking pan, add enough water to cover the fish with one or two inches of liquid on top, in my pan that was 1.5 liter.

Bring to the boil, let boil for fifteen minutes. The fish are cooked to a pulp. Crush the fish even more with a wooden spoon; continue boiling until the liquid starts to thicken, about twenty minutes.

Now start straining. First use a coarse strainer or colander to remove all the larger bits and pieces. Then strain the liquid several times through a kitchen cloth or paper towel until the liquid is clear. Make sure that during the last straining turn the garum has cooled to room temperature. Depending on the fish you use, and how long everything has boiled, you’ll end up with a pale yellow to deep amber coloured liquid.

Keep the garum in sterilized glass jars or bottles in the refrigerator. It may be that salt crystals are collecting at the bottom of the jar (see below for the explanation). When the garum returns to room temperature, the crystals will dissolve again.
Because of the high content of salt, this sauce will keep for years. You’ll need but a tea- or tablespoon full at the time. Take care to use a completely clean spoon for taking garum out of the jar, and when pouring it out of a bottle, wipe the neck with a clean cloth before putting the cap back on.

The quick and easy garum is surprisingly barely fishy at all, and tastes quite good. The main difference from this garum with modern Asian fish sauces and authentic Roman garum is that it is not made with fermented fish but boiled fish. Asian fish sauce often is made without herbs, resulting in a slightly more simple taste.

Garum should be a fairly clear liquid. Throw it away if it turns opaque. Always take care that the spoon which is used to take garum out of the pot is absolutely clean, and when it is poured out of a bottle, wipe the neck with a clean cloth.

Real garum is not made with boiled fish but with fish that has been fermented in the heat of the Mediterranean sun. In the Netherlands there is quite a lack of Mediterranean sun. But the German Heinrich Wunderlich explains on his site (in German) how to make fermented fish sauce in a yoghurt-maker. You need small, whole fish or just the innards, and 15 to 20% their weight in salt. Make sure the salt is mixed evenly with the fish. Put this mixture in the yoghurt-maker, in which it must ferment for three to five days at a temperature of 40 °C (104 °F). Stir it through once a day. The fish will dissolve completely, only the fish bones will be left. According to Wunderlich the garum will be even better when you let it ferment longer (up to several months). This means the yoghurtmaker will have to be switched on all that time. Wunderlich reminds us that it is absolutely vital that the amount of salt is sufficient. Better to err on the excessive side than be too stingy. I have acquired an electric fermenter and have started my own experiment with fermented fish sauce. I will post the results later.

Start with rinsing the bottle or jar with detergent. If it is a used bottle or jar, check that there no lingering smells. Then either cook the bottle or jat with sodium carbonate, or rinse with water to which a little sulfite is added (½ tsp sodium for 1 liter/2 cups water) and a pinch of citric acid. Then rinse well twice with boiling water, set the bottle or jar with the opening up on a clean towel to dry. The moisture will evaporate.

Saturation of water with salt

There is only so much salt you can dissolve in water. At room temperature that is about 30% (300 gram salt in 1 liter water), in boiling water 40%. When the solution cools down, the excess of salt will form crystals. In my recipe I start with 30% salt, but because of the reduction the concentration of salt will become higher. If the concentration is higher than 40%, there will be salt crystals in the liquid even at boiling point. It is no use adding these to the strained garum, that liquid is saturated.

Recipe for Garum or liquamen, the Roman fish sauce
Roman dishes were often flavoured with liquamen or garum. On this page a recipe to make your own fish sauce. You’ll find that it’s not bad at all!
© Author Christianne Muusers