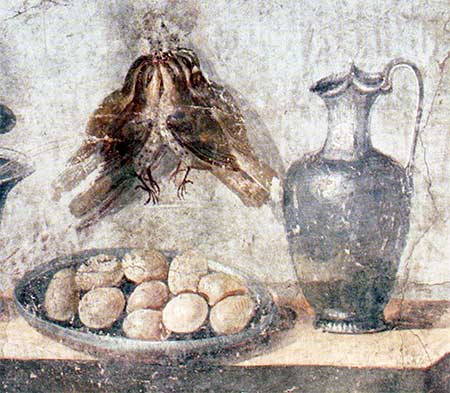 This is a recipe from Antiquity.It is from the cookbook that inspired me in naming my website Coquinaria. It is called De Re Coquinaria, although it is better known as Apicius. More about his cookbook can be read at the recipe for Roman mussels. And another recipe for Roman patina (vegetarian) can be found here.

This Roman dish is called Patina. In modern English patina means the film of green oxidation on copper or bronze, or any fine layer on a surface. In Latin patina meant ‘dish’, either broad and shallow and meant to serve food on, or a multifunctional dish, in which food could also be prepared. That one was round or oval, made of earthenware or bronze, with straight upstanding sides. In modern English a paten is a small dish to hold the Eucharistic bread. The dominutive of patina is patella which is the ancestor of the Spanish paella. Indeed, the pan I used for this patina is the one I use for my paella as well (even though it is not an official paellera).

Food that was prepared in the patina was also named patina. They were egg-dishes, comparable to modern savoury custard or omelet. There is a whole chapter devoted to these dishes in De Re Coquinaria in Liber IV (Pandecter or “many ingredients”), chapter II (Patinae piscium holerum pomorum or “patinae with fish, vegetables and fruit), in the edition of Flower en Rozenbaum pp.92/111.

The basic, everyday patina (patina cotidiana) that opens the chapter is made with pounded, boiled brains. The second recipe is probably more to the taste of the modern public: it is an omelette with pine nuts, other nuts and honey. There are patina with elderberries, horse-parsley (and brains), rose petals (and brains), with anchovy, with vegetable marrows, a very opulent patina with pine nuts, sea-urchins, vegetables, several kinds of sausages, cheese, oysters and jellyfish (and brains of course!) which is simply called ‘patina with milk’ (patinam ex lacte), another opulent patina ‘à la Apicius’ (Patinam Apicianam sic facies, in which stuffing is layered with pancakes) with sow’s udder, breasts of turtle-dove, fillets of fish, and “whatever other good things you can think of” (“et queacumque optima fuerint”), there are several patinae with fish, with sorb-apples (and brains), with pears, peaches, stinging nettles, quinces. Of all these I have chosen two patinae with asparagus. The patina with asparagus and songbirds is on this page, the one with asparagus and green herbs can be found here. 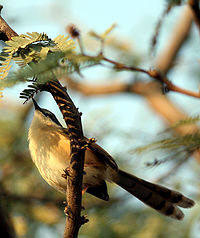 The recipe on this page is titled ‘Cold asparagus patina with quails’. Originally other birds were used in this recipe, small songbirds called ficedulae, ‘fig-peckers’ (Sylvia hortensis). These are very small, about the size of a robin. Faas mentions other possibilties, like the Garden Warbler (Sylvia borin), Dunnock or Hedge Warbler (Prunella modularis) and the Pied Flycatcher (Ficedula hypoleuca). When you imagine these small birds plucked of their feathers they are even smaller. Translated to the fishworld you might say: anchovy-sized. In most parts of Europe we let the cute little songbirds live in peace -at least with regards to cooking. The smallest bird to end up on our dinnerplates is the quail. Not a songbird, but very tasty. That is why I have replaced the ficedulae in my adaptation with quails (to return to the comparison of sizes: sardine instead of anchovy). On the picture above a Roman still life with trussed songbirds and a dish with eggs.

The original recipe, taken from De Re Coquinaria (more about this cookbook), in the beautiful edition of Christopher Grocock and Sally Grainger (pp.178/179, see bibliography).

In his book Around the Table of the Romans Faas provides us with the other recipe for patina with asparagus, and he remarks that it is almost the same as this recipe. So: simply put quails in the patina with green asparagus, and you have made this one. In my opinion these two recipes are not interchangeable, the eggs are tempered differently.
I have prepared the aliter patina de asparagis on the picture for six eaters as a main dish, with six quails and eight eggs which was more than enough. And I used white asparagus instead of green asparagus (more on asparagus).
For 4 personsn as first course, for 2 persons as main dish; preparation in advance 30 minutes; preparation 35 minutes. 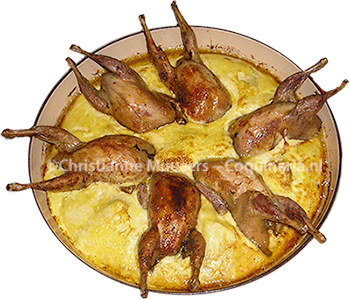 500 gr white asparagus
2 Tbsp white wine
2 Tbsp Vino Santo (see note for passum)
freshly ground pepper to taste (but please use less than the original recipe, because that is half a tablespoon full)
fish sauce to taste (this is the salt. Use Eastern fish sauce, or home made), 1 tsp to 1 Tbsp
3 Tbsp olive oil
4 eggs
2 quails

Soak the asparagus in cold water for an hour before peeling them. Then peel the asparagus, and cut off the wooden ends of the stalks. Cut off the asparagus heads (5cm/2½ inches) and keep them apart. Boil the asparagus stalks in salted water for about ten minutes (very thick ones fifteen) (when you add the asparagus peel you’ll end up with an excellent base for asparagus soup). Take the stalks out of the water, boil the heads in the same liquid for five minutes. Green asparagus do not have to be peeled, you can either boil them a few minutes, or fry them in olive oil.

Purée the asparagus stalks. It is very important that you have removed ALL the peel from the stalks, because any leftover peel will remain in the purée as hard, disagreeable strings.
Fry the quails in olive oil for twenty minutes (or poach them, or roast them). Leave them whole or cut them in two.
Temper white wine with Vino Santo and fish sauce (this is called oenogarum). Add pepper and olive oil. According to the original recipe you should bring this to the boil and then mix it with the eggs. This would cause the eggs to curdle. It is best to add the oenogarum in small quantities at the time, stirring the eggs all the while. When this is done, add the asparagus purée.

Preheat an oven to 200 °C (392 °F). Grease a round or oval dish with olive oil and pour in the egg-mixture. Divide the saved asparagus heads over the eggs (they will probably sink into the eggs), and the quails. Cover the dish with aluminium foil, and place it in the middle of the oven for 20 to 30 minutes. Remove the foil after 10 to 15 minutes.
When preparing this dish in larger quantities the dish needs more time in the oven (and use a larger dish).

The patina is served in the dish in which it is prepared. According to the title of the recipe it must be served cold (that is, at room temperature), but it is also very tasty when hot. 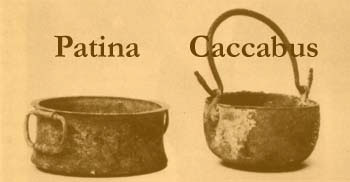 Caccabus – Small kettle
Cyathus – Half decilitre (50cc, a little over 3 tablespoons)
Patella – Diminutive of patina (see below). The word paëlla is derived from this
Patina – Round or oval dish with upright sides for in the oven or on the fire
Scrupulum – 1,137 gram, a little less than ¼ teaspoon
Uncia – Roman ounce, 27,3 gram (the modern ounce equals 28,35 gram)

Patina, a Roman recipe for eggs from the oven
This oven-baked savoury custard with quail and asparagus from De re coquinaria (Apicius) is very special.
© Author Christianne Muusers