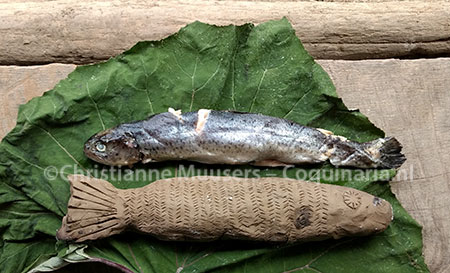 Archaeologists and archaeobotanists are experts in reconstructing cooking methods and ingredients that were possibly used during Prehistoric times. However, a ‘prehistoric cuisine’ does not exist. What was on the menu depended on the millennium, the time of the year, the location and available resources, and perhaps also on religious traditions and taboos. Moreover, the age before historic times is very long, with occasional dramatic changes in climate and landscape. Unfortunately, this means that it is not possible to assign an exact year – or even century – and place for this ‘prehistoric recipe. In fact, thIs is more of an impressionistic reconstruction of my own.

It stands to reason that there is no ‘original recipe’ to cite from, as the oldest surviving written recipes date from three millennia ago. I think this clay fish represents an even older era.

I used rather small fish, but larger fish can also be used; they just need to bake longer. It is possible to use a digital meat thermometer that has to be inserted through the clay before it has dried, since it must measure the fish inside it. Also make sure that no cables are placed directly on the hot coals. However, with small fish you can assume the fish is done when the clay is completely dry and hard.
Main dish for 1 or 2 persons (depending on the menu); preparation in advance 30 minutes + drying out the clay; preparation about 1 hour. 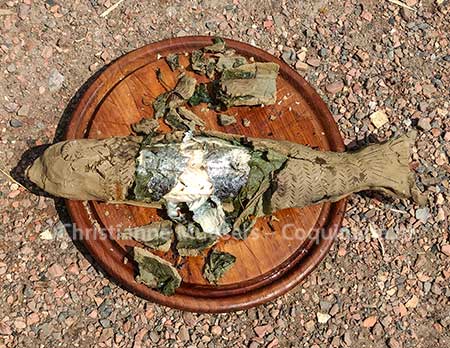 1 trout, salmon trout or mackerel, or any other round fish of comparable size for 1 or 2 persons
some sprigs of herbs
large leaves of sorrel or cabbage
river clay
coarse kosher salt (sea salt)

Clean and empty the fish, descale it if has scales. Put some herbs, scallion, dried and reconstituted mushrooms inside the fish.
Rinse the leaves of sorrel or cabbage (or butterbur) with boiling water. Remove the thick veins.
Wrap the fish completely in the leaves. 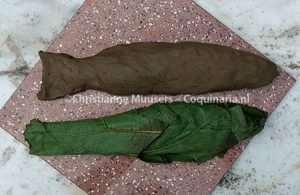 Using a metal wire, cut a thin slice of clay from the large lump, and roll it out with a wooden rolling pin until the sheet is large and wide enough to wrap a fish into. Place the leaf-wrapped fish on the clay sheet and fold the clay around it. Gently lift the clay fish from the worktop to make sure it will not stick, pinch the seams well together and smoothen the surface as much as possible. Accentuate the fish form by forming a tail at one end and decorate the clay as you wish. If possible, dry the clay fish for several hours, preferably by placing it on a fine-meshed rack to let it air-dry from all sides. It is also possible to place the fish on the coals right away, but there is a larger chance of cracks appearing in the clay when doing so. 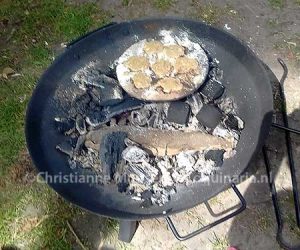 Prepare a coal or wood fire in a fire bowl or a hearth place on the ground. Place the clay fish on the edge of the heat. When one side looks dry, turn the fish to bake the other side. It will take about one hour for the fish to bake. Then, remove the fish from the fire and let them cool.

Break the clay crust and carefully peel it off the fish. The leaf that was used to wrap the fish in will probably stick to the clay. Since the leaf is not meant to be eaten (especially not if butterbur was used), this is not a problem. When the fish has been freed from the clay, it can be eaten. Sprinkle the fish with some salt and use your fingers to pick off pieces of flesh. The use of cutlery is optional. This is a prehistoric recipe, after all. 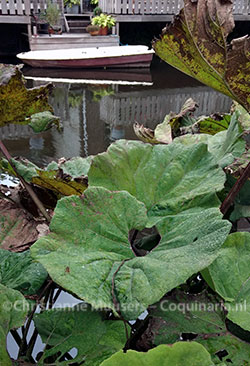 This perennial is probably named after the custom to keep butter wrapped in these leaves to protect it. To me, it will always be associated with the bustling innkeeper of The Prancing Pony in Bree, in J.R.R. Tolkien’s The Lord of the Rings. The botanical name of butterbur is Petasites hybridus. The plant loves a moist environment, and flowers in early spring before the large leaves appear. In the street where I live butterbur grows rampant on the side of the canal. I used the blanched leaves to wrap the prehistoric fish in, and the leaves themselves were not eaten. It is not advisable to eat large quantities of butterbur leaves. The plant contains pyrrolizidine alkaloids that can cause liver damage. Possible alternatives for wrapping the fish are large cabbage leaves or sorrel. Especially sorrel is excellent, because it adds a slightly tangy flavour to the fish. (Wikipedia on Butterbur)

The Dutch Wikipedia describes clay as clastic sediment. Clastic means something like ‘in small pieces’, sediment that – in the case of clay – was formed by water. In clay, the small pieces consist of very small plates. Around many large rivers in the Netherlands and Germany clay can be ‘harvested’. It is used – among many other things – to make bricks and roof tiles. The oldest surviving ‘writing’ is cuneiform on clay tablets, as is the oldest surviving recipe collection.
Clay becomes hard and breakable during baking, but it will only remain hard when baked at a temperature of 900 °C (1650° F) or more. If not, it will lose its firmness when it is moistened. The clay fish is hard after baking but when immersed in water it will become a soggy mess.
Artisanal clay can be bought online or at some shops that sell materials for artists. It it is not an expensive material: I paid € 5,00 for 10 kilos (20 pounds) of clay. Keep it well wrapped and moist. It helps to pierce the clay lump in several places with a knitting needle and pour a little water over it. (Wikipedia on clay)

Prehistoric fish recipe
This is a recipe for baking fish packed in clay on an open fire. It was an experiment, and in my opinio,n it went well. Here is how I did this.
© Author Christianne Muusers