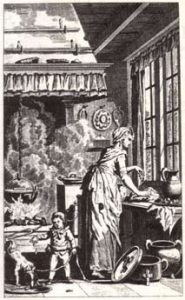 In the Dutch language quinces are called quince apple or or quince pear. According to the sixteenth-century recipe for quince pie, quince apples must cooked and quince pears baked. I am not sure why, the form of a quince makes no difference in the preparation. The recipe on this page is for quince jelly from an eighteenth-century cookery book, De nieuwe vaderlandsche kookkunst (‘New national art of cookery’, 1797). The recipe uses the cooking liquid from boiling quinces to make a clear jelly. The quinces themselves are not mentioned, I suppose these are used in other dishes. So, the recipe on this page is a way to use the leftovers of cooking quinces.

The recipe is from the eighteenth century, but quince jelly is of all times. This jelly is not the same is French pâte de coing or Spanish dulce de membrillo, because those sweets also contain the fruit itself. Regula Ysewijn made a recipe for a beautiful dish with quince from an eighteenth-century English cookery book: quince cheese. However, the quince jelly on this page is crystal clear clear because obly the liquid in which the quinces were cooked was used.

Apples and pears are sold under the name of their variety: for example Braeburn apples, or Doyenné de Comice pears. But – at least in the Netherlands – quinces are just sold as quinces. The most aromatic ones have a downy surface, which must not be wiped away because that protects the quince. Also, fresh quinces are NOT wrinkled. That is what a greengrocer tried to tell me, that that was the way all quinces looked. No. Those are just old.

GELéE VAN QUEEëN, in een vorm.
De queeën geschild zynde, snydt men ze in stukjens, die men in water laat uittrekken: kook ze vervolgends eenvoudig, naar gewoonte, gaar; doe voords het nat dat ‘er op is door een zeef; roer ‘er dan een pond suiker door, en laat het weder kooken tot het styf wordt; men moet onder dit kooken wèl op het schuimen passen: gaar zynde doet men de gelée in een vorm, die van binnen met amandelöly besmeerd is: laat ze voords in de vorm koud worden, en keer dezelve dan op een assiet om.
Jelly of quinces, in a mould.
When de quinces are peeled, you cut them in pieces that you let stand in water. Then boil them simply, as usual, until done. Sieve the remaining cooking liquid [through a sieve], stir in a pound of sugar, and let this boil again until it becomes stiff. One should not forget to skim during boiling. When it is done you pour the jelly in a mould that has been greased on the inside with almond oil. Then let them cool in the mould, end turn this on a dish.

About my pictures of the quince jelly: I have not succeeded in making the jelly firm enough to be able to let it stand. And when I did succeed, the jelly would not come out of the mould. However, the jelly has a beautiful colour! When I prepared the jelly another time, I added some gelatine (see picture below). 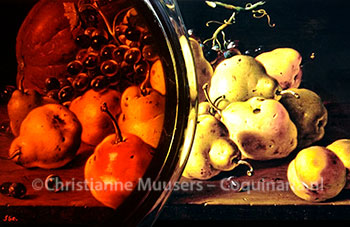 Peel the quinces and submerge them at once in cold water to prevent them turning brown. Cut them in chunks and remove the core. The fruit is very firm, and I speak from experience when I say that using an apple corer on whole quinces will not work, therefore: first cut the quince into pieces, then remove the core. Keep the parings and the core, because these will be used in the cooking of the quinces.

Put the parings and quince cores on the bottom of a pan, then add quinces and water. Bring to the boil and cook gently for about one hour. Strain the cooking liquid, use the quinces for other dishes. Do not add sugar at this stage.

Measure the cooking liquid and add the same amount in weight of sugar (so for 5 deciliter cooking liquid take 500 gram sugar). Bring to the boil, and let it simmer uncovered. Check the viscosity of the liquid every hour. Some apple pectine might be added to speed things up (I didn’t try that), but take care to keep the temperature low, about 100 °C/212 °F. After about three hours the quince jelly had turned into a soft jelly. The colour had changed from light yellow to a deep red.

Grease one or more jelly moulds with a neutral-tasting oil and pour the jelly into them. Let it cool completely.

Variation – Maake a ‘stuffed jelly’ by adding pieces of boiled quince to it. 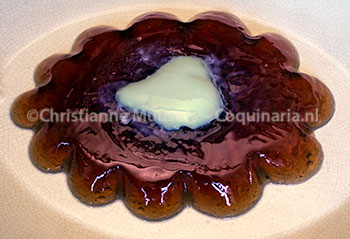 According to the original recipe the jelly can easily be demoulded. Place a serving dish upside down on top of the mould, then turn both together. Carefully lift up the mould and the jelly should appear. As I already confessed: my jelly either lost its form at once, or refused to come out of the mould. I only get a good result when I add some gelatine to the quince jelly. For the picture I filled the bottom of the mould (in the shape of a pear) with some blancmange jelly before topping up with quince jelly.

The jelly is rather sweet and filling. Serve small portions as part of a dessert. It is a decorative dish on a table for a service à la Française.