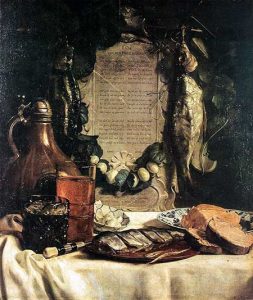 It is time to change that!

In February 2016 I organized a cookery course for the first time in nearly ten years, with members of the re-enactment group Het Woud der Verwachting (litt: ‘the forest of expectation’, after a historical novel by the Dutch author Hella Haasse). The menu was in concordance with the date of the course: the first Saturday after Ash Wednesday. All recipes were dishes for Lent: no meat but lots and lots of fish. One of the fish I chose was pickle herring, but I had to go through a lot of trouble to obtain them. Thanks to the fish company Ouwehand in the coastal village Katwijk I finally obtained a bucket full of pickle herring.

What is pickle herring?

Maatjesharing or soused herring has been frozen for at least 24 hours to kill the herring worm (Anisakis simplex). The fish is not yet fully mature and smaller than pickle herring. Because the herring worm will not survive three weeks in brine, the pickled fish can be eaten safely, even when still uncooked.

Before serving pickle herring, the fish must be desalted. Submerge the fish in cold water that has to be refreshed every six or eight hours. Keep the bowl with the herrings in the refrigerator. When the fish is desalted, it will feel as supple as fresh fish. Then you can clean it (see below). When it is still too salty, it will feel more firm. When you buy whole pickle herring in brine, you can keep it for at least a year in the refrigerator, as long as the fish stays submerged in the brine.

Pickle herring, once a national food, is barely eaten anymore by the Dutch public. They do not even know what it is, and think it is just old maatjesharing. Most pickle herring are now shipped abroad, to Eastern Europe. There the herring is fried or cooked after cleaning and desalting.

Adriaen Coenen (1514-1587) was a Dutch fish trader who lived in Scheveningen, near The Hague. He collected all kinds of knowledge to do with his trade (sea creatures), but also a wide variety of stuffed fish and other objects with which he was present on fairs. People could see his collection for an admission fee. He wrote his knowledge down in manuscripts which he illustrated himself. Two of these have been preserved: the Visboeck (Book of fish) and the Walvisboeck (Book of whales). The Visboeck is at the Royal Library in The Hague (with a beautiful online reproduction in high resolution), the Walvisboeck is in the library of the Royal Society of Zoology in Antwerp, Belgium. There was a second version of the Visboeck that Coenen presented to the Prince of Orange but that manuscript has been lost. 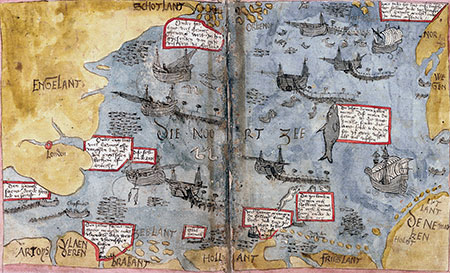 Coenen traded in fish, but he was not a herring trader, that was a separate occupation. However, he clearly loved herring: fresh herring (really fresh, or did he mean soused herring?) is delicious he writes, but it is only consumed be people living along the sea coast. According to sixteenth-century physicians and scientists fresh herring is not healthy food, but Coenen disagrees. If herring was hazardous to your health, God would never have made it taste so good! Still, the contemporary physicians were right: the herring worm that is already mentioned above could make people very sick. But once more: pickle herring is safe to eat.

The picture shows a map of the North Sea from the Visboeck where you can see where the shoals of herring can be found. The North is to the right. ‘Hollant’ is on the bottom, England in the upper left corner. 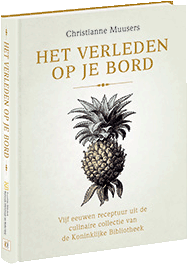 According to Coenen, pickle herring is good food for ‘den arbeits man’ (the labourer), especially when eaten raw with onions. But in other countries pickle herring is always cooked or fried before eating. In my book Het verleden op je bord (The past on a plate) I have presented a recipe from the seventeenth-century French cook François la Varenne on the preparation of this fish. Coenen also mentions that, just like today, foreigners observe Dutch eaters of uncooked herring with admiration tinged with horror.

Below is a conversation that Coenen wrote down in his Visboeck. It took place in Rome. Protagonists are Jacob Duist, a Dutch doctor in canon law, and an Italian nobleman. The subject: eating raw herring. Once a year the Dutch and Flemish ‘expats’ in Rome received casks of pickle herring and dried herring that were send by a boat from Flanders. Jacob Duist had also received a cask, and was enjoying his herring on the street in front of his Roman domicile.

Ende aldus staen eetende soe comter een Eedelman met een knecht after hem verbijt huijs gaen ende sach dat hij desen harinck aldus raeu at sprack in sijn spraeck:
“Haha, eet ghij raeuwe vische, ghij sult morghen doot wesen!”, sprac hij.
Hij antwoorde ende seijde: “Ic hoop neen!”
Hij seijde: “Hebt ghij daer smaeck in?”
Hij seijde: “Ja, wilt ghijt prouen?”
Hij sprack: “Neen, neen! Ic soude morghen doot wesen.”
Ende hij seijde ende vraechde wut wat lant dat hij was.
Hij seijde: “Wt Hollant.”
Hij seijde: “Sijnder wel meer die aldus den Rauwen vischen eeten?”
Ic seijde “Ja”; seijde hij “O”, seijde hij, “Watte luijden souden dit wesen om daer mede ten oorloghe te trecken, men en dorste haer gheen spijse en coocken.”
Ende desen  Eedelen man sant sanderen daechs zijn knecht om te sien of den man niet doot en was die den rauwen visch gegeten hadde. Aldus est sommige varde landen ende luijden een groot verwonderen vanden rauwen pekel of gesouten harinc, hier een goede spijs.
And while he was eating [his herring] a nobleman passed his house, accompanied by a servant. He saw that he was eating the herring raw and spoke to him in his own language:
“Haha, if you eat raw fish, you will be dead tomorrow!” He (the Italian) said.
He (Duist) replied and said: “I hope not!”
He (the Italian) said: “Do you like it?”
He (Duist) said: “Yes, do you want to taste it?”
He (the Italian) said: “No, no! I would be dead tomorrow.”
And he said and asked from what country he was.
He (Duist) said: “From Holland.”
He (the Italian) said: “Are there more over there who eat raw fish in this manner?”
I said “Yes”, said he “O”, said he, “What a people this would be to have in a war, there is no need to cook food for them.”
And the next day this nobleman sent his servant to see whether the man who had eaten the raw fish was not dead.

And so it is that in some countries and by some people there is great wonderment about raw pickled or salted herring, which we consider good food.

Pickle herring as a means of torture

It is essential to thoroughly desalt pickle herring, otherwise the fish is really very salty. It makes a person thirsty. The fish was even used as a means of torture. In the Vaderlandsche historie (National history, Vol.7, 1752) the author Jan Wagenaar describes an event from 1575: a group of vagabonds were arrested in the city of Alkmaar and accused of espionage and treason (the Dutch Republic was at war with Spain that occupied large parts of the country). The tramps were horribly tortured, put on the rack, whipped and scorched “until they were black as coals”. Afterwards they were left to themselves for a couple of nights in a cell on the cold, hard floor. They got nothing to eat except pickle herring and other salted food, and nothing to drink no matter how much they begged for it. The torture continues, but I will spare you further details. 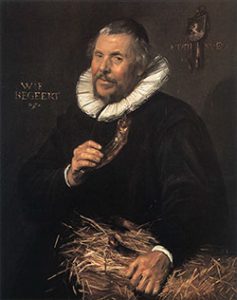 Pickle herring on the stage

Sir Picklehering was a popular figure in seventeenth-century stage plays. Rudolf Cordes describes in his dissertation (see bibliography) on play writer Jan Zoet from Amsterdam how this role was introduced in the Dutch Republic and Germany by John Green’s travelling stage group from England. According to Cordes, the name Picklehering was borrowed by the English from the Dutch, especially from rhetorician Pieter Cornelisz. van der Morsch. In the portait from Frans Hals on the left, Van der Morsch is holding a red herring. The Picklehering on stage is an amalgam of the devil, the Shakespearean Fool and the German Hansworst (John Alexander, see bibliography) who comments on the happenings on the stage with critical and comical asides.

The still life painting Ode to the herring by Joseph de Bray from 1656 containing a poem by his uncle Jacob Westerbaen at the top of this page is well known. But the manner in which the pickle herring is being presented on that painting is not the most interesting one. There are other still life paintings that show the pickle herring presented in a more interesting way. That manner of serving the fish is described below. By the way, it is clear that it is mature pickle herring in the paintings by the roe or milt that is shown along with the fish.

Presenting pickle herring in the manner of the Dutch Golden Age

I have experimented with preparing the herring in the same manner as presented in many still lifes. That is different from how it is done today, but it is not difficult to do. So this time there is no recipe, but instructions on how to prepare pickle herring the old way.
Breakfast dish or first course; preparation in advance 1 to 2 days; preparation 5 minutes (sfter practising; he first ones will probably take longer).

In the middle of the seventeenth century there was a popular drinking song that was called ‘Drinking Song on the Pickle Herring’. Frans Mensonides wrote an interesting article on this song. The page is in Dutch, use Google translate for a (not perfect) translation. The song is from a songbook from the middle of the seventeenth century, the illustration shown on the left is from another songbook, De Nieuwe Haagsche Nachtegaal : Vol van de nieuwste deunen en aartigste zangen (‘The new nightingale from The Hague, with the newest songs and melodies’, Amsterdam, 1659). Three men are playing the game, the pickle herring is on a dish on a corner of the table.

There is an obsolete Dutch saying which compares conceited persons harbouring an inflated self image to the pickle herring: “Hij steekt een borst op als een pekelharing”, (‘He puffs up his chest like a pickle herring’). And indeed, before cleaning, the pickle herring has a rather thick belly.

In a Dutch book with proverbs from 1726, De oorsprong en uitlegging van dagelyks gebruikte Nederduitsche spreekwoorden (‘The origin and explanation of daily used Dutch proverbs’) this saying is pared with another culinary saying that carries the same meaning: ‘Mouse droppings who call themselves peppercorns’.