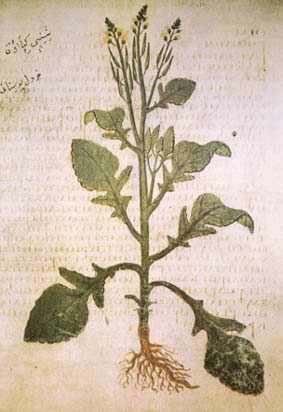 Mustard has always been a popular condiment. Mustard is made from the seeds of several species of the brassica-family (cabbage). From some varieties the leaves can be eaten, and the seeds not only serve to make mustard, but can also be pressed to yield a culinary oil, or distilled to make a medicinal oil. There are black, white and brown mustard seeds (from Brassica nigra, Sinapis alba en Brassica juncea), each with their own specific properties. The first to are indigenous to Europe, the brown mustard has its origins in Asia.

In a recipe from the antiquity mustard seeds are being soaked in vinagre, and mixed with pine nuts and almonds. The recipe of these months is medieval, and uses -or rather: recycles- spices wich were used in other dishes, spiced wine or sauces. That is why a second recipe is being given on this page, of spiced wine, so that you can do your own recycling.

The medieval kitchen used a lot of spices. These came from exotic places, and were very expensive. They were not only used because of their taste and to display wealth, but also because of the role they played in balancing food according to medieval dietetics, the hippocratic humorism. According to this theory, mustard had the same properties as for example pepper. So, mustard was an excellent replacement for spices not only because it was cheaper, but also because it was just as good for a balanced diet.

The recipes are taken from a French book dating from the fourteenth century, called Le Ménagier de Paris. It is not just a cookbook, but a complete guidebook for the wife of a well to do citizen or knight. It was written by her spouse, at her own request (according to the prologue). She was very young (in her teens), and could do with some advice regarding the management of the household affairs of her sixty-year old husband. Besides, she would be widowed at a relatively young age, and so the lessons he bestowed on her would serve her well in her second marriage. 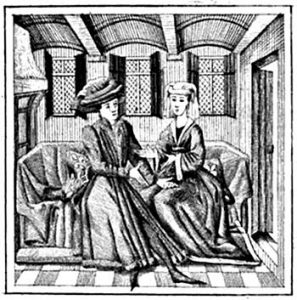 The book can be divided into three parts: The first part concerns the way in wich a good woman was to behave towards God and her husband. This part is enlivened with stories from the Bible and other sources (like Griselda). To describe the virtue of faithfulness in a wife, the Ménagier uses stories about dogs (!).

The second part is the most interesting from a culinary point of view, and concerns itself with the household management: How do you pick a good servant, where can you find a good butcher, how do you organize a succesfull dinnerparty? And of course: How do you prepare (or instruct the cook to prepare) the viands for such a party? The third part is not complete. It was to have a survey of fitting pass-times for a lady, but after a treatise on hawks, horses and dogs the text breaks off.

The writer was not a professional cook, and he concerns himself with subjects wich a professional would never think of mentioning, as for example in the recipe for a dish with green peas. This has to be thickened with egg yolks, and describes worrisome the risks of the process. In the same recipe he vents his mistrust towards dairymaids that dilute the milk with water.
The text is really very interesting, and gives us a glimpse into the doings of a well to do household in France at the end of the fourteenth century. 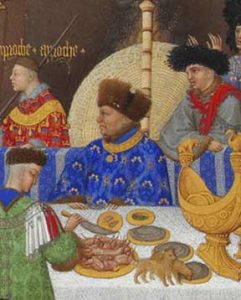 The Ménagier de Paris provides us with a lively and interesting view on the life of a moderately well to do household in France at the end of the fourteenth century. N. Crossley-Holland has written a book on the Menagier, called Living and dining in medieval Paris. The household of a fourteenth century knight (see bibliography). She has identified the anonymous author as Guy de Montigny, a knight who served the duke De Berry. She even identified the building the De Montigny’s may have lived in in Paris (the building has been demolished at the start of the twentieth century, only a photo remains).
Another recipe from the Ménagier on Coquinaria: Mushroom pasties and hippocras.

The original text of the recipe for mustard is taken from Le Menagier de Paris in the edition of Brereton and Ferrier (1981 p.258, see bibliography).

You can just as simple make this mustard with fresh spices, without first preparing hippocras. You can even leave them out altogether. Here you can find a page with several medieval mustard recipes.
Voor ongeveer 600 gram mosterd; Preparation in advance minstens 1 nacht weken; Preparation 10 minutes + minstens 8 dagen rijpen. 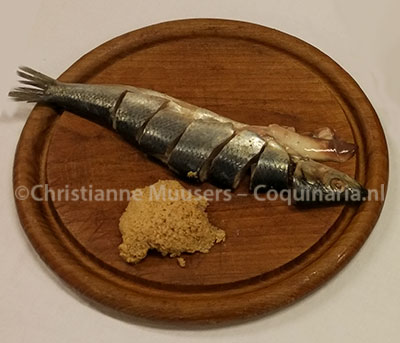 Since must or stum (the freshly pressed juice of winegrapes about to ferment) is available only in wine producing countries in the period of harvesting the grapes, we make the mustard with wine vinegar. Soakthe mustard seeds during the night in white wine vinegar, The vinegar should stand about 2 centimeters (1 inch) above the seeds.

The next morning the mustard seeds have absorbed the vinegar, and become soft (you can crush them between your fingers). Mash them in a blender, and add as much vinegar as is needed to obtain the desired thickness. Add salt and spices. Taste it, be sure there is enough salt in it. Conserve in a sterilized glass jar. The mustard must mature for at least eight days before using it. It will keep indefinitely.

In small dishes on the table. Or use this mustard to prepare medieval dishes.

A lot is a liquid measure, about 3.72 litres (about 5 bottles of wine). The medieval ounce is the same as the Imperial ounce, 28 gram.

White mustard seeds are easier to find in the shops than black ones. White seeds are also softer, and can be crushed more easily. There is a difference in taste: white seeds are spicy, black seeds are really hot. In the Middle Ages both kinds of seeds were used to make mustard. Because Brassica nigra is difficult to harvest by machines, it is less and less cultivated nowadays. The Asian Brassica juncea has replaced black mustardseeds in the production of dark mustard.

The spices that were used in making hippocras can be used for preparing mustard. It says in the original recipe that one can also use spices left over from the making of jellies and sauces. This means other spices as well, for example black pepper, mace, cloves, grains of paradise (can be replaced by cardamom seeds).