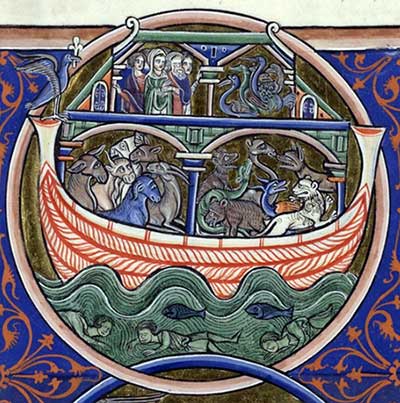 In the Middle Ages the catholic church prescribed what was on the daily menu. Each week counted at least one day, and more often three or even four days (depending on where and when in medieval Europe) during which no meat was to be eaten. For many catholics Friday was still an obligatory ‘fish day’ until well into the twentieth century. This was a weekly reminder of the death of Jesus on the cross on what we call Good Friday. Other possible obligatory days of fasting were Wednesdays (because of Judas’ treason) and Saturdays (to honour the Virgin Mary). On top of this weekly cycle, there was an annual cycle of fasting days: the Ember Days (these mark the beginning of the new seasons, in December, March, June and September), Advent (the four weeks before Christmas), and Lent (the six weeks between Carnival and Easter). Added together, this means that to the medieval christian, meat was prohibited foodstuff during a third to more than half of all the days in the year (even if he or she could afford it). By the way, there are 46 days from Ash Wednesday to the Saturday before Easter, but Lent is a forty-day fast because the six Sundays were exempted.

But why was fish allowed?

The eating of fish was allowed, Lent was not a ‘vegetarian’ period. A simple (perhaps too simple) explanation is that during the Biblical Flood, meant to punish mankind for its sins, all fish survived. It was clear that fish were free of all sin. On the picture from the Psalter of the French king Louis VIII and Blanche of Castile the Ark with Noah’s family is floating on the waters. On the prow the dove, holding an olive branch, has just landed. The guiltless fish are swimming alive and well between the sunken bodies of sinners.

An other explanation is that meat, especially red meat, would ‘heat’ the human body according to the medieval health theory. This means that the body was more susceptible to lust. Medieval theologians saw a connection between the sins of the body (our ‘meat’) and the eating of meat. But fish on the other hand had a cooling effect on the human body. Eating fish would lessen any sinful inclinations of the consumer.

For people living near the coast, fishdays were no great hardship: seafish was easy to come by. When you lived inland you had to rely on either freshwater fish or conserved fish as stockfish and other salted and/or dried fish. Those who could afford it owned fishponds to be assured of an ample supply of freshwater fish.

The menu during Lent

During the six weeks between Carnival and Easter (the forty days of the withdrawal of Jesus into the wilderness, minus the Sundays) there was an extra prohibition. Not only meat, but also milk, butter, cheese and eggs were banned from the table. In February and March, at the end of winter, supplies ran low, and what was left of fruit and vegetables was old, wrinkled and mouldy (except of course for some vegetables like winter leeks, cabbages and in Italy broccoli).

The staple diet consisted of bread, porridge or gruel made of grain (rye, spelt, wheat), peas (pea soup!), salted or dried vegetables, fish (fresh and preserved), onions, leeks, (old) apples, nuts, and for the wealthy dried dates, figs, raisins and currants, and almonds. Almonds were very important, because these were the basis for almond milk, almond butter, and even almond cheese. All of these were used as replacement for forbidden dairy products (let it be clear that around the Mediterranean Lent was less drastic, because in those regions the basic cooking ingredient was olive oil, not butter or animal fat). Imagine how interested the medieval cook would have been in something like vegetable margarine!

If you want to partake of Lent the medieval way, you’ll have to limit yourself to one meal a day between Ash Wednesday and Maundy Thursday, and abstain from all meat and dairy produce. Allowed foodstuff: fish, vegetables, legumes, grains, wine and beer, sugar and honey, fruit, dried fruits and nuts. The medieval way means only using vegetables and fruit that are local and in season!

More about Lent can be read on this site by Ken Collins. Also, see this article by Christina Nevin on the site of the Phillipine Society of Medieval Studies.

Lent during the seventeenth century

Here you can read more about Lent in seventeenth-century France, especially Good Friday. 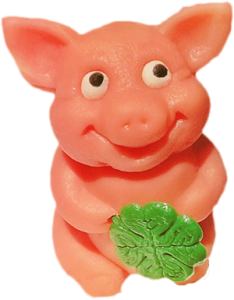 The spelling in the recipe is exactly as in the original manuscript. This means that -even for Dutch people- it will be more difficult to understand. For example, j and i were interchangeable. Read jn as in. The manuscript, which is conserved in the Royal Academy in Gent (Belgium) as nr.15, is a convolute. It consists of several separate smaller manuscripts, which at some point in time were bound in one volume. There were four such manuscripts, three with mainly culinary recipes, the last with medicinal recipes. The culinary parts of KANTL Gent 15 have been published by W.L. Braekman, and on this site is a more modern online edition with translations in modern Dutch and English (see bibliography).
The recipe for fake fish also appears in the Nyeuwen coock boeck (New cook book) by Gerard Vorselman from 1560 (edition Cockx-Indestege, see bibliography). It has a source in common with the first part of the convolute. The variation of the recipe, for fake calf’s ears (see below) is mentioned in another Middle Dutch manuscript, UB Gent 476 (edtion Jansen-Sieben and Van Winter, see bibliography), in a recipe for purple apple sauce. It begins with: “Make apple sauce the same as for calf’s ears” (recipe nr 65, p.86).

To make formed fish during lent and also calf ears.

Crush in a mortar five or six apples, peeled and cored. Add sugar, ginger and cinnamon, and add some pound almonds or toasted gingerbread with some saffron. Bake this in oil. Or make a big fish: bake this in the oven, painted and with some holes in it.

When you think of it, a period of six weeks in which all you get to eat besides fruit and vegetables is fish, fish and again fish is rather wearysome. It seems however that some people hadn’t had enough of fish yet, hence this recipe for apple pie in the form of a fake fish, especially for Lent. The recipe has a variation: you can also prepare mock meat in the guise of calf’s ears. The fake fish is a closed apple pie, or resembles apple dumplings, according to which size you make it. The calf’s ears are deep fried pastry, formed like the ear of a calf, and filled after frying with the uncooked stuffing that is also used in the apple pie or the dumplings.

In the original recipe there is no mention of any dough for the fake fish. It is just the stuffing that is described. However, in the previous recipe in the manuscript, which is for fake fish outside Lent, it is stated clearly that the apple stuffing is meant to be packed in dough, and then baked in the oven for half an hour. Moreover, the recipes before and after these fake fish are for “roffioelen”, small pastries. The stuffing for fake fish outside Lent is made with apples, eggs and butter.

Recipes for dough are scarce in medieval cook books. I have taken the liberty of creating a lenten dough myself. It is a kind of puff pastry made with oil and ground almonds instead of butter and eggs. The result is a supple, elastic dough which is easy to roll out. If you add sugar this dough could even be used for modern sweet cakes (low on cholesterol!). In an English manuscript from the fifteenth century (edition Hieatt, see bibliography) there is a recipe for ‘hattes in lentyn’ (small pastries formed like hats, with a stuffing made of fish and dried fruits). The crust is made with “past of paryd floure knodyn with milke of almondys, & put therto a lyttyll safron”. So my recipe for this pastry is not anachronism!

A large pie for 12 to 24 persons. Halve the amounts for a smaller fish; preparation in advance 20 minutes + one hour rest; preparation 1 hour and 15 minutes. 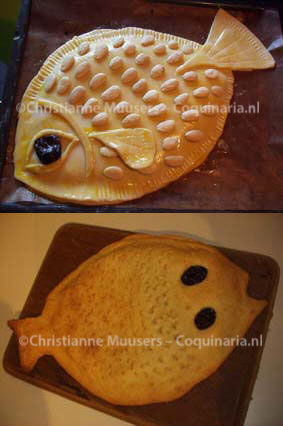 Prepare the dough – Mix all the ingredients well together. The given quantities are relative: add water or flour according to whether the dough is too crumbly or too sticky. Knead until there is an smooth elastic dough. Cover with plastic foil and let it rest for an hour in the refrigerator. Half an hour before rolling out the dough, take it out of the refrigerator.
Make the stuffing – Put everything in the blender. 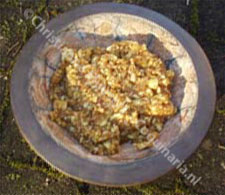 Preheat the oven at 200 °C/390 °F. Divide the dough into two. Roll out the first part to an oval form. Use a pizza roller or a knife to cut out the form of a fish. Arrange the fish on a baking tray. Sprinkle some toasted breadcrumbs on the dough, to absorb the moisture of the stuffing. Spread the stuffing on the dough, leaving free the outer rim of the dough.
Roll out the second part of the dough, and cut the second fish, which is to cover the stuffing. Make two holes in it, one where you would expect the eye of the fish, and another near the tail. Place this second fish on the stuffing, and press the rims of the two fish well together. Now you can form fins, tail, gills, scales, whatever you want, to give your fake fish a realistic appearance.
Place the fake fish in the middle of the oven, bake for 45 to 60 minutes.

This apple pie can be served either hot or cooled to room temperature. In the fifteenth century this ‘fish’  would have been served alongside with real fish. Now we serve apple pie for dessert, or with tea or coffee. However, this apple pie is spicier then the average modern apple pie, especially when it is made with gingerbread instead of ground almonds.

Almonds have a high fat content, which makes them diffivcult to grind; the result will be a paste rather than flour. It is best to buy ground almonds.

The “peperkoek” or “ontbijtkoek” that you can buy in Dutch supermarkets is made of rye flour, honey and spices. Although probably not the same thing as meant in the original recipe, it can be used as a substitute. But, since the recipe mentions ground almonds as an alternative, you could use these instead. See this recipe for Dutch peperkoek.

The orange-red stigmas of a crocus. In medieval times (as in modern times) it was used to colour dishes yellow. When using gingerbread in this recipe instead of ground almonds, you can leave out the saffron. The colouring of saffron is too subtle to compete with the dark colour of toasted gingerbread.

Actually, these were days of abstinence: fasting means not eating anything, while abstinence means not eating some things. Fasting is what Muslims do during the Ramadan between sunrise and sunset. The Christian Lent meant abstinence of all food of animal origin. Ideally there was only one meal a day. The money thus saved was not to be used for oneself, but should be given to the poor (or the church).

A medieval recipe for fake-fish or applepie during Lent
A Dutch recipe from the fifteenth century for applepie in the guise of a fish, especially for Lent.
© Author Christianne Muusers