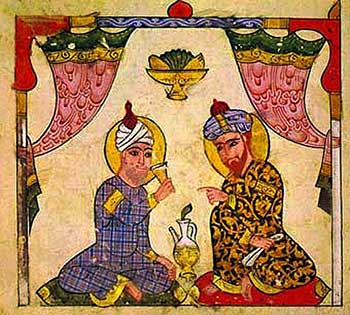 During the caliphate of the Abbasides (749-1258 AD) the Arab cuisine was at its prime. In its heydays the Caliphate spread from modern Tunesia to India. The culinary arts were highly regarded. Poets composed works on their favorite dishes, cookbooks were dedicated to the caliphs. There were also scientific works on the properties of all kinds of foodstuff and the effect they had on human health. Many Greek and Latin works were translated into Arabic. This Arabic knowledge spread throughout Europe through translations in Latin made on the Iberic paeninsula.

The influence of the Arab kitchen on the European one is undeniable, but the extent of this influence is hard to determine. A number of exotic ingredients became known in Europe through the Arabs: rice, spinach, eggplants, apricots and lemons, to name a few. Arabs were also middlemen in the spice trade between Europe and the Far East. Direct influence from Arabic culinary texts however seems very small. There are dishes which are called Saracen in medieval European cookbooks, but these cannot be traced to Arabic recipes. These dishes are often prepared with dried dates, figs, raisins, or are coloured heavily. The Arabian cuisine itself has been influenced primarily by the Persian culinary arts, but also by the Bedouin and Turkish kitchens.

On this page is an Arabic recipe for meatballs of lamb in eggplant sauce. More medieval recipes from the Arabian cuisine on Coquinaria: Spicy meatballs, Pasties with eggplant and spinach stuffing, Stir-fried lamb, Deep-fried braids and Sugar Candy.

Arabian science formed a bridge between the knowledge of Antiquity and the European Middle Ages. One subject was the properties of foodstuffs and the role they played in the health balance of persons. Many texts were translated from Greek and Latin into Arabic. These generated new texts that were translated back into Latin on the Iberic peninsula and spread out over Europe. One example is the Tacuinum Sanitatis, written in the eleventh century by the physician Ibn Botlar. In the thirteenth century this book was translated into Latin. Tacuinum is a Latinized verion of the Arabic word taqwm, that means ‘table’ (in the meaning of ‘chart’). Literally, Tacuinum Sanitatis means ‘health table’. Not only foodstuffs were described, also the workings of the seasons and even the directions of the wind, with their effect on our physical health and possible remedies. This schematic knowledge of the humoral pathology is based on wotks of the Greek-Roman physician Galen (second century aD) and Hippocrates (around 400 bC). Several beuatifully illustrated manuscripts of the Tacuinum Sanitatis were produced in Italy att the end of the fourteenth century. You’ll find several miniatures from these manuscripts elsewhere on this site (1, 2, 3), and below you’ll see another one.

Buran, a dish with aubergines

I had already chosen the recipe for Buran before reading the paper of C. Perry on the history of this dish (‘Buran: Eleven hundred years in the history of a dish’, see bibliography). The reason I chose it was because it was so delicious! Here is a very short summary of his paper. To grasp the finer points you must absolutely read the paper itself.

The dish Buran is named after the bride of caliph  al-Ma’mun. The wedding was in 825 AD (222 AH, the islamic era). The nuptials must have been splendid, in luxurious festivities as well as in luscious banquets. Dishes called Buran appear in the middle of the tenth century. Eggplant was an exotic fruit in ninth century (AD) Baghdad. Originating from India, it was at first mistrusted. It was supposed to be bad for your health, and the inherent bitterness of the eggplant did not help its popularity. Perry presumes that Buran was the first recipe in which the eggplant was first parboiled in salted water to remove the bitterness, and thus helped making the eggplant acceptable. The oldest dishes named Buran contain no meat. Perry traces the history of the dish through the centuries and regions, with variations with meat, with vegetables and grains, and even variations without eggplant.

The extra recipe, South-Italian from the fifteenth century, is a descendant of the meatless Buran. Sicily was ruled by Arabs until the end of the eleventh century, and the Duchy of Naples was by turns ally and enemy of Mohammedan Sicily. This proximity is also noticeable in the kitchen.

A descendant of the dish Buran can be found in a fifteenth-century Italian cookbook: aubergines in augergine sauce. The island Sicily was an islamic Emirate until the end of the eleventh century, and the Duchy of Naples was alternately ally and enemy of the Sicilian Emirate. That relationship is also noticeable in the kitchen.

The Kitab al-Tabikh, a thirteenth-century cookbook from Baghdad

The text for this recipe is given only in English. The recipe is from the Kitab al-Tabikh, published by A.J. Arberry in 1939 as A Baghdad Cookery Book. This edition is reprinted in the splendid volume Medieval Arab Cookery, which contains essays on and translation from medieval Arab culinary texts, edited by M. Rodinson and C. Perry (Prospect Books, 2001). Charles Perry published a new edition and translation in 2005 (A Baghdad Cookery Book, see bibliography).

The cookbook Kitab al-Tabikh is written by Muhammad ibn al-Hasan ibn Muhammad ibn al-Karim al-Katib al-Baghdadi in the year 1226 AD (623 AH). Nothing is known of the author. The manuscript, an autograph, was discovered and edited in 1934 by the Iraqi scientist Daoud Chelebi. Later other, extended versions of the same cookbook were discovered, such as the Kitab Wasf al-At’ima al-Mu’tada (also published in Medieval Arab Cookery).

Like the recipes in European medieval cookbooks, the Arabian recipes are meant for the upper class. All then-known vegetables, fruits and herbs are used. Chicken is highly regarded. Sheep and lamb are prepared. Spices are also highly regarded, including some that have not or only very rarely found their way into European kitchens, such as musc and betel.

Like the recipes in European medieval cookbooks, the Arabic recipes are meant for the upper class. All known vegetables, fruits and herbs are used. Chicken is highly regarded. Sheep and lamb are prepared. Spices are also highly regarded, including some that have not or only very rarely found their way into European kitchens, such as musc and the betel nut. Elsewhere on Coquinaria is a recipe for spinach from the same cookbook.

The original text is Arabic, and that is a language I have no knowledge of. That is why I offer the English translation of Charles Perry. Edition: ‘A Baghdad cookery book’, p. 58. (see bibliography)

Buran. The way to make it is to take eggplant and boil it lightly in water and salt, then take it out and let it dry awhile, then fry it in fresh sesame oil until it is done. Peel it and leave it in a plate or large bowl, and mix it well with a ladle until it becomes like a pudding. Throw in a little salt and dry coriander. Then take Persian yoghurt, mix garlicwith it, throw it on that eggplant and mix well with it. Then take lean meat and beat it well [and make it into small meatballs], and take fresh tail fat (sc. and melt it), and throw the meatballs into it and stir them until they are browned. Then cover them with water and boil them until the water dries up and they return to their fat (i.e. begin to fry in the fat). Put them on the surface of the eggplant, sprinkle with cumin and finely pounded cinnamon and use it.

Tailfat from sheep may be hard to come by. You could use sesame oil and/or olive oil instead. Lard can’t tbe used, as that is pork meat.
First course or side dish for 6 to 10 persons; preparation in advance 1 hour; preparation 15 minutes. 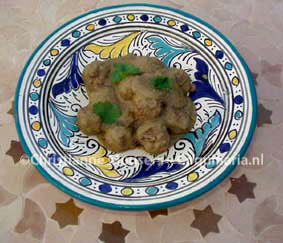 Boil the eggplant for five minutes in water with salt. Let it drain, cool and dry. Heat oil in a casserole and stew de eggplant on a very slow fire with the lid on until it is very soft (30 to 45 minutes). Turn the eggplant a couple of times. Pull the skin off the eggplant, and mince the flesh with a fork or in a blender. Temper with yoghurt, garlic, salt and ground coriander.

Form small balls of the minced lamb meat. Choose a casserole in which the balls fit snugly. Heat sheep fat or oil, fry the meatballs until they are brown. Pour enough water in to cover the balls. Let it simmer until the water has evaporated. Add the eggplant sauce to the meatballs, heat through. The modern cook would add some salt and pepper to the meatballs.

Serve the meatballs in the casserole, or on a dish. Sprinkle with ground cumin and cinnamon just before serving. If you want to add some colour, garnish with fresh coriander leaves.
In Arabic medieval cookbooks dishes are often served in the pan in which they were prepared. The rim is wiped clean, and sometimes the food is sprinkled with rosewater. 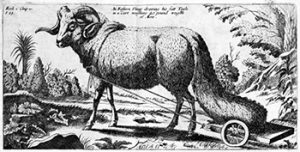 In Europe and large parts of the world there are sheep with small, thin tails. However, in the Middle East and North Africa you find since prehistoric times the so called fat-tail sheep. Every one in four sheep in the world is a fat-tail sheep. These sheep store the fat in the tail, instead of throughout their body. The tail is enlarged because of the fat. This storage of fat in the tail results in lean meat. The tail fat, which melts at lower temperature, was much appreciated in the Middle Ages in the Arab cuisine, not only to prepare meat, but also in sweet dishes. (source: Alan Davison, The Oxford Companion of Food).