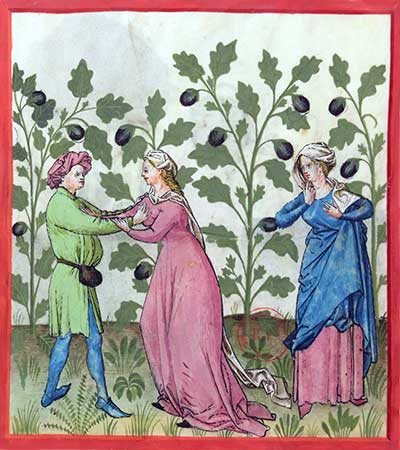 This recipe for aubergines (eggplants) with aubergine sauce was chosen because of the possible connection with an Arab recipe with aubergines. It is from an Italian cookbook from the end of the fifteenth century that has been published by Terence Scully as The Neapolitan recipe collection. ‘Cuoco Napoletano’ (see bibliography). The Southern part of Italy has been influenced by Islamic culture: until the Normans conquered it in the eleventh century, Sicily was an Emirate. More about the cookbook can be read on the page with a recipe for Zabaglione.

The picture shows ripe fruit of the Malongiana (aubergines or eggplants) in a Tacuinum Sanitatis (more about that can be read here). According to this originally Arabic health table aubergines are warm in the fourth degree and moist in the third degree. Maybe that explains why the man is groping the wrong ‘aubergines’.

From the edition by T. Scully of the Cuoco Napoletano (see bibliography), recipe nr 33. 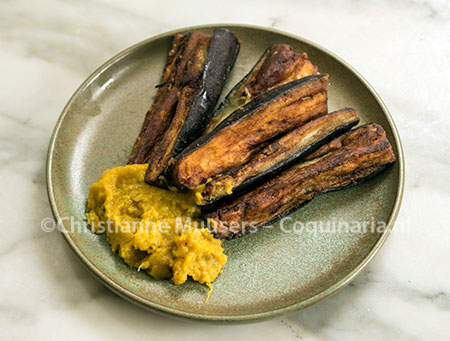 Peel one aubergine. Cut all aubergines lengthwise in four parts.
Blanch the pieces in salted water for 1 minute. Drain them and pat them dry.
Heat the verjuice and the vinegar and crush the saffron threads in it. Meanwhile, cut the white bread without crust in small pieces, then pour the saffron liquid over it.

Sprinkle the aubergine pieces with flour. Bake them in a layer of olive oil until browned, then drain them on kitchen paper. Keep the unpeeled pieces of aubergine hot in the oven while making the sauce, or reheat them just before serving.
Make the sauce – Take the peeled pieces of aubergine and purée these in the blender together with garlic and the bread with saffron-vinegar. Add a little water if the sauce is too thick. Add oregano, pepper and salt. Just before serving, heat a little olive oil in a small pan and put in the sauce. Stir on a low fire until hot.

At once. Sprinkle a little sugar and cinnamon over the dish if so desired.

This is the green juice of sour, unripe grapes that was used in the Middle Ages and up to the eighteenth century. You can still buy it, but you may have to look for it. In the Netherlands verjuice was also made from unripe apples and sorrel. You can use applecider vinegar as a substitute.
Make your own Verjuice.

Aubergines in aubergine sauce, a medieval recipe
An interesting way to serve aubergines from an Italian recipe from the fifteenth century.
© Author Christianne Muusers