Unchanged through the centuries 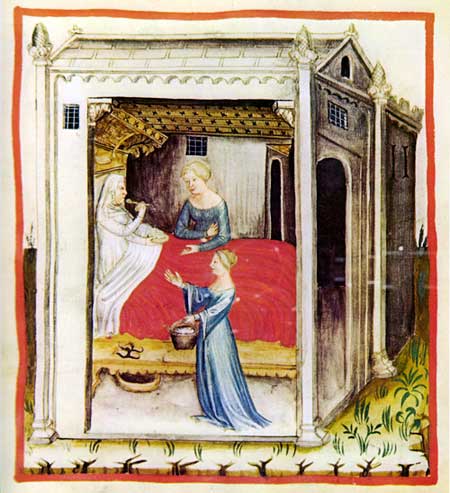 There was no country called Italy in the Middle Ages. There was a peninsula, divided into small counties and duchies, and the Vatican of course. But the Italian (regional) kitchen had already those characteristics it still has today. Elsewhere on this site you’ll find recipes for sixteenth-century recipes like crostini with mozarella and tortellini in brodo, on this page is one of the earliest recipes for a typically Italian dessert, zabaglione. The French adopted this dish at the beginning of the nineteenth century as sabayon.

Depending on the ratio zabaglione/other ingredient, this dish can be considered a kind of custard or a sauce: One sliced strawberry on a bowl of zabaglione and you have a custard, a bowl of strawberries with zabaglione on top, and you have a sauce. In the sixteenth century, zabaglione was also served as a drink (see below). It was especially served to sick people and pregnant women. On the picture on the left a bedridden woman eats something out of a bowl with a spoon. It would be nice to be able to state that she eats zabaglione, but in fact this miniature from the Tacuinum Sanitatis represents eating savich, or barley gruel.
The zabaglione on this page however, is not for the ill or pregnant, but for a jolly company (il compagnone = ‘gezelligheidsdier, according to my Italian/Dutch lexicon, which in turn can be translated as ‘convivialist’ or ‘ egregious person’ in English. Although, maybe ‘party animal’ is a more litterally translation).

How to thicken a preparation with egg yolks

Zabaglione is a warm egg custard. And yes, here we have the tricky one: heating raw egg yolks! This should be done stirring carefully and continuously, or you’ll end up with a lumpy, unappetizing mass. Take your time, resist the urge to increase the heat, and all will be fine. Medieval cooks were experts in preparing dishes on open fire, but this dish must have been a challenge. The recipe below, from the fifteenth century, clearly is written by a professional who deemed it unneccessary to go into details on how to thicken a dish with raw egg yolks. Because “Let boil until it is thick as good soup” really is not a good instruction for a beginner! One century later Bartolomeo Scappi wrote in his Opera (1570) a detailed instruction on how to prepare zabaglione: in a small kettle that is placed in boiling water in a copper cooking basin (edition VI.64), a bain marie avant la lettre. In another recipe in the Opera the zabaglione is prepared in a tinned copper pot that is placed at a distance from the fire (edition VI.67). In a recipe for zabaglione from a previous chapter (edtion Scully II.163, see bibliography). Scappi describes using a rinned copper pot or small kettle that fits on the mouth of a pitcher (cucumo, see picture below) that is filled with boiling up to the bottom of the kettle. The space between kettle and jug is sealed (maybe with dough), and after a half hour the contents of the kettle have thickened enough. But never cease stirring! 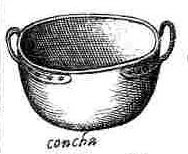 The recipe for the zabaglione below dates from the second half of the fifteenth century. It’s from a cookbook known as Cuoco Napoletano (edition p.88/9). The text exists in just one manuscript that belongs to the Pierpont Morgan Library in New York. There are 90 leaves (180 pages), with 220 recipes and menu’s of five elaborate meals. According to Scully, who published an English translation in 2000, recipes and menu’s are in one and the same hand (edition Scully p.5, see bibliography). The zabaglione recipe literally stands apart: all by itself after the five menus that follow the other recipes. The menus conclude with a finis, which is repeated after the recipe.
In his comments to the recipes Scully mentions a version for zabaglione from another manuscript that appears to be more recent than the Cuoco Napoletano, the Libro de Cosina (conserved in the municipal archive of Riva del Garda in Northern Italy). This manuscript is itself an older version of the famous Libro de Arte Coquinaria by Maestro Martino de Rosso (see bibliography), and that cookbook in its turn was used by Bartolomeo Sacchi (Platina) for his De Honesta Voluptate et Valetudine (edition Milham, see bibliography). Scully provides arguments for the Cuoco Napoletano being the oldest version by a comparison of text fragments of both the Cuoco and the Libro. (Scully 2000 pp.245/248, bibliography). 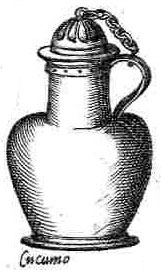 The zabaglione from the Libro de Cosina is more or less identical to the one from the Cuoco Napoletano (although different amounts are used), but there are two nice little remarks added: this is served at night before going to sleep, and it stimulates the brain (“E questo da a la sera quando l’homo va a dormir. Et notta ch’el conforta lo cervello.” Scully 2000 p.173, see bibliography). The recipe for zabaglione is not found in the Libro de Arte Coquinaria, nor is it mentioned by Platina. In the Opera from Bartolomeo Scappi (1570, edition Scully 2008, see bibliography), another Italian cookbook, on the other hand several recipes for zabaglione can be found. One is reinforced by adding chicken stock (edition Scully 2008, II.163), and there are two versions for the ill, one with water instead of stock which is given to pregnant women (edition Scully 2008, VI.64), and an extra nourishing one with stock, almond milk and rose water (edition Scully 2008, VI.67). All three also contain egg yolks, sweet wine, sugar and cinnamon, and can be served as drink or thick soup.

From Cuoco Napoletano (edition p.88/9). See above for information on the text. The translation is mine.

In the recipe the zabaglione is served in one big bowl for several people, as was usual in those days. If you reckon that four people shared a dish, and eggs were smaller (as were the hens which laid the eggs), it is clear that this was a small side dish. The amounts mentioned would have been for sixteen persons. This modern version is for four to eight people, depending on the menu and whether you serve zabaglione as sauce or custard (see the picture below).
Dessert for 4 persons; preparation in advance 5 minutes; preparation 15 minutes. 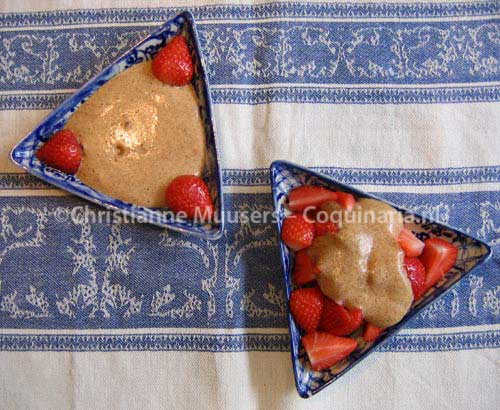 Combine egg yolks, cinnamon and sugar in the pan or bowl you plan to heat it in. Beat until frothy (with whisk or electrical mixer), then pour in the wine, while you keep beating the mixture.

There are two ways to prepare this dish. To be on the safe side, you can use the au bain marie method (in that case, use a metal bowl that is a good thermal conductor) or a sauce pan with a thick bottom. See here for preparing this dish au bain marie. If you choose for preparing it directly in a sauce pan or skillet, keep watching that the heat is not too high, or you’ll end up with a lumpy mass. Equally important is to keep stirring. If using an electrical mixer, the heat can be turned higher. It takes five (mixer in sauce pan) to fifteen (whisker au bain marie) minutes for the zabaglione to thicken. 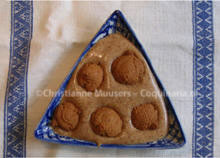 At once, because the custard should be warm if butter must melt upon it. But without the butter you can also serve the zabaglione at room temperature or even cold. Use more sugar and no butter in that case.
Use small dishes or -more modern- coupes. Modern recipes often suggest sponge-fingers or other cookies (biscotta, even amaretti, see picture to the left). These medieval wafers would also be an excellent combination.
Other suggestion: as a sauce on fresh fruit or sweet pastry. Fresh fruit with cake, whipped cream and zabaglione resemble trifle. Last idea: fresh fruit, zabaglione on top, sprinkle with icing sugar and put under the grill or torch for a few moments.

In the metric system, which was first introduced in France in 1791, one ounce is 100 gram. Before that time, and still in the Imperial and American systems, an ounce is about 28,35 gram.