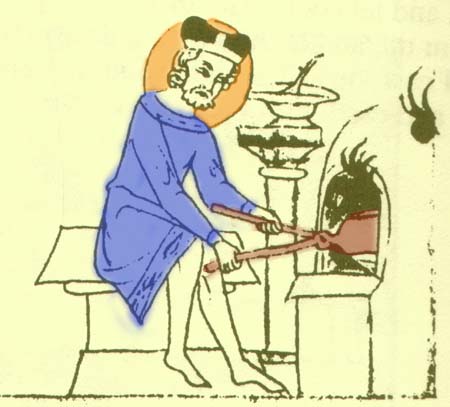 Wafers are delicious and easy to make. Actually they are a kind of ‘pressed pancakes’. According to The Oxford Companion to Food wafers are thin and crisp, waffles are thicker and made with yeast. The recipe on this page is for thin wafers.
The miniature is from the Velislav Picture Bible, which was created between 1325 and 1340 in Bohemia. It depicts king Wneceslaus baking hosts from wheat he harvested himself, to be used during the Holy Sacrifice.

Wafres aren’t baked in an oven, but in a waffle iron. This kitchen aid was ‘invented’ in the thirteenth century. Those early wafers weren’t always of the sweet variety, there are also many recipes for cheese wafers. The waffle iron consists of two hinged iron plates attached to two long wooden handles to protect the baker from burning his hands. The plates already had the typical wafer pattern. but there were also plates elaborately stamped with family crests, religious symbols, figures, or landscape scenes. Mostly the plates were rectangular, some irons had plates to bake round wafers or waffles.
On one of the preheated and greased plates some batter was poured, then the plates would be closed. After a couple of minutes your wafer is ready. Prior to the invention of the waffle iron the batter for wafers was used to bake flat pancakes in frying pans with long handles. Nowadays you can buy electric waffle irons. I have one too, it makes excellent waffles and wafers.

A famous Dutch wafer is the syrup waffle (in Dutch stroopwafel)  from Gouda: two thin, round wafers with sugar syrup in between. It is said on many websites that copy from each other that the syrup waffle was ‘invented’ in 1784 by a baker in Gouda who wanted to use leftover produce: he crumbled cookies, made that into a dough and baked waffles of it. None of those website mention a source. Other sites place the time of origin at the beginning of the nineteenth century. In the beginning of the twentieth century the manufacturing of syrup waffles grew out to a complete industry. Me, I love syrup waffles!

Another much eaten wafer, which many don’t even recognise as such, is the ice cone. That is a thin wafer which has been rolled in a cone-shape immediately after baking. This brilliant way of consuming ice cream originates from the United States. Two bakers had the same idea, independently from each other, in resp. 1896 en 1904. (You can read more about that on this site).

Anyway, the historical recipe on this page is a combination of two recipes from the Middle Dutch convolute KANTL Gent 15, dating from around 1500. Elsewhere on this site you can find an edition of this medievalconvolute.
And simply because I like it I have added a recipe for whipped cream. Nowadays it seems whipped cream comes out of spray cans (often it isn’t even real whipped cream). I have seen small children spraying the whipped cream straight from the can into their greedy little mouths. In 1500 whipped cream was something you had to work for: the whisk was a stick with a split end. The resulting white foam was poetically called snow.

The recipes come from a convolute. This is group of different manuscripts that were bound in one volume but written separately. The four manuscripts in the convolute of Gent were indeed produced at different times, but in a relatively short period of time and in the same household. The first three parts contain culinary recipes, and were published in 1986 by the Belgian ethnologist and culinary historian W.L. Braekman (1931-2006; vol.1 separately and vols 2 and 3 together, see bibliography), the fourth volume with just medicinal recipes hasn’t been published yet. The first recipe below is from vol.1 (Braekman edition p.36, recipe nr 83), the other two from vol. 2 (Braekman resp. edition p.56 recipe nr 82 and p.80 recipe 197). However, I use my own transcription, straight from the manuscripts. 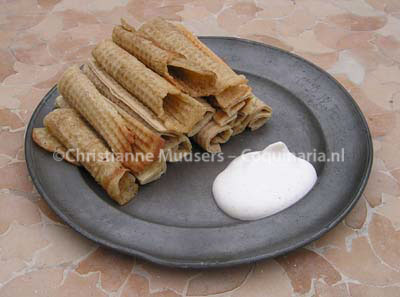 Melt the butter without browning it. Temper eggs, wine and rose water, add the melted butter. If you want to make the wafers into rolls you’ll need 200 gram butter, if you leave them flat 100 gram is sufficient.
Mix flour, sugar, powdered ginger, cinnamon and salt. Pour in the liquids whilst stirring, and keep stirring until you have obtained a smooth batter.

Heat a waffle iron with plates for thin wafers. If you have an authentic waffle iron you’ll have to heat it on a coal fire or maybe a barbecue. If you have an electric one, just plug it in and switch to “on”. Grease the inside of the irons with a little butter.
Spoon some of the batter on one of the irons and squeeze the irons shut. Bake the wafers to a nice golden brown colour (my electric waffle iron takes about four minutes).
Open the iron, remove the waffles, cut them and roll them if you want to. Do this straight away, when the wafers are still pliable. When the wafers have cooled they are more or less hard and crispy. Let them cool on a rack.
Whip the cream to a fluffy comsistence. Use a whisk or an electric mixer (when using an electric mixer, do not whisk at full speed or you’ll end up with butter instead of whipped cream). You may even use a small stick with split ends if you want to!
Once the cream is whipped, add sugar and rose water.

Wafers are at their best when eaten whilst they are still fresh. You could reheat them in an oven at moderate temperature. Do not use the microwave oven, the wafers will become soft. Serve with snow, or stuff the rolled wafers with the cream. These wafers go very well with clareit, wine with honey and spices. 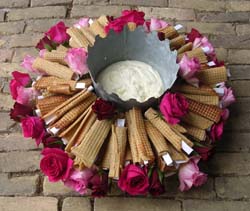 I have baked these wafers for the opening of an exhibition on the Sidrac-exhibition in the Utrecht University Museum. The Sidrac is a medieval  question-answer text that covered scientific disciplines as they were in the Middle Ages. The original idea was to hide questions from this text  in little balls which were to be put in a lucky bag. But in the end it was decided to roll the questions in the baked wafers, just like chinese fortune cookies. However, as far as I know it was not a medieval european custom to hide texts in food. Moreover, Fortune Cookies are not an ancient chinese custom, not even chinese! The first fortune cookies were baked in California in the beginning of the twentieth century. Later tourists in Asia asked for the cookies as dessert. That’s how the fortune cookies came to China. (more information on the history of Fortune Cookies)