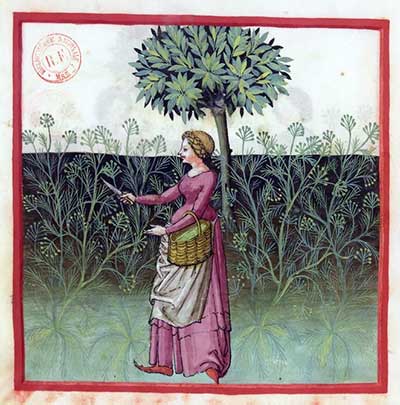 Recipes for bread from the distant past are rare. The recipe on this page was inspired by the description in the Nyeuwen cooc boeck (New Cook Book) by Gheeraert Vorselman (edition Cockx-Indestege 1971, see bibliography). Actually this is a description of a kind of flat, unleavened bread, but I added yeast to it.

The picture from the Tacuinum Sanitatis shows a woman harvesting fennel seed. In the Middle Ages the seeds were often sugar-coated and served with other sweets at the end of a meal, together with hippocras (spiced wine). Fennel seeds were also used in pies, and the leafy part as herb in for example a summer stew with fish. The stalks were prepared as a vegetable, and there are even recipes for fennel blossom. The white bulbous finocchio was developed in Italy in the seventeenth century. 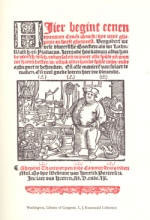 Vorselman was not a cook but a physician. He was born in Groot-Zundert, an area in the province of Brabant which is now divided by the border between the Netherlands and Belgium. The Nyeuwen cooc boeck was published in 1560, but Vorselman used many sources for his cookbook that date from much earlier. Sothis bread can be served without qualms at medieval meals. Among the texts Vorselman used are the Notabel boecxken van cokeryen from 1514 and the first volume of the convolute Gent KANTL 15 (around 1500). Vorselman also used French and Latin texts, mainly De honeste voluptate et valetudine (1468/1474) from Bartolomeo Sacchi (1421-1481), better known as Platina, an Italian humanist. The bread recipe on this page was one of the recipes Vorselman borrowed from Platina (DHVeV book I, recipe 15, ‘De Placentis’). He has omitted Platina’s mention of long buns made with leavened dough, and the variation in which the buns are filled with figpeckers and other small birds, or with fresh cheese.
The lard in the recipe is not melted, but chopped. I have used streaked bacon, chopped in small chunks and fried.
See also Roman bread. A modern recipe: Christmas Bread.

The pork fat mentioned by Vorselman (and Platina), is not melted lard, but diced bacon. I have chosen to fry these first, before adding to the dough. The buckwheat grits are my addition to the original recipe. I had them somewhere in a kitchen cupboard and used trhem to give the bread more ‘bite’. But feel free to leave them out if you do not agree with my adaptation.
For a large bread of 2 pounds; preparation in advance 2½ hours including rising time; preparation 45 minutes. 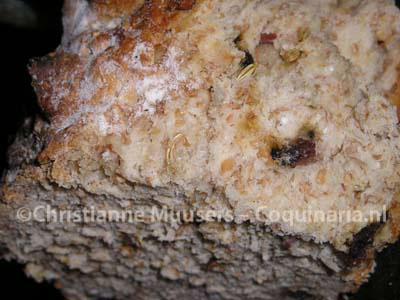 Fry the diced bacon on a small flame, drain them on kitchen towels..
When using fresh yeast, crumble it in a little warm water with a spoonful of flour and let it stand for fifteen minutes. Then add it to the flour with the rest of the water.
When using dry yeast, mix it with the flour together with the salt.

Mix salt, dry yeast if it is used, grits and fennel seeds through the flour and whole wheat flour. Stir the honey into the warm water and add it to the flour. When using fresh yeast, mix the water/flour/yeast through the rest of the water with the honey and add it to the flour. Knead until a nice supple but firm dough is formed. Put the dough in a large bowl and cover it with a moist cloth. Let the dough rise in a warm place for 45 minutes. Then add the fried bacon, knead again shortly, and let the dough rise for another 30 minutes.
Now give the bread the desired shape and let it rise another 30 minutes. Preheat the oven to 200 °C/390 °F to 220 °C/425 °F.

This bread is really hefty. You can serve it with medieval or renaissance meals, but it also tastes good at breakfeast or lunch. Or serve it with pea soup.

This is actually not a cereal, but a plant from the same family as rhubarb and sorrel. Buckwheat is native to the Far East, the temperate climate zone. Buckwheat has come to Europe by two ways: it first reached Europe by way of Russia; during the fifteenth century the plant was introduced in Germany. Later the plant reached Southern Europe through the Middle East (hence the French name for this plant: Sarassin). By the way, the English name buckwheat is derived from the Dutch boekweit, litt. ‘beech wheat’, because of its resemblance to beech nuts.
Since buckwheat contains no gluten, you can’t bake bread with just buckwheat. Famous dishes with buckwheat are blinis (Russian pancakes) and soba (Japanese noodles).
Because of the use of buckwheat grits this bread can only be served in an authentic way at meals from the fifteenth century and later. If you use rolled oats or something like that it can also be served at earlier meals.

Recipe for Medieval Bread with fennel and bacon
A recipe for bread from the 15th and 16th century, for medieval and renaissance meals.
© Author Christianne Muusers