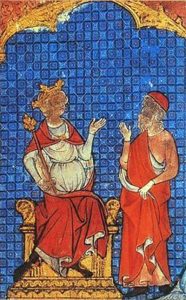 The recipe on this page was prepared, together with Arabian pasties, clareit and medieval wafers, for the opening of an exhibition in the Utrecht University Museum on the medieval text Sidrac. The focus was on the Middle Dutch translation, Sidrac. There is also a late-medieval translation of this text, Sidrak and Bokkus.

Why Arabian snacks for a medieval Dutch text? The Dutch version is a translation from the fourteenth century of the Oldfrench Sydrac le Philisophe which dates from the thirteenth century. It is a dialogue between King Bokkus and Sidrak the Wise who answers the king’s questions. Sources are, among others, scientific books presenting knowledge from antiquity returned through arab texts to medieval Europe. A new edition of the Middle Dutch Sidrac appeared in 2006.

The food I prepared on this occasion was to be eaten by people standing with a glass in their hands. That is why the modern adaptations of the recipes on this page deviate more from the original ones than usual on this site. There are three recipes: on this page spicy meatballs, and here small pasties, with two kinds of stuffing: aubergines or eggplants and spinach. The recipes for the meatballs and the pasties with eggplant are from the Anonymous Andalusian Cookery Book. More on this cookbook can be read at the recipe for deep-fried braids.

Among the listed ingredients for spicy meatballs there is a curious condiment, called Murrī. This is a seasoning that has dissappeared from the arab kitchen, it will have to be prepared at home, or replaced by miso or douchi as substitute. Murrī is a spicy, salty paste, made from quinces, spices, walnuts and lots of salt. To make Murrī at home: here is the recipe. The amount in the recipe will be ebough for quite a while: it keeps indefinitely, and only a teaspoonful at a time is needed.

The original Anonymous Andalusian Cookery Book is written in the Arab language. i have used the translation by Charles Perry (see bibliography).

A Dish of Meatballs
Make meatballs, as told before, and put the pot on the fire. Put in it a spoon of vinegar and another of murri, spices, an onion pounded with cilantro and salt, a little thyme, a clove of garlic and enough rue and fresh water as needed until it is nearly done. Throw in the meatballs and dot with egg yolks and coat the contents of the pot with the whites, and add whole pine nuts and almonds. Ladle out and sprinkle with pepper, cinnamon and rue.

The recipe starts with “Make meatballs, as told before”. From chapter 5 of the Anonymous Andalusian Cookbook, ‘Preparation of Meatballs from Any Meat You Wish’  I take it that all ingredients mentioned in the first part of the recipe are to be mixed with the ground meat, then the mixture is to be rolled into meatballs that can be either boiled or broiled. And then … It seems that the meatballs are to be glazed with eggyolks and then the eggwhites are to be poured over it seperately? Other recipes have instructions like “break eggs into it and cover it” (recipe for Jimliyya ch.5) or “cover the contents of the pot with an egg and pour it out” (recipe for Dish of meat with walnuts and mastic”, also ch.5). Because the meatballs were meant to be eaten at a reception (people standing around with a glass in one hand and a bite in the other)  I decided to omit the eggyolks and whites in the adaptation.
For 50 to 75 small balls; preparation in advance 10 minutes; preparation 20 minutes. 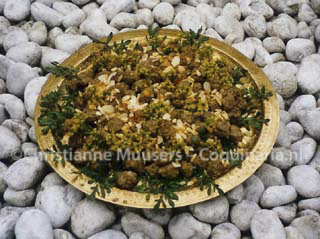 Mix everything for the meatballs. Form into small balls which can be eaten in one bite.

Heat the oil in a wide frying pan. Add the meatballs and brown them. Add chicken broth and murri, bring to the boil and temper the heat until the meatballs are done.

Sprinkle the meatballs just before serving with toasted pine nuts and almond slivers, and adorn with twigs of rue if you have them.
The balls are to be eaten at room temperature, or slightly warm, but not sizzling hot. That would not be comfortable when one is to eat them by hand.

A little shrub (Ruta graveolens), indigenous to Southern Europe. The odiferous plant has a strong, bitter taste. The ancient Greeks and Romans loved rue, and it is still an ingredient in the Italian drink Grappa Ruta. In modern cuisine rue has mostly dissappeared, which is a pity. A few rue leaves in broth are very good. However, it is thought to be an anaphrodisiac (quenches lust), and pregnant women must be careful not to use too much of it, because it could also be abortive. But a leaf or two won’t do any harm.
Rue plants can be found at garden centers. It is quite decorative, a semi-perennial with small yellow flowers that can be used to decorate any dish.