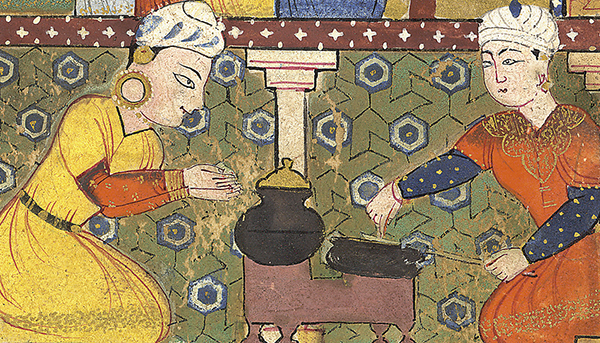 Just like the Arabian meatballs, these pasties were presented at the opening of the exhibition of Sidrac in 2006.

The idea to use these recipes for aubergine (egg plant) and spinach as stuffing for pasties is not authentic. But even in those days (thirteenth century) there were already small pasties, called sanbusaj, predecessors of samosas. In the Kitab al-Tabikh-al-Baghdadi these pasties are baked in sesame oil. The dough consisted of wheat flour with or without yeast. There is also a ‘flat bread’ which is stuffed with samosa stuffing. Starch or amylum is also mentioned in recipes, but you can’t make dough from starch alone (see Charles Perry (2)).
For the pasties I chose to use filo dough (or phyllo or fillo dough). This dough is not specifically mentioned in the arab cookbooks I saw, but is does seem to be fairly authentic for the period. From the eleventh century onward there is a Turkish bread consisting of layers, the direct ancestor of filo dough. It wasn’t until around 1500 that the dough sheets were rolled out or spread out until they were paper thin, although extremely thin sheets were mentioned before (a poet describes them as ‘grasshoppers’ wings’ Charles Perry (2)).

Description of Mahshi (a stuffed dish) With Eggplants
Take sweet eggplants, peel them and boil in salted water until done, then remove their seedy flesh to one side. Make mahmiyya for the eggplants in a tajine. Add as much bread crumbs [as the quantity of eggplant], and pepper, coriander seed, cinnamon, saffron, chopped almond and as many eggs as you need; beat it all and cover with plenty of oil and bury in it whole egg yolks. Then plant the seedy flesh in it and put in an oven at moderate heat and leave until it has finished cooking and binds and is brown on top, then take out and leave until its heat flags and leave it. You might pound in it whatever meats of fried fowl you have ready, and each will result in a different dish; there are some who serve it with juices of coriander and mint.
From the Anonymous Andalusian Cookbook chapter 7. (see bibliography).

Isfanakh Mutajjan (fried spinach)
Take spinach, cut off the lower roots, and wash: then boil lightly in salt and water, and dry. Refine sesame-oil, drop in the spinach, and stir until fragrant. Chop up a little garlic, and add. Sprinkle with fine-ground cumin, dry coriander and cinnamon: then remove.
From the Kitab al-Tabikh-al-Baghdadi (Medieval Arab Cookery p.79, see bibliography).

Filo dough is made with wheat flour, water, oil and salt. In commercially produced filo dough starch is also added. The starch makes the dough slightly transparent when it is baked. For these pasties I have been lazy and used filo dough bought from a shop.
When you buy filo dough it’s problaby frozen and has to thaw. Once you start to use it you must keep the dough in foil and/or a moist towel because it dries very quickly. 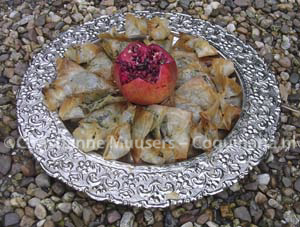 Spread one sheet of filo dough on your work top. Brush with olive or sesame oil. Olive oil was used in the west, sesame oil in the east of tha arab countries. I used sesame oil because I like the taste best in this dish. Cover the sheet with another sheet of dough, brush it with oil, and cover this sheet with a third sheet. Now, using a pizza-cutter, divide the sheets in squares of 5 by 5 centimeters (2 by 2 inches). Brush the edges of the squares again with oil, and place on every square a teaspoon of stuffing. Now you can make either triangles by simply folding the squares diagonally, or little square hats by taking the four points and pinch them together. If you use both stuffings, you could shape the pasties differently according to the stuffing, so people know what each pasty contains.
Put the pasties on an oiled baking tin and place this in the middle of a prehated oven for 25 minutes on 180 °C (350 °F). If you bake the pasties in advance, you’ll have to reheat them in the oven to make them crisp again: 5 minutes on 200 °C (400 °F). You can not heat them in the microwave, that won’t make them crisp.

You can serve these pasties warm or at room temperature. The pomegranate in the picture was meant as decoration, but it was a very good idea to dip the pasties into the slightly sour juice. Yoghurt with mint would also have been a good idea.

Warning: This adaptation is VERY adapted! Only the ingredients from the original recipe are the same. As you can read in the origal recipe the aubergine is peeled and boiled in salted water, the other ingredients are mixed seperatedly, and then the aubergine is added together with whole, hardboiled egg yolks. Oil is poured over this, then the whole goes in the oven in a tagine until it has formed a brown crust (see the note of Perry for this recipe). I have omitted the boiled yolks, roasted the aubergine instead of cooking it, and mixed everything to obtain a stuffing for pasties.
(For 20 to 40 pasties) 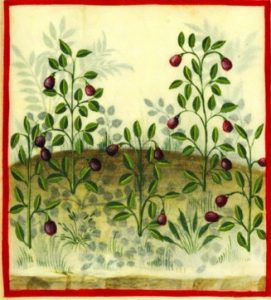 Mash the aubergine flesh to a pulp, using a blender or fork. Add the other ingredients, mix well. Use this as stuffing for the pasties (see above).

The adaptation of this recipe has remained close to the original (except for the use of the spinach as stuffing).
(For 20 to 40 pasties)

Heat sesame oil in a low, wide pan. Lower the fire, add the chopped garlic, and after a few moments the spices. Mix, and immediately add the spinach. Stirfry until everything is mixed well.

When using the spinach for pasties let the spinach cool to room temperature before stuffing. You can add a raw egg yolk to the spinach, but this is not essential. This stir-fried spinach can also be served as a side course or vegetable, as is the original intention of the medieval recipe.