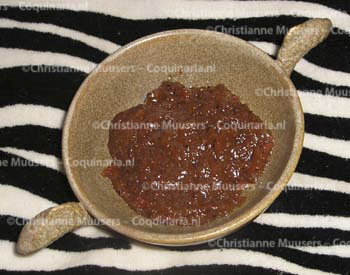 An Arabian condiment from the Middle Ages

Who  prepares medieval Arab recipes on a regular basis, will have read about murrī, because this condiment is frequently used in period recipes. The ancient Romans had garum, the medieval Arabs had their murrī. This sauce can best be described as a fragrant, spicy way of salting food. There are several recipes from the thirteenth century, but two hundred years later it appears that murrī has vanished from the Arabian kitchen.

Murrī is often compared to soy sauce. The advise is to use cheap soy sauce which is made with wheat flour as a modern alternative. The murrī I made reminded me not only of thick soy sauce, but also of tao-tjo or doucho (an Indonesian condiment made with fermented soy beans, salt, soy sauce, water) or Japanese miso.
There are two recipes on this site that use murri, Spicy meatballs and Stir-fried Lamb. 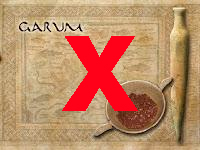 Last year I discovered that, because I mention somewhere that Roman garum is used in much the same way as murrī, many mainly Spanish-speaking people mistook the picture of murrī for garum. And they all shared this picture on the internet in articles about garum. So now a lot of people have an absolutely false idea of what Roman garum should look like.

The adapted recipe on this page is not from me, but from David Friedman who used the recipe for ‘instant murri’ given by Charles Perry in his translation of The Description of Familiar Foods (Kitab Wasf al-At’ima al-Mu’tada, editie). There are also recipes for real murri based on barley in the same cookbook that are rather complicated to make, including a fermentation of several months.
The recipe on this page for Byzantine murri results in a dark, fragrant paste with a peculiar taste. Strange, but not disagreeable. It is very salty, so use it sparingly.

The text for Byzantine murri, as found in Medieval Arab Cookery (pp.406/407).

Recipe of Byzantine Murri right away. Take, upon the name of God, the Most High, three pounds of honey scorched in a kettle [nuqra]; 10 loaves of bread scorched in the brick oven and poundedn; half a pound of starch; two ounces each of roasted anise, fennel and nigella; an ounce of Byzantine saffron; cellery seed, an ounce; half a pound of Syrian carob; 50 peeled walnuts; half a pound of syrup; five split quinces; half a makkûk of salt dissolved in honey; and 30 [viz. 100] pounds of water. Throw the rest of the ingredients on it [viz. on the water], and boil it on a slow flame until a third of the water goes away. Then strain it well in a clean, tightly woven nosebag of hair. Put it up in a greased glass or earthenware vessel with a narrow top. Throw a little lemon from Takranja on it. If it suits that a little water be thrown on the dough and that it be brought to the boil and strained, it would be a second [infusion]. The weights and measurements of the ingredients are given in pounds and weights Antiochian and zahiri [as] in Mayyafarqin.

Modern adaptation of this recipe according to David Friedman

The amount is for 2 small glass jars; preparation 60 minutes. 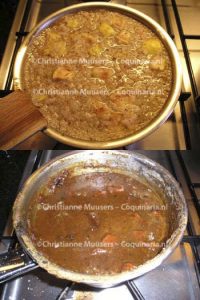 Bring the honey to the boil in a pan with a thick bottom. Turn off the heat, then bring the honey back to the boil again. Repeat this several times. The honey will turn darker and caramellize. Ground the seeds and walnuts in a blender or mortar.
Add everything except the lemon juice to the honey in the pan. Bring once more to the boil, then lower the heat and let this simmer without a cover until about a quarter of the volume has evaporized (= a third of the water, but remember that there are more ingredients).
Now you’ve got a thick paste. Friedman is absolutely right to propose using a potato ricer to squeeze the liquid out of it, because sieving through a cloth won’t work with this paste. Add the lemon juice to the squeezed liquid, wich will thicken to a jelly when it has cooled because of the carob and the quince.

This murrī will keep for a very long time in the refrigerator.

The recipe suggests that you can make a second infusion when you add water to the remaining paste, but I wasn’t overwhelmed by the results of that.

An evergreen tree (Ceratonia siliqua) that is indigenous to the eastern Mediterranean. The fresh pods contain a sweet gum that was used by the ancient Greek to make candy. The ground seeds are used in the food industry as thickening agent. I’m not sure whether pods or seeds are used in the recipe, but because the amount is the same as the used starch I have chosen seeds. I could not get fresh pods or fresh or dried whole seeds in the Netherlands, so I bought dried pods and used the seeds from those. If you want to know what the tree looks like, click here.

Looks like a giant garlic press. It is used to make very fluffy mashed potatoes. If you don’t have one, use a food mill, or a strainer with coarse openings.