This is not the first recipe for mustard on Coquinaria. The first mustard-recipe, from the fourteenth-century cookbook Le Ménagier de Paris, was published fifteen years ago. Mustard in the Middle Ages and Early Modern Times is comparable to tomato ketchup or soy sauce in some restaurants: there is a bottle on every table, and it can be poured over practically everything.

The recipe from this page is from the Nyeuwen Coockboeck (‘New cookbook’, 1560) from the Antwerp physician Gheeraert Vorselman. The mustard is called Roman, but that has nothing to do with ancient Romans or the catholic church. Vorselman ‘borrowed’ this recipe from a Latin book, De honeste voluptate et valetudine that was written by Platina, a fifteenth-century Italian humanist and librarian in the Vatican. So, with ‘rooms’ or ‘roman’ Vorselman simply means ‘from Rome’, or Italian. By the way, Platina had borrowed this recipe too, from the Italian cookbook by Martino de Rossi.

It is interesting to see how the recipe changes a little in every new version, indicating a declining practical culinary expertise in the subsequent authors.

Martino de Rossi describes how the mustard seeds must be brayed separately, and the raisins too; after that, the ingredients are put together and pounded into a paste. Platina offers a choice: pound everything separately or together. Vorselman finally, only writes that all ingredients must be brayed or ground together (“tesamen”).

Because mustard seeds are much harder that the other ingredients, they will not be crushed when they are brayed together with  the soft, sticky raisins. The result will be much better if the seeds are ground first. Of course, nowadays it is easiest to just buy mustard meal and use a blender. That will save a lot of work.

These are the recipes from Vorselman, Platina and Martino, in that order. See the bibliography for the editions.

For once I have used only the mortar and pestle to prepare a medieval recipe, except for the sandalwood which I only have as powder. Use a mortar that is deep enough, to prevent the ingredients jumping out while pounding them. For the mustard seed I used a low but wide mortar with a flat pestle. This way the seeds are ground rather than pounded.
Condiment, about 300 gram; preparation in advance 5 minutes; preparation 30 minutes. 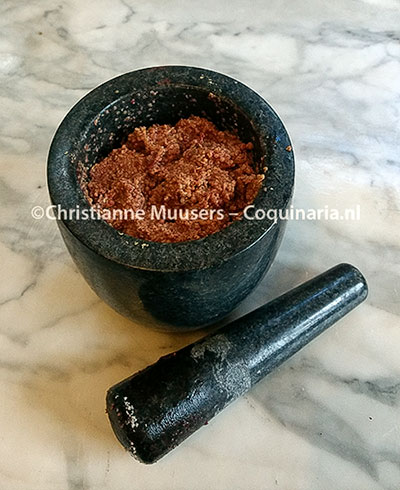 Roast one slice of white bread very light. Then remove the crust and grind in the blender. Or use crumbled rusk. 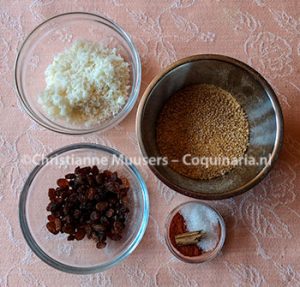 Grind mustard seeds and raisins separately in mortars. Using mustard powder will result in a smoother mustard. Do not grind everything in one go, but in small amounts. Break the cinnamon stick in small pieces and also grind separately.

Mix this with mustard seeds, raisins, bread crumbs and sandalwood, and grind to a paste, adding enough vinegar and water to obtain a rather thick condiment. If the mustard is to be kept for a while, add a little more water because the mustard will thicken more. Keep the mustard in a sterilized glass jar until further use.

Mustard was served with practically everything in the Middle Ages. So just place a dish filled with mustard on the table when serving a meal with medieval or sixteenth-century dishes.

This is fermenting grape juice. When ripe grapes are pressed, the juice will ferment (through natural or added yeast). Must can’t be kept in a closed container, the gasses must be able to escape. When the first, hefty yeasting is over the must will ripen into young wine. Must is only available just after the grapes are pressed after the harvest, for a short period. I once drank it in October in Wallis (the wine province of Switzerland). It was frizzy and refreshing in taste.

White mustard seeds (Sinapis alba) are easier to find in the shops than black ones (Brassica nigra). White seeds are also softer, and can be crushed more easily. There is a difference in taste: white seeds are spicy, black seeds are really hot. In the Middle Ages both kinds of seeds were used to make mustard. Because Brassica nigra is difficult to harvest by machines, it is less and less cultivated nowadays. The Asian Brassica juncea has replaced black mustard seeds in the production of dark mustard.

Yes, it is wood! Red (from Pterocarpus santolina) and yellow or white (both from Santalum freycinetianum) wood dust from fragrant sandal trees were used as food colouring in medieval and early modern Europe. Before tomatoes and red bell peppers were introduced in the European kitchens, it was difficult to give your dishes a red colour, so red sandalwood was used especially. You can buy it as wood chips, but for colouring you need the fine, deep red powdered wood. Sandalwood is also used in scents and incense.

Recipe for Red Mustard
The recipe for this red-coloured mustard can be found in Italian cookbooks from the 15th century, but also in a 16th-century Dutch cookbook.
© Author Christianne Muusers