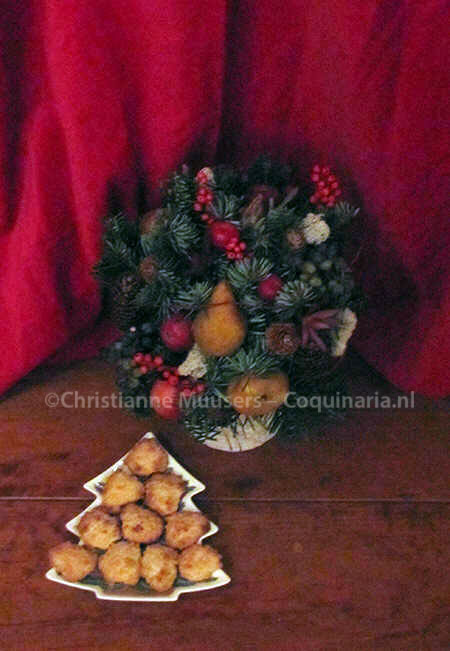 For Victorian trifle, but also excellent with tea or coffee

Mrs Beeton uses two kinds of cookies with almonds in her recipe for trifle: macaroons and ratafias. Macaroons only contain sweet almonds, ratafia also contain a portion of bitter almonds. She provides recipes to make these at home in her Book of household management (recipes 1744 and 1745, on p.851 from the 1861 edition), however, she adds that one just as well buy these at a good confectioner’s. Mrs Beeton’s recipe for ratafia contains a much too high percentage of bitter almonds (66% sweet almonds and 33 % bitter almonds). So, when using modern ready bought ratafia, or making the adapted version on this page, it is not necessary to use macaroons as well as ratafia when making trifle. And for this recipe it is better to use French type macarons rather than Italian type amaretti which are too hard.

Some ratafia are not made with almonds at all, but with apricot kernels. Those are cheaper than almonds. However, since there are recipes from the eighteenth and nineteenth centuries for ratafia from apricot kernels, these ‘cheap’ ratafia can also be used for trifle.

Nowadays almonds can be bought blanched and peeled, and even ground almonds are available. Using those will save a lot of time.

Ratafia
1745. Ingredients — 1/2 lb. of sweet almonds, 1/4 lb. of bitter ones, 3/4 lb. of sifted loaf sugar, the whites of 4 eggs.
Mode. — Blanch, skin and dry the almonds, and pound them in a mortar with the white of an egg; stir in the sugar, and gradually add the remaining whites of eggs, taking care that they are very thoroughly whisked. Drop the mixture through a small biscuit-syringe on to cartridge paper, and bake the cakes from 10 to 12 minutes in a rather quicker oven than for macaroons. A very small quantity should be dropped on the paper to form one cake, as, when baked, the ratafias should be about the size of a large button.
Time. — 10 to 12 minutes. Average cost, 1s. 8d. per lb.

When I prepared trifle for Christmas 20154, I decided to try my hand at Mrs Beeton’s ratafia. I changed the ratio of sweet and bitter almonds from 2:1 (Mrs Beeton) to 13:1. If bitter almonds are unavailable, add 2 tablespoons almound flour to the recipe and some drops of essence of bitter almonds.
For 80 to 90 ratafia (about 700 gram or 1½ pound); preparation in advance 10 minutes; preparation 15 minutes for one round of baking.

Beat the egg whites with a pinch of salt into peaks.
Crush the bitter almonds in a mortar or nut mill with a half egg white (the almonds will otherwise become a paste due to their high fat content).
Temper almond flour, bitter almonds or almond essence woth icing sugar.
Add this to the beaten egg whites and mix well.

Preheat the oven to 170 °C/ 340 °F (circulation oven 160 °C/320 °F).
Cover an ven tray with a sheet of baking paper. Scoop smaal heaps of the cookie dough on the tray using two teaspoons, keep some space between them. In my oven I could 25 cookies on one tray. When using edible wafer paper, this can be cut to size after baking.
Bake the cookies ten to twelve minutes a little above the centre of the oven. Then take them out. The cookies are still very soft. Gently move them onto a cake rack, using a flat spatula, and let them cool. The cookies will firm up on the outside during the cooling process. I like it when they are still a little moist on the inside.

These cookies are excellent with tea or coffiee, but can also be used for bavarois with ratafia, custard with ratafia, or in trifle.

In oldfashioned detective novels, before everything was solved with computers, the hero would kneel over the body and announce that there was an almond smell. The cause of death was clear: poisoning with cyanide. And indeed, bitter almonds contain cyanide, and it is not healthy to consume unprocessed bitter almonds. But they do contain just that acerbic taste that saves good marzipan from dull sweetness. If you make marzipan that will be eaten in large quantities, like the marzipan figurines that are so popular in The Netherlands at the Saint Nicholas Feast, it is best to use almond essence. If you just cover your christmas cake with a thin layer of marzipan, it won’t hurt to use a bitter almond or two in a pound of sweet almonds. Bitter almonds can be bought easily in Europe, but in the US they are a banned substance (while weapons are freely available, isn’t that strange?).

The recipe for ratafia from Mrs Beeton
© Author Christianne Muusers