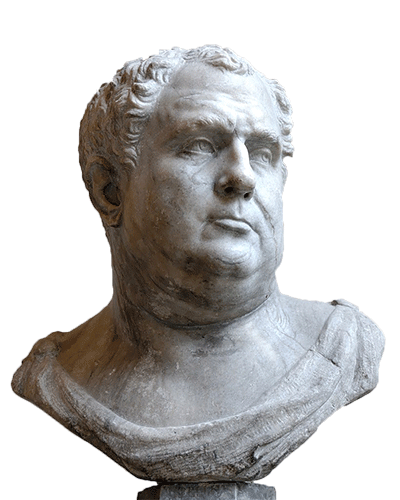 A Roman recipe with broad beans

Prior to the transatlantic migration of the American Phaseolus-family (amongst them kidney beans and French beans), the only beans known to the ancient world were broad beans (BE) or fava beans (AE). Of course there were other legumes, like peas, chick peas and lentils, but these aren’t called beans. The broad bean (Vicia faba or Faba vulgaris) has been on the menu since prehistoric times. In modern times broad beans are grown in kitchen gardens or allotment gardens (people sometimes still have traumatic memories of mountains of broad bean pods they had to help shell when they were children). In the Netherlands broad beans were often preserved in glass jars, in Africa or the Middle East the beans are preserved by drying. And just as one can buy peas whole with skin, and without skin as split peas, one can buy whole dried broad beans with skin, and without skin like ‘split beans’. These are not green, but yellow. However, the recipe on this page is meant for fresh broad beans, just as the 16th-century recipe from Scappi.

The collection of Roman recipes De re coquinaria (Apicius, see bibliography) has two recipes for broad beans or peas à la Vitellius. Aulus Vitellius (15-69 AD) was emperor of Rome for just three months, the third emperor within a year during a civil war. His successor Vespasianus ended the war and he reigned until his death in 79 AD. Vitellius has been described by contemporary historians like Suetonius and Tacitus as a gluttonous, perverse brute, but these writers were not without bias and certainly not on the hand of Vitellius. He does however seem to have liked his food, enough to have several recipes named after him. The recipes for broad beans can be found in the Fifth Book of De re coquinaria (Ospreon Liber Quintus), which contains nourishing dishes with legumes. The first recipe for pisam Vitellianam siue fabam is a purée of peas or broad beans, seasoned with pepper, lovage and ginger, hard boiled egg yolks, honey, wine and vinegar. The other recipe, which is reproduced below, is prepared with whole peas or broad beans. I surmise that the first recipe is with dried legumes in winter, the second with fresh legumes in summer. There is another recipe in De re coquinaria that is named after the emperor; in Book Eight, recipes with quadrupeds, you can find porcellum Vitellianum: roast sucking pig with a sauce made from pepper, lovage, liquamen, wine and passum.

The ancient broad bean had quite a reputation. The Egyptians considered broad beans unclean, and according to Herodotus, their priests weren’t allowed to even look at them, let alone eat the beans (fish was also taboo for the priests – HistoriaeII.37, see bibliography p.110). The Greek philosopher/mathematician Pythagoras (570-495 vC) was also very anti-broad beans.

Romans thought the beans could house souls of the dead. During the Lemuria or Lemuralia, in the nights of 9, 11 and 13 May, the pater familias had to get up at midnight, and walk around the house barefoot, throwing nine black beans whilst speaking the words “Haec ego mitto. His redimo meque meosque fabis” (These I throw. With these beans I redeem me and mine). The spirits would settle in the beans and these disappeared mysteriously. A nice scene for the tv-serial Supernatural. The custom is said to be as old as the foundation of the city of Rome: Romulus tried to appease the spirit of Remus, the brother he had murdered (Ovid, Fasti vss 473 ff – English translation). In 609 or 610 AD the last day of the Lemuria (13 May) was christianized by pope Boniface IV, to make it the feast of Allsaints. A century later, in 739, All Saints was shifted to coincide with the celtic Samhain at 1 November by pope Gergory III. 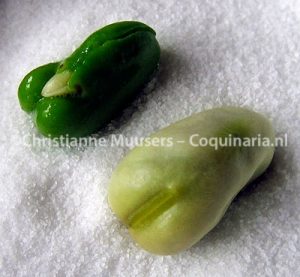 The Dutchman Faas mentions in Around the Table of the Romans (see bibliography) another interesting fact: the broad bean was considered sacred, because the unskinned bean has a slit that reminds one of female labia. But when you remove the gray skin, the bean appears to have a little penis with two testicles. This was so amazing, that it had to have a higher meaning. Faas does not mention any source, but it probably was Aristotle, in a lost work on the Pythagoreans, that was quoted by third century biographer of Greek philosophers Diogenes Laërtius. There is lots more to tell about broad beans in ancient and more modern times (Jake and the bean stalk), but then this page would become even more overcrowded than it already is. Anyway, however sacred the bean was, the Romans had recipes for it.

According to some, the superstition around broad beans was caused by some of their properties. Some people with G6PD-deficiency will suffer from hemolityc anemia and jaundice when eating broad beans (this special variant is called favism). Eating raw broad beans is not wise, unless they are really young. Foodreference explains why: all beans, but especially red kidney beans, contain a toxic agent called Phytohaemagglutinin. Broad beans contain only 5 to 10% as much of this toxic, but still it is better to cook your beans before eating them. Another issue is that the consumption of broad beans will lessen the effect of antidepressant drugs (MAO-inhibitors). On the other hand, broad beans are rich in L-dopa, which is used in the clinical treatment of Parkinson’s disease.
Finally: as with all beans, the consumption of broad beans causes flatulence.

From De re coquinaria – Apicius (edition p.212/213, recipe 5.3.9, see bibliography). This is not the first recipe on this site from the Roman cookbook. See the pages on Roman mussels, Omelette with quails and asparagus, Roman apricots and Roman broccoli. The English translation of the recipe is from the edition by Grocock and Grainger.

Are the recipes in De re coquinaria meant for fresh or dried peas and broad beans? Faas (Around the Table of the Romans, see bibliography) preferred dried, skinned broad beans, Gozzini (A taste of Ancient Rome, see bibliography) fresh beans. The skimming of the cooking liquid would indicate dried beans, but since this recipe is published in May, I have chosen fresh beans. The beans can be used with skin or skinned. Frozen broad beans are also good, you can even double-pod them when they are thawed.
Two kinds of olive oil are used in this recipe. To fry the herbs, use ordinary olive oil, to finish, take extra virgin oil. It would be a pity to heat virgin oil, as taste and smell will deteriorate.
For 4 persons as side dish, for 2 persons as vegetarian main dish (use salt instead of garum), with cheese and some bread; preparation in advance 20 minutes; preparation 15 minutes. 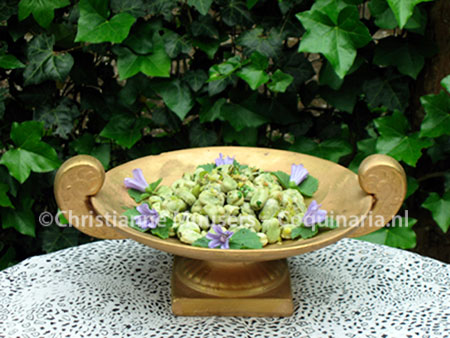 Shell the broad beans, discard the pods. Optionally, skin or double pod the beans.
Slice the white of the leek into ringlets, chop cilantro, lovage and mallow flower leaves.

Scoop the beans onto a preheated dish, pour extra virgin olive oil over them. Decorate with fresh mallow flowers and leaves. Serve as side dish, or with fresh goat cheese as vegetarian main dish.

Roman fish sauce, was used instead of salt. Can not be substituted with salt, but Thai or Vietnamese fish sauce are good alternatives. It’s easy to make your own simple Roman Fish sauce. 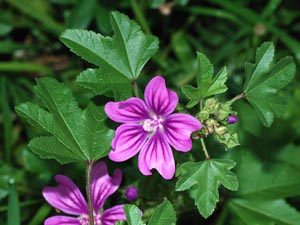 Malva sylvestris is a perennial that was used by Greeks and Romans as kitchen herb, vegetable and medicine. The leaves were eaten as salad or boiled like spinach, and used as garnish (like we use lettuce). Several parts of the plant have medicinal use, for treatment of wounds or coughs, and to help labour. According to Pliny the Elder common mallow was good for ‘anything’: “si quis cotidie suci ex qualibet earum sorbeat cyathum dimidium, omnibus morbis cariturum” – if anyone takes a half spoonful juice of one of these [kinds of mallow], he will be free from all diseases, Naturalis Historiae Liber XX, 224). That is why mallow is also known as omnimorbium. Moreover, it is quite a decorative plant for the garden, what more could one wish for?