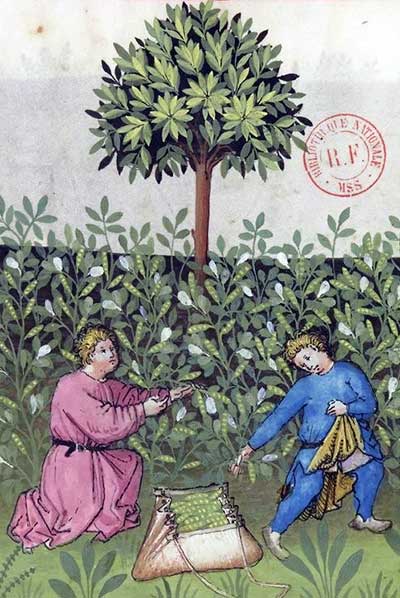 This recipe for broad beans is taken from the sixteenth-century cookbook Opera by Italian Bartolomeo Scappi (see bibliography). more on Scappi and his book: Tortelli in brodo and Broccoli in de Opera). In the Libro Terzo (Book III, with recipes for Lent and fish days) of this cookbook is the following recipe for minestre (a first course, thick soup or pottage) with fresh peas, broad beans, chick peas or Phaseolus beans. Whatever legume, as long as they are fresh, and not dried. (Mind: Phaseolus beans are the American beans – Lima beans, haricot beans – already on the menu in Europe by then). In Italy you can find fresh broad beans from March onward. Where I live, in the Netherlands, fresh broad beans aren’t available until the end of May, too late for Lent (see this article with recipes for Good Friday) so we’ll have to prepare them on one of the weekly fish days (Friday, Wednessday, and/or Tuesday and Saturday, depending on century and location).

Of course, Scappi also privides us with a version for meat-days (Libro Secundo). In this version the beans or peas are cooked in fat broth with sliced pork jowl, and brought to taste with anise and parsley. Here, the puréing of part of the beans is optional, but then you also add pepper and cinamon. And if you want a richer dish, add stuffed goat-kid heads, young cockerels, doves, young goslings and ducklings. The recipe starts with the season of fresh peas and broad beans: “which in Rome goes from the end of March throughout June” (edition p.234).

A Roman recipe with broad beans.

Since a part of the beans will be puréed in this recipe, they have to be double-podded. Otherwise you’ll spend a lot of time fishing the tough grey skins out of your purée. From 1 kilo (8 cups or little less than 1 dry quart) bean pods you get about 330 gram (3 cups) shelled broad beans. If you double-pod these beans, you’re left with about 220 gram (2 cups). The minestre is nourishing and very broad-beany tasting. If you want a deeper flavour, use good chicken stock instead of water. This adaptation is for broad beans, but you can prepare the dish with any kind of bean (or pea). Just as long as these are fresh, not dried. On the picture below the dish is garnished with some violets, completely random.
First course or side dish for 4 to 6 persons (because very filling); preparation in advance  20 minutes; preparation 15 minutes. 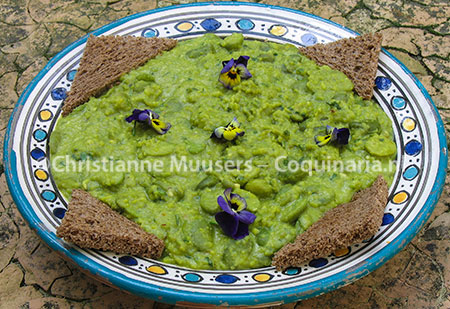 Shell the broad beans and double-pod or skin them.
Chop the herbs without stalks. The recipe mentions herbuccie battute, which would indicate pounded herbs, more like a purée.
Crush the saffron in one tablespoon hot water, to release the colour.

Heat the olive oil in a thick-bottomed skillet. Temper the heat, add broad beans, pepper and salt, and stir to cover the beans with oil. Now add saffron water and the rest of the boiling water. Cover, and let simmer at low heat for five minutes. Drain the beans, but save the cooking liquid. Purée half the beans in a blender with the cooking liquid to a thick consistency. Return to the pan with the remaing whole broad beans and herbs. Heat through gently until it almost boils, keep stirring to prevent burning. Then serve.

As a warm first course in early summer. This dish can be served in a modern menu, it will be fun to tell guests afterwards that the recipe is nearly 500 years old. Serve with toasted wholegrain bread.

A recipe for 16th-century purée of broad beans
Broad beans were already eaten in Europe during Antiquity, and often they were dried and had to be soaked before preparing. This recipe is for fresh broad beans that are double-podded.
© Author Christianne Muusers