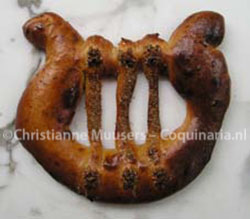 The Romans knew several kinds of bread. Mostly these breads were made with sourdough. The meal that was used was wheat, spelt, barley or rice. Even ground pulses were used. In the second century before Christ bread started to displace pulses as basic food. Bread was eaten every day, at every meal. This explains the “bread and circuses”: both were considered essential to the well-being of the plebs.

The bread in this recipe is not authentic. I have composed this bread from the description by Faas of several Roman breads (Around the table of the Romans: Food and feasting in ancient Rome, see bibliography). So this is not an actual historical recipe, but an ‘impressionistic’ one. It tastes great with the Roman Mussels. 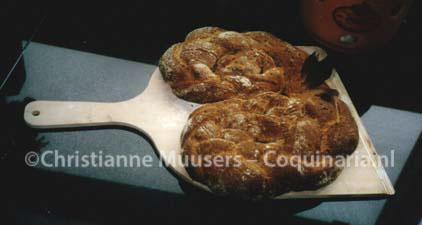 Temper the sourdough with ¾ cup of the grape juice, 100 gram spelt flour and honey. This is the sponge. Let this stand for at least one to three hours on a warm spot until it has doubled in volume, then mix in the other ingredients. Knead well until an elastic dough is formed. Let it rise on a warm spot under a damp cloth. When using extra yeast, one or two hours will suffice, but when sourdough is the only rising-agent, the dough can also be left to rise for an entire night. When the temperature goes down, rising will be slower. To prevent the dough from drying out, place it in a plastic box with lid, together with some glasses of hot water. One can knead and let rise for a third time, but this is not mandatory.

Form a bread in any shape that strikes your fancy. Or make a simple loaf.
Once the bread is shaped, let is again rise, this time for half an hour. Preheat the oven to 220 °C/425 °F. Bake the bread for 20 to 25 minutes.

What is it. Sourdough is a mixture of lukewarm water and flour (wheat or rye), in which ‘wild’ yeast cultures grow (single-celled micro-organisms that belong to fungi – the other groups being moulds and mushrooms). The mixture (water to flour 1:1 to 2:1) must stand for a couple of days at room temperature. The yeast cells in the mixture will multiply and cause the caracteristic sour smell. These days often ‘tame’ yeast is also added to the breaddough to help the rising along.
How to make your own sourdough. When you want to make your own dough you have a small problem: how do you catch wild yeast?
You can set the flour/water mixture someplace and hope for a satisfying result. One is dependent on what is in the air. Sometimes you get lucky and a great sourdough is the result, sometimes you get something rather unsavoury, and sometimes nothing happens. Start with 100 gram whole wheat flour and 1 to 2 decilitre lukewarm water. Let it stand at room temperature for a couple of days, covered with a damp cloth. Stir well twice a day. When you have caught the right yeast, the mixture will start to smell sour. After three days add 1 tablespoon flour and 1 tablespoon water, repeat this the next day. In less then a week you have a sourdough ready to bake bread with. When you want to, you can add a teaspoon of honey or sugar.
How to get ready made sourdough. When you want to be on the safe side you can ask a gift of sourdough from a friend that has a good one, or buy a sourdough starter and follow the directions on the package. If you can’t find any in the stores in your neighbourhood, you could try online.
How to keep your sourdough. Once you have satisfying sourdough you have to take care of it. Keep the sourdough starter in the refrigerator in a closed container. Some advice to punch some holes in the cover, but you then risk a rather smelly refrigerator. At least once a week (twice is better) you have to air the sourdough: let it stand, covered with a damp cloth, at roomtemperature for 24 hours. When you look at your sourdough you will see that it has seperated in sediment at the bottom and a grey-brown fluid on top. Stir this well. You will have to feed your pets: after stirring, add equal measures of lukewarm water and flour. Take some of the sourdough out to bake a bread with, or to give away.
How to bake sourdough bread. For 500 gram flour (whole wheat, optionally mixed with rye, oats, millet) use 100 gram sourdough and 3,5 to 4 decilitre water (start with 3,5 decilitre, add more water only if the dough needs it). The recipe for Roman bread has different proportions. You also have the right to experiment!

This grain (Hordeum, al kinds of varieties) comes from Asia, but because it is very versatile and low maintenance, it can be grown anywhere. Barley may be the oldest cultivated grain. In the Netherlands it serves mainly as fodder, but is also the main ingredient for a popular drink: beer. The grain has ears with long awns.

Rice is associated primarily with Asian cuisine. The grain is indeed indigenous to Asia, but was introduced in Europe as early as 327 BC by Alexander the Great. However, it remained a curiosity for a long time. Exactly one recipe with rice can be found in the Roman cookbook De Re Coquinaria, pounded as thickener for a sauce for meat balls. It wasn’t until the conquest of the Iberic paeninsula by the Moors in 711 AD that rice was introduced as a crop. It would take another seven centuries before rice was grown in Italy, in the Po Valley. In Spain as well as Italy both short and middle long grain rice was grown.

Spelt is a grain. This grain flourishes best on poor ground, with no pesticides. That is why less and less spelt is being cultivated since the beginning of the twentieth century. It is an uneconomical crop. Apicius names spelt several times in his recipes. You can buy spelt flour (at least in the Netherlands) in organic foodshops, but in the 16 years this recipe has been online, spelt has become more popular and is now easily available in supermarkets.

Fresh (pressed) yeast must be crumbled and mixed in some lukewarm water with a spoonful of flour. After fifteen minutes you add it to the bread dough or sponge. Dried yest is mixed into the dry flour.

There is a very interesting website on Roman ovens, especially the page on how to build an oven as was used in Pompei.