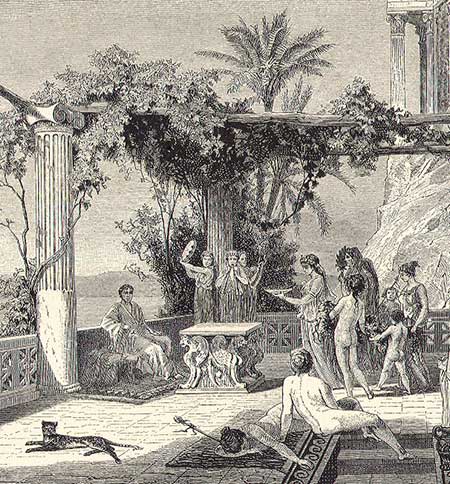 Pliny the Elder (23 – 79 AD) describes in his encyclopedia Naturalis historia everything that live and exists on Earth. Originally there were 102 volumes, but unfortunately only 37 have survived. These 37 volumes include the ones on animals and plants, so we can still read what Pliny had to say about cucumbers and melons. He tells us for example about the emperor Tiberius (42 BC – 37 AD) who wanted to eat cucumbers all year round. In order to make that possible, raised beds on wheels were made, that could constantly be moved to the sunniest spot in the garden. During winter the beds were covered with a lattice clad with muscovite. During summer, cucumber plants could also be used to cover pergolas and rooftops by climbing them. The fruits would be hanging down.

On the picture Tiberius is enjoying his stay in the Villa Jovis on Capri (Cassel’s Illustrated Universal History, 1882). In this case, the plant covering the pergola is a grapevine.

What kind of cucumbers?

Our cucumbers (Cucumis sativus) were probably already known to the ancient Romans, although according to Andrew Dalby (see bibliography) there is no archaeobotanical or written proof of this. The soft seeds are so perishable that none have survived, and in those days Greeks and Romans made no distinction between cucumbers and a variety of the musk melon, Cucumis melo var. chate, that is still known as the ‘Italian cucumber’. This type of melon does indeed taste like cucumber, except without the bitter taste that was inherent in cucumbers of old. This bitter taste is caused by a toxic biochemical called cucurbitacin C, but nowadays you will not run across these bitter cucumbers unless you cultivate them yourself. Do be careful in that case, as cucurbitacine can be deadly when consumed in high doses (approximately 300 mg). There’s no reason to panic, however, as there is no cucurbitacine in supermarket cucumbers or the melon cucumber variety. In the Netherlands, it is possible to order melon cucumber seeds at Vreeken’s Zaden in Dordrecht, where they have several different kinds in stock.

I first heard about Pliny the Elder in high school. We had to translate the eye-witness account of his nephew Pliny the Younger (61 – 113) of the eruption of the vulcano Mount Vesuvius in 79 AD from Latin. Among other things, he describes his uncle’s death as a result of the volcano’s eruption at the coast of Stabiae, near Pompeii.

The ‘original recipe’ is acually just a remark at the end of the chapter with ’11 remedies with different types of melons. Naturalis historiae, book 20, chapter 6. Latin text is taken from the edition of Mayhoff (see bibliography).

I have changed nothing in the recipe]. No herbs were added, no garum. Whether the dish is prepared with ordinary cucumbers, snake cucumbers or the ‘Italian cucumber’ is up to you. It may seem strange to eat warm cucumber, but try it. It does not taste bad.
For 2 to 3 persons as side dish; preparation in advance 25 minutes; preparation 5 minutes. 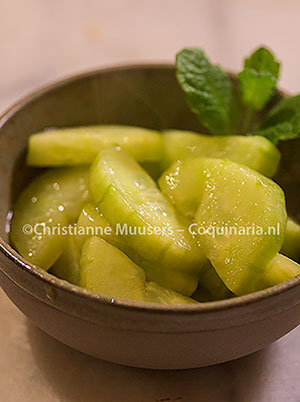 Peel the cucumber, cut slices of 1 cm (⅓ inch), and cut those in half. Sprinkle with salt and leave for twenty minutes in a colander. Gently squeeze excess liquid from the cucumber slices.

Heat oil, vinegar and honey in a pan. Add the cucumber slices and stir fir about three minutes.

Serve warm as a side dish with for example grilled tuna.
If you are interested in a recipe for an eighteenth-century cucumber salad, that can be found here. 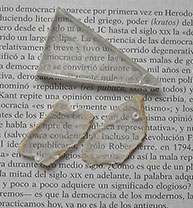 The Romans called this mineral Lapis specularis. It is as transparent as glass, as you can see in the picture. The best muscovite was found in Spain. The plates were used as window panes until glass windows became more available. The modern name is is muscovite (from vitrum muscovitum, glass from Moscow). In the nineteenth century muscovite was used in oven doors because of its heat resistance.