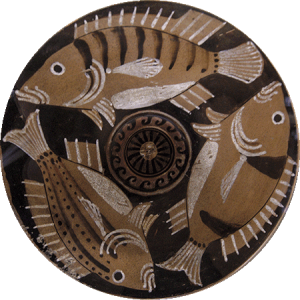 Every year around the first day of May there is a Romeinenweek or ‘Week of the Romans’ in the Netherlands, when Roman heritage is put in the spotlight with festivals, events and activities. This year I was there on April 29 at a recently discovered Roman army marching camp near Ermelo where I gave a short talk on Roman food. Another way I contribute to the Week of the Romans is by publishing some Roman recipes on Coquinaria, like this one. There is a recipe for fish from the ninth book of De re coquinaria, called Talassa or ‘the sea’. The first chapter in Talassa concerns recipes for spiny lobster, electric ray, squid, cuttlefish and octopus, oysters, a sauce for all kinds of shellfish, sea-urchins, mussels, a chapter on bonito, baby tuna and mullet. The book concludes with a recipe not FOR, but FROM oysters, mussels and sea-urchins. For more Roman recipes on shellfish, please have a look at these three recipes.
More on fish plates like the one in the picture on wikipedia.

The recipe on this page is probably meant to be made with bonito (Sarda sarda, related to mackerel). There is another fish that goes by the same name, the ‘real bonito’ or skipjack tuna (Katsuwonus pelamis). Both varieties live in the Mediterranean. According to Andrew Dalby (see bibliography), the fishermen, cooks and authors did not always distinguish between the different kinds of tuna during Antiquity. Often it was the size of the fish that determined its name.

The ‘sarda’ in the Latin text is definitely not a large sardine (related to herring). Sarda means something like ‘fish from near Sardinia‘. For less wealthy Romans mackerel was ‘the poor man’s tuna’ and even nowadays mackerel is still a good replacement for tuna, although if the flesh is less firm.

All tuna live in shoals and in ancient Italy they used to have watchtowers along the West coast to be able to spot these shoals for fishermen. If a shoal approached the coast, the fish were herded into strong nets and killed with tridents. Fresh tuna, however, was quite rare, as most tuna on sale was salted, for example on Sicily. No part of tuna went to waste either, as the innards were used to make a high-quality kind of liquamen near Antipolus (now Antibes, in the South of France). 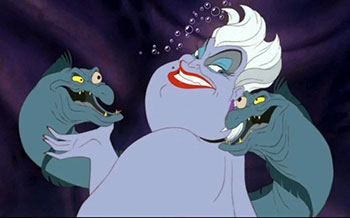 But however great a delicacy tuna is, the Romans liked other fish even more. Especially the Mediterranean or Roman moray (Muraena helena) was popular. This moray is an eel-like predatory fish with a bad temper. In Disney’s Little Mermaid they are the evil companions of the sea witch Ursula. There are several Roman recipes for moray in which they were cooked or roasted and served in a sauce. Rich Romans also kept morays in ponds, and not just as storage for food. Pliny the Elder describes how Antonia, mother of emperor Claudius, had a favourite moray that wore earrings (do fish have ears?), and this fish became a regional celebrity.

The recipe is from De re coquinaria, book 9, chapter 10, recipe 4 according to the edition of Grocock and Grainger (Apicius, a critical edition, see bibliography). They provide a concordance with earlier editions. Jacques André (Apicius, l’art culinaire, 1966) had a very different way of ordering the recipes: he numbered them continually so in his edition this is recipe 424. The text I used below is from the edition of Grocock and Grainger p.294.

The original recipe is not as much an instruction on how to prepare the dish as it is a note about it. I have made some choices for the adaptation, so feel free to use your own version.
Main course for 4 to 6 persons; preparation in advance none, OR 2 hours curing + 6 hours drying; preparation 20 minutes. 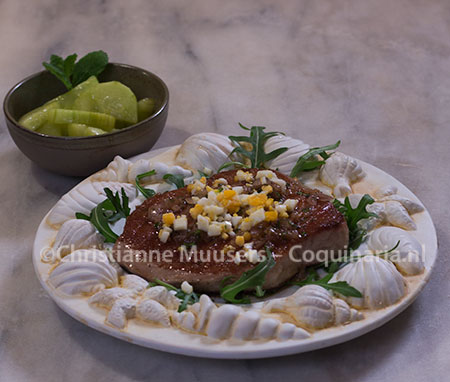 Curing the tuna is optional. To cure the tuna put it in a mixture of coarse sea salt with some crushed peppercorns for two hours. Then rinse the fish, pat it dry and let it dry out for at least six hours in the refrigerator.

Sauce – Temper oil, vinegar and honey. Fry the onion in a tablespoon olive oil until transparent. Add the onion with lovage and dried mint to the dressing. If fresh lovage is not available, use a few drops of maggi Sauce. On the other hand, fresh mint can be used instead of dried mint.
Fish – Either use a charcoal barbecue to roast the fish, or put it in the oven, or fry it in a frying pan.

Arrange the fish on a dish and pour the sauce over it. Or first pour the sauce in the dish and put the tuna on top. Garnish with chopped egg and rucola. Serve with the imperial cucumbers or other vegetables.

In 1886, the Swiss Julius Maggi delevoped a soy sauce-like herbal seasoning based on the meal of beans and wheat, to compete with the meat extract of Liebifg. The taste is much like that of lovage (Levisticum officinale). In Dutch lovage is now even called maggikruid (Maggi herb). Funnily enough, lovage is not actually present among the ingredients of the seasoning. I am not going to repeat the history of Maggi, so if you would like to know more on the subjects Maggi and Maggi-Würze, please follow the links (to the German wikipedia). In this article in the Chicago-Tribune, author Kevin Pang mentions that Maggi seasoning exists in many varieties for specific regions.