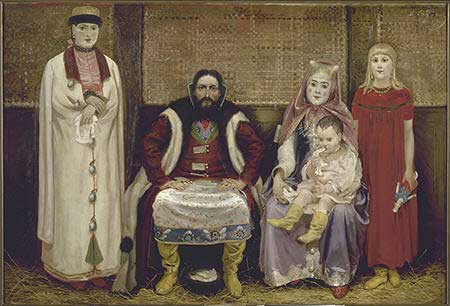 The choice for this recipe is the result of a lecture I gave at the Museum Hermitage in Amsterdam in October 2014. The lecture was complementary to the exhibition Dining with the Czars, which is open for visitors until April 2015. At the end of my presentation all the guests were served a glass of nineteenth-century Russian punch. One of the dishes I prepared during my research is the Vinigret or Salade Russeor, according to some, Salat Olivier.

When researching another culture, one is at a disadvantage if one has no knowledge of that culture’s language(s). And if that language is written in another alphabet than the one you’re used to, it is even more difficult. One must depend on existing translations, or attempt to translate the recipes by using Google Translate. This obviously leads to great translations: Язык бычачий (YAzyk bychachiy, ox-tongue) became language of a bull. It may not be correct, but at least you get a laugh out of it. 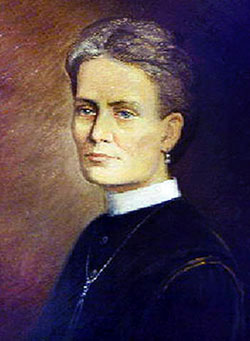 During the second half of the nineteenth century one book was particularly prevalent: A Gift to Young Housewives (Пода́рок молоды́м хозя́йкам), written by Elena Molokhovets. The first and last editions of this cookery book, in 1861 and 1917 respectively, coincided with two important moments in the history of the Russian Empire. In 1861 serfdom was abolished (which did not have immediate positive results), and in 1917 czar Nicholas II was forced to abdicate during the February Revolution.

The first edition did not have any indication of who the author was. Ladies did not stoop to the writing of cookery books, so Molokhovets too wanted to remain anonymous. The second edition did provide readers with the author’s initials. Later editions were published under her full name. Molokhovets was still reluctant, but she was forced to do so  because of plagiarism. It was not until the appearance of the Jubilee edition in 1911 that she declared herself being proud of her accomplishment. Nothing was known about when Molokhovets died, until Dutch Slavist Egbert Hartman (who also maintains a Dutch blog on all things Russian) discovered records showing  Elena Molokhovets died in 1918 in St.Petersburg, at the age of 86 or 87. In Soviet-Russia the Gift was an example of the culinary decadence during the reign of the czars, but soon after the collapse of the Soviet Union new editions of the cookbook appeared.

In Europe the first translation appeared in Germany in 1877. In 1992 Joyce Toomre published a translation of the twentieth edition from 1897 (some of the recipes were left out).  (see bibliography)

The internet is swarming with Russian recipes “from 1861”. These recipes are actually based on Toomre’s translation from the twentieth edition (1897), which was published thirty-six years later. This even occurs with recipes that do not appear in the 1861 edition at all, like Boeuf Stroganoff. I do not know whether people do not read close enough, or whether they just don’t care.
Dear writers: is it really so difficult to clearly state which edition of a historical cookery book you are using? Do me a favour! 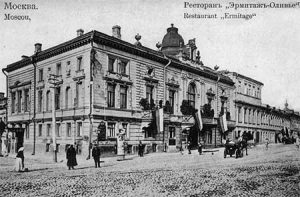 Is Salade Russe in fact Russian?

According to many internet sources, vinigret derives from Salat Olivier, a creation of the French or Belgian cook Lucien Olivier.
But is that true? Not entirely. Olivier (1838-1883) co-owned the Restaurant Hermitage in Moscow from 1864. He is said to have created a salad that became very popular with his customers. He kept the recipe to himself. The salad has been reconstructed based on descriptions from customers. It contains black grouse, veal tongue, caviar, lobster, lettuce, cucumber, roasted soy bean flour (soy Kabul), milk-cap mushrooms and hard-boiled eggs. Everything is cut into small cubes and served with a sauce of olive oil, cream, egg yolks, mustard, vinegar and ‘secret herbs’.
During the Soviet-era the salad is transformed into what we now associate with Russian Salad: potato, onion, carrot, gherkin, apple, green peas, chicken, hard-boiled eggs and mayonnaise.

In Molokhovets’ cookbook this salad is called Винигрет (Vinigret, from French ‘vinaigrette’ which literally means sour wine). This could indicate the recipe has a French origin. However, this kind of salad with a typical combination of vegetables, pickled greens and fish/meat is typical for the Scandinavian cuisine of the nineteenth century, not the French. Therefore I concluded that the Russian vinigret has no French roots, even though it was named after vinaigrette. All Olivier did was getting rid of the typically Russian red beets and sauerkraut to make a salad that fits better into the refined haute cuisine. That does not mean the salad is French in origin.

The Salade Russe on page 428 in La cuisine classique vol.2 from Urbain Dubois and Émile Bernard (1856) does not contain any meat or fish. But on page 354 under the heading ‘Garnitures froides’ you can find a recipe for Macédoine Russe that resembles the Molokhovets’ recipe, except that it doesn’t contain the beans and sauerkraut. Dubois and Bernard do not consider vinigret as a dish in its own right, but merely as a preparation to be used as decoration in other dishes.

Maybe someone with time on his or her hands and knowledge of nineteenth-century Russian could be so kind to look for recipes of vinigret before Molokhovets (1861). When did this recipe first appear in Russian cookery books? My knowledge of the Russian language is very, very limited; otherwise I would have taken on this task myself. In the Dutch version of this page I offer a dinner with Russian recipes from the nineteenth century at my home as a reward. So, if you ever visit the Netherlands…

This is the Russian text from the second edition (1866) of The Gift. According to Toomre in her introduction to her edition of the twentieth edition, the first edition had 1500 recipes. This second edition also contains 1500 recipes, but Toomre writes that some changes were made in this edition. So, without actually having seen the 1861 edition, I will not state that the recipe was already present in the first edition.
My English translation of the 1866 recipe relies heavily on the translation by Toomre of the 1897 edition. I did use the Oxford Russian-English dictionary and Google Translate to check whether there were any differences between these versions. Without having seen the Russian text of 1897, it is difficult to determine whether small differences are the result of the two Russian editions of the Gift or the translation by Toomre.
In later editions this salad is not called vinigret but vinegret. 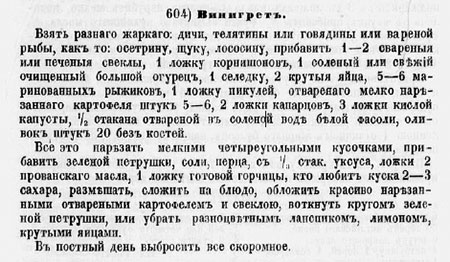 The taste of this salad is more pronounced than that of the average ready-bought salad today. It is important to prepare this dish at least two hours in advance, but preferably even longer. The sauce is more acid than we are used to, as it contains more vinegar than oil. For my version I chose another ratio, as can be seen in the recipe below. If an even smoother taste is preferred, one can use mayonnaise (oil, vinegar and egg yolks) instead of vinaigrette (oil and vinegar). Modern Dutch versions are Potato Salad and Herring Salad.
Main course salad or cold buffet dish for 8 to 16 persons; preparation in advance  1 hour; preparation 5 minutes; decorating the salad 15 minutes. 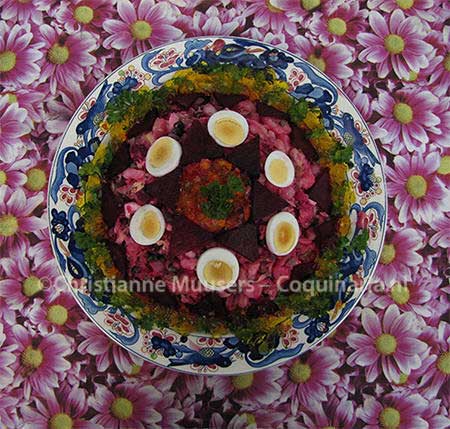 Beets are often just boiled, but when roasted in the oven, they taste better. Wash and clean the beets, but do not peel them. Just wrap them, without drying, in aluminium foil and place them in a preheated oven at 180 °C/355 °F. Small beets take about forty minutes, larger ones need more time. Turn the beets over halfway through. Let the beets cool after roasting until you are able to hold them, and pull off the skin.
Boil potatoes and eggs.
Stew or simmer the meat, or use leftover meat from making stock.
Poach the salmon in salted water.
Cut the cucumber into cubes. Whether you peel it first is your choice. Sprinkle the cut cucumber with salt and let it stand in a sieve for thirty minutes. Then squeeze it gently and pat the cucumber dry. Or you could cut a pickled cucumber into cubes instead. 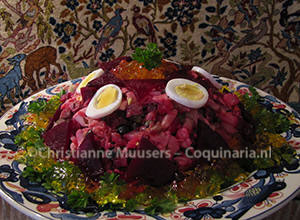 A dish like vinigret really wants to be decorated. Use your fantasy and take your time. The salad is served cold, but not ice-cold. The vinigret in the picture above was placed on the tablecloth of my sister’s garden table, which happened to have exactly colours as the salad. On the left is a picture of the salad from another angle, so you can see the convex shape.

I have translated this Russian word as meat jelly (aspic), and it is prepared with calf’s feet. But according to Molokhovets the jelly is put on ice during setting and whipped with olive oil to create a firm foam. This thick foam is used as decoration. I just used set jelly, so the decoration on the picture is not quite authentic. The aspic could be coloured according by Molokhovets by using red gelatine (apparently this was already available).  One could also add saffron for yellow , extract from cornflowers for blue or spinach for green. Without additions the jelly should be colourless. 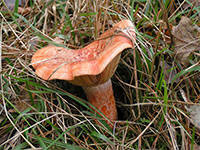 The botanical name of these mushrooms, indigenous to Europe, is Lactarius deliciosus. The ‘deliciosus‘ not only indicates clearly that these mushrooms are not poisonous, but even quite delicious! Russians are fervent gatherers of wild mushrooms to prepare and conserve. For this salad I used ordinary mushrooms: white champignons.

The vegetables are pickled in salt (sol in Russian), unlike in the rest of Europe, where vinegar is the main preservative. The pickled ingredients will start fermenting, like sauerkraut. For an authentic taste it is best to buy your pickles at a Russian or Polish food store, or make your own by using the recipes on this page.