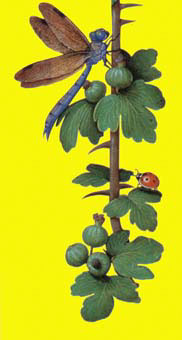 Fish played a prominent role in the daily diet throughout the Catholic Middle Ages, because during set periods and days the eating of meat was forbidden. Lent is the most extended and strict period of dietary restrictions, because not only meat, but all animal produce (butter, cheese, eggs) were prohibited foodstuff. On the weekly fast days the consumption of this derivated foodstuff was allowed. The recipe on this page was meant for just such ordinary fastdays, hence the use of butter. This one recipe describes three different sauces to accompany broiled fish (in particular pike and bream): a butter sauce, a caper sauce, and a gooseberry sauce.

Pike and bream are freshwater fish. Like all fish they have a spawn season, during which it is better not to eat them. The fish are spending all their energy to procreation, which is rather detrimental to their taste, and also: if you want to eat fish next year, you better give the fish the chance to multiply!
The spawn season of pike is from March till May, of bream from April to June. 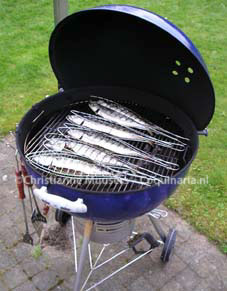 Why then, in spite of what is mentioned above, have I chosen this recipe? Because I love gooseberries, this gooseberry sauce is really tasty, and we are almost at the start of the gooseberry season.

Gooseberries were not cultivated before the thirteenth century, but they are indigenous to Europe.
In the North of France gooseberry sauce was a classic accompaniment to mackerel (the French call the gooseberry groseille maquereau or “mackerel berry”). Mackerel is a seafish with fat meat, very suitable to be broiled on the barbecue. It is one of my favorite fish to eat. That is why is I cooked mackerel when I made this recipe. But you can cook any fish you want with these sauces. By the way: the spawning season of mackerel is from May till July. I have made the gooseberry sauce often to accompany the fishpasties from ms UB Gent 1035.

Yet another reason for choosing this recipe is that it gave me an excuse to haul the barbecue out of the garage for the first time this season! Fish broiled under the ovengrill is tasty, but fish broiled over charcoal gives it just that medieval tweak.

In the nineteenth century it was believed that the Dutch name kruisbes was derived from the Finding of the True Cross on May 3rd. But the medieval names stekelbesij and kroeselbesij (the modern word kruisbes is derived from this) indicate that it is the hairy skin that gave the berry its Dutch name. (likewise in German: Stachelbeere)

The recipe has been taken from the third part of the convolute KA Gent 15. An edition of this cookbook is in progress on Coquinaria, but it has not yet reached the part where this recipe is. W.L. Braekman has published the culinary volumes of the convolute in two separate publications (see bibliography)

[Op visch] buijten den vasten (3.246)
Item neemt boter in een eerde panne, ende asijn, ende suijcker, ende geijnber, ende latet sieden, ende cloppet tot dick is, ende doet dat oeck op ghebraden vijssen, ijst brasem oft anders.
Mer eest eenen snoeck alsoe legten in die scotel, ende doeter capparts over met olij, ende asijn, ende geijnberpoijer, dats sijn saus, ende dienet ter tafelen.
Oft alst inden tijt is van stekelbesijen, soe smoert die besijen in boter, ende doeter wijn in, ende eeck, suijcker, geijnber, ende caneel, ende sofferaen, ende alst dick opgesoden is, soe gietet op die gebraden brasem, ende overstroijtse wel, ende dienet ter tafelen.
On fish outside of Lent.
Add butter to an earthenware pan, and vinegar, sugar, and ginger. Bring to the boil and whisk until it has thickened. And put this (also) on broiled fish, bream or another [fish].
But when it is a pike, lay this on a dish, and put capers over it with oil, vinegar and powdered ginger, that is his sauce, and serve it forth.
Or, when gooseberries are in season, braise them in butter, and add wine, and vinegar, sugar, cinnamon and saffron. And when it has reduced, pour it over the broiled bream, and sprinkle this amply [with spices] and serve it forth.

Reckon on one whole, small fish per person (mackerel, sardine, trout, for example) or 150 gram fillets of larger fish (mackerel, bream, pike, salmon trout). Clean the fish. When broiling a whole fish, one can fill the inside of the emptied fish with sprigs of herbs like dill, parsley, rosemary or thyme, or some bay leaves. When grilling a whole fish, it is best to use a fish grilling basket. Broil the fish over a coal fire until done. Fish fillets or fish slices can also be grilled in the oven or baked in a frying pan.

Choose one of these sauces to serve with broiled fish. Although they are all pictured on the same plate with the broiled mackerel, they do not combine well. 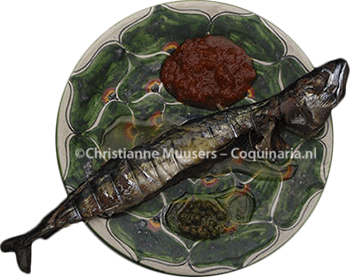 Melt the butter, add the other ingredients. Whisk with a beater to a frothy sauce.
Serve right away, with broiled fish, especially bream.

Make a vinaigrette with oil and vinegar, add rinsed capers and ginger.
With broiled pike.

When you buy fish it is almost always cleaned. Mackerel and sardines however still have their entrails (at least in the Netherlands). The fismonger will draw the fish for you, or you have to do this yourself in your kitchen. When you do, make sure you do this immediately. The entrails of a mackerel deteriorate quickly. If you have bought your fish in the morning and wait with disemboweling it until just before you want to prepare it for dinner, chances are you unpack an exploded mackerel, or a fish with a repulsively soft belly.

These are the pickled unripe flowerbuds of the Capparis spinosa L. The shrub is indigenous to the regions around the Mediterranean, and its flowerbuds were already eaten in Antiquity. They are never eaten raw.