Made with left-over meat from game stock

When preparing a concentrated game stock, there is sometimes enough meat from the bones to make a tasty sauce. I had six kilo (twelve pounds) bones of hare and deer. When I had strained the stock I had almost one kilo of cooked meat. Being Dutch, I wouldn’t think of throwing that away. It was too much to feed it all to the cats, so I made this delicious pepper sauce with it.
However, to get that leftover meat, you’ll have to pick over the bones very carefully after having strained the stock. The gristle has become quite gelatinous, and small pieces of bone will come loose too. Feel with your bare fingers to avoid breaking your molar over a tiny piece of bone. 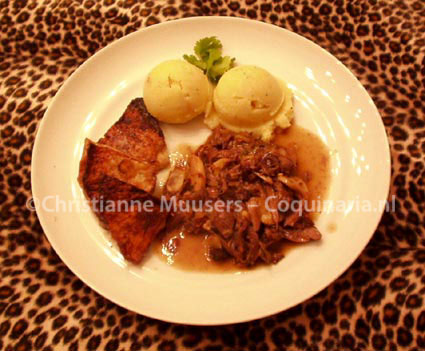 Separate the meat from the bones.

Fry the bacon, add butter, then fry the sliced onion on very low fire for fifteen minutes. Add mushrooms, fry until the liquid from the mushrooms has evaporized. Pour the Madeira in the pan, let that also almost evaporize (to about one tablespoon of syrupy liquid). Add flour, stir well. Then add the heated concentrated game stock a little at the time. Keep stirring. Now add the cooked game meat that has been chopped small, let simmer for another fifteen minutes on a very low fire. Taste the sauce, then add pepper and salt and whatever you want, but taste it first!

Serve with mashed potatoes and fried celeriac (or another vegetable of choice).

When making the game stock you used a piece of celeriac, so now you’re stuck with the rest of the root. Celeriac happens to be an underestimated vegetable. Mostly it is used in salads, but try this to accompany the pepper sauce: Cut the celeriac into thick slices, cut these in triangles. Dip them in milk, then in flour, and fry them a golden brown in olive oil or butter. Sprinkle some salt over the celeriac before serving.

Wine from the Portuguese island Madeira, in the Atlantic ocean. gelegen in de Atlantische Oceaan, ten Westen van de Straat van Gibraltar en ten Noorden van de Canrische eilanden. From the sixteenth century onward extra alcohol was added to the wine to make it less perishable during trans-Atlantic transportation. This as well as the prolonged exposure to high temperatures during transport, resulted in the unique taste of Madeira wine.