This is a very rich ice cream, with sugar, fat and cholesterol. So, why would you want to make it? Because it is simply delicious! The secret for enjoying this ice cream is self-control. Do not make it all the time (just occasionallly), and eat small portions. Governments and manufacturers are wrong in thinking the solution to our health problems lies in altering food to create an illusion of real food which can be eaten in the same amounts as usual. Instead, they should teach the public to eat less. That solution is cheaper, and better for the climate. People who want or have to count calories can use skimmed milk and cream instead of whole milk and heavy cream. However, I prefer eating a little food with a lot of taste rather than a lot of food with little taste.

This recipe uses real cream, real vanilla and no artificial flavourings. It is based on a little book I bought 22 years ago in Bologna: Come fare in casa gelati e sorbetti, or How to prepare ice cream and sorbets at home. The recipe is called Gelato di vaniglia. I made some small adaptations: I remove the seeds from the vanilla pod and leave them in the ice cream, only removing the empty pod, and I have added a pinch of salt.
Snack or dessert for 1 litre ice cream; preparation in advance 20 minutes; preparation 15 minutes plus cooling down and freezing (50 minutes to two hours). 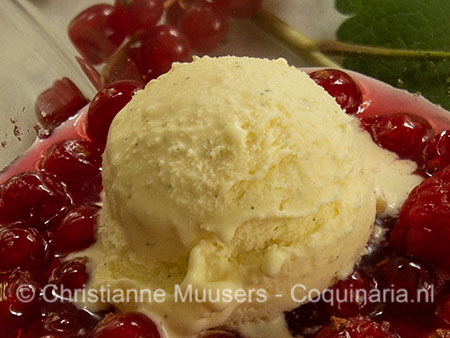 Split the vanilla pod and scoop out the small seeds. Add seeds and pod to the milk in a pan and heat to just below boiling. Cover the pan with a lid and remove from the fire. Let the milk steep for about 20 minutes, then remove the pod. Leave the seeds in the milk.

Beat the egg yolks with sugar until frothy. Reheat the milk to just below boiling. Prepare a custard by gradually adding the hot milk to the egg yolks while beating continuously. Heat the yolks and milk (au-bain-marie if the heat is hard to regulate) and keep whisking until the mixture has thickened. This can take a little while. Pour the custard in a bowl and cover it to prevent a skin forming on top. The best way to do this is by placing plastic foil directly on top of the custard. Let is cool and then put the bowl in the refrigerator.

Add a pinch of salt to the cream and beat it until it is fluffy but does not yet form peaks. Combine with the cold custard and make ice by following the instructions of the ice cream maker, or by freezing it and whisking at intervals by hand. In case of the latter, use a container that can transmit the cold (so, aluminium rather than glass or plastic).

No matter how great vanilla ice-cream tastes, it is seldom eaten on its own. Often whipped cream and fruit is added, or it is served with sweet pastry that is still warm from the oven, like cobbler or these eighteenth-century fritters. The pictures shows half-frozen vanilla ice cream, because my ice cream maker broke down on a very hot day.

A recipe for ice-cream with vanilla
This is a very rich recipe, with whole milk, heavy cream, eggs, sugar and real vanilla.
© Author Christianne Muusers