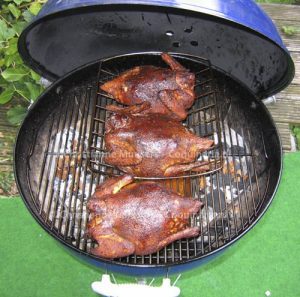 The recipe on this page is taken from a cookbook that I have had in my possession for years, but never used to cook out of. It seemed too much trouble. The book:  Smoke and Spice: Cooking with Smoke, the Real Way to Barbecue

. written by Cheryl Alters Jamison and Bill Jamison. Over 400 pages of text, no pixtures. As it happens, the recipes are absolutely delicious! So I decided to dedicate this page to the book, and I also adapted the method described below for a medieval recipe, with fantastic result.
On the picture on the left you see two chickens from the recipe on this page, the one in the middle is the medieval chicken. My barbecue is a ten year old (that was in 2009) Weber One Touch Gold 57 cm/22.5 inch.

From the book Smoke & Spice and other books and communities on internet I understand that barbecuing and smoking is VERY big in the United States. In the Netherlands the art of grilling and smoking is practised on a small scale on a high level, but there are lots of amateurs, many of whom depend mostly on pre-marinated meat that is done in under twenty minutes, and bottled sauces. Maybe a lot of information on this page is well known to you, but for newbies, let me explain: the recipe on this page is for grilling whole chickens for a long time (three hours) at a low temperature (about 95 dgC/200 oF). For a smoked flavour, you’ll also add moistened wood chunks at intervals.
For this, you’ll need a smoker or a grill with a vented cover and a thermometer you can read without opening the cover. If your grill doesn’t have that, simply drill a hole in the cover and stick in a simple meat thermometer, taking care the tip does not touch the cover on the inside.

Whatever appliance you use, the chicken or meat will not be directly above the charcoals or briquettes. In a covered grill like the Weber you use the ‘indirect method’: fuel lies on the side, in the middle is an aluminium tray or metal pan with water. The chicken lies on the grate above that tray or pan, so whatever drips down will not cause any flames and burn the chicken. The steam will also help keeping the food succulent.

Smoke & Spice offers a lot of recipes and not just for meat and fowl. There are chapters on fish, and even vegetables! But below I describe a recipe for Mustard ‘n’ Lemon Chicken (S&S pp.168/170). I have not used the exact text, but have written the recipe down in my own words. However, this is still the recipe of Cheryl and Bill Jamison. The ingredients are mentioned just before they are needed in the recipe, printed in bold.

Preparations start the day before. Of course you’ve bought a beautiful outdoor chicken that has only eaten organic gourmet chicken feed. You carefully loosen the skin around the meat, without tearing it. The medieval recipe prescribes using the shaft of a goose quill to blow air between skin and meat, I prefer to use my fingers. You start from the neck, at the breastside as well as the back. You wriggle your way under the skin, even the thighs can be reached this way. Wash your hands wellbefore and afterwards, and brush your nails too. People with long nails better leave this to someone else.
You can determine whether your chicken was really an freerange, outdoor chicken: if the skin tears easily, you’ve been had. 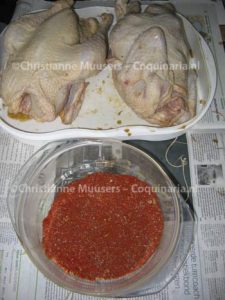 Melt the butter and stir in the Worcestershire sauce. Rub the chicken well with this mixture, ouside, under the skin, and inside. (The chickens on the right have just been treated this way.) Again: wash your hands and brush your nails thoroughly.

It’s a good idea to prepare this rub before you do anything else. Combine the ingredients. To dry the lemon zest, place it ten minutes in the oven at 110 °C/225 °F, then mince it. Save the lemon you took the peel off in the refrigerator to use later in the stuffing.
Reserve one tablespoon of the rub for later use. Now massage the chicken with the rub, again on the outside, under the skin, and the inside. The butter-treatment will make the rub stick. Do the washing ritual again. Place the chicken in a plastic bag, and put in the refrigerator until the next day.

30 minutes before putting the chicken in the smoker or grill

About half an hour before grilling, remove the chicken from the refrigerator. Stuff the cavity with alternate slices of lemon and onion, and rub a half tablespoon dry rub on the outside of the chicken. And … wash your hands again. Soak woodchips in water or beer. These chips will produce aromatic smoke. Normally smoke is a bad sign on a grill, but in this case the smoke is planned and desired.

Combine ingredients in a saucepan, heat until the butter has melted. This is the mop. It can be used to baste the chicken, keeping the meat succulent. Depending on the kind of smoker or grill you use, basting will be every 30 minutes, or at the moments you add fuel.

My grill is a Weber 57 One Touch Gold, bought in 2000, and that is the gril I know. So that is what my experience is based on. Undoubtedly people with other grilling- or smoking equipment know how to translate this to their own situation. However you start your fire, be aware of the dangers, and keep children away.
When the coals are glowing and divided left and right, the cover is closed. You experiment with the venting holes in the cover and below, until the temperature is around 95 °C (200 °F). Yes really, that low. The ventholes in my Weber are all pratcically closed to keep the temperature that low. Now put a aluminium tray with water between the coals, and place the chicken (or chickens, my Weber fits three) on the grill above. Close the cover and watch the thermometer, the temperature should again rise, keep it between 82-110 °C/180-220 °F, not higher. Keep checking on the tempreature, it is essential that you can read it without opening the cover, because each time you lift the cover, temperature will change.
For the next three hours check once in a while whether there’s extra fuel needed (I do that once every 45 minutes), adding soaked wood chips for smoke on the coals, and basting the chicken with the mop at the same time. After about 75 minutes, turn the chicken on its back. Check after 2½ hour with a meat thermometer whether the chicken is done. If the inner temperature is around 80 °C/175 °F, the chicken is ready. If it hasn’t reached that temperature yet, leave it for another 30 minutes before checking again.
Do not panic at the sight of the black skin, it is not meant to be eaten, but it has protected the underlying meat from burning and drying out, and because the rub was also massaged UNDER the skin, the chicken meat will still be very tasty.

When the chicken is done, first let it rest five to ten minutes on the cutting board, covered with crinkled aluminium foil, shiny side down. Then carve the chicken up: wings, thighs, the two breast pieces which you can cut in chunks or slices, and pick the carcass clean. Leave the skin on if you want, eaters can remove it themselves.

Extra recipe – Salmon from the bbq with Teriyaki Sauce

For my non-meat-eating daughter I had prepared a piece of salmon fillet. Made Teriyaki sauce (1/2 cup Japanese soy sauce, 1/4 cup each from dashi, sake and mirin, 3 Tbsp sugar; heat in a sauce pan until sugar has dissolved), rubbed the salmon 30 minutes in advance with two tablespoons of the sauce. Half an hour before the chickens were done, the salmon went on triple-folded aluminium foil, directly above the coals. Afterwards the rest of the Teriyaki sauce was reheated and served with the salmon.

How to smoke a whole chicken
© Auteur Christianne Muusers