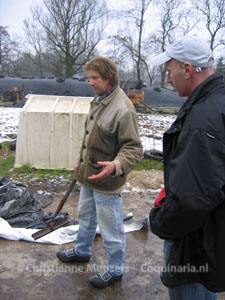 Recently I joined Carolina Verhoeven, who until 2010 owned the Culinary Historical Museum in Appelscha (in the North of The Netherlands) and is now head of the Culinary Heritage Centre in a visit to the biological butcher shop of Bernard Roosendaal in Drachtstercompagnie. Slagerij Roosendaal was a biological/organic butcher’s. They also had live stock, and functioned as a care farm.

We watched how a lamb and half a pig were cut up, and how bloedworst (black pudding), zure zult en hoofdkaas (brawn or head cheese) and balkenbrij (scrapple) are made. So here is the story, with pictures. On the right you see the butcher in discussion with a farmer regarding the storage of grain for cattle in winter.
Recipes for making Mortadella and Lucanian sausages. 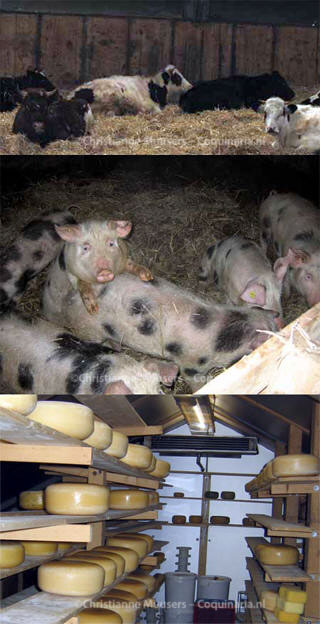 There’s no way around it: a butcher works with meat, and that comes from animals. Lots of people have no problem eating meat, as long as they can’t recognize that it’s from an animal: meatballs, but not a whole chicken, fish fingers, but no blue trout. I advise those people to click away from this page.
Me, I also have a difficult time when I realize that those cuddly little lambs, bright pigs and doey eyed calfs will end up served on a plate. But when you limit your carnivorous urges to meat that you know comes from animals that have had a relatively good live, and compensate the extra cost by eating vegetarian meals a couple of times a week, your conscience might be more at ease.

The cattle and pigs that butcher Roosendaal processes are all from biological/organic farms. He also keeps his own pigs, from an old, slow growing breed that has been bred back from near extinction, the Bentheimer Bunte (German site). This pig breed originates from the County of Bentheim, just over the Dutch border in Germany. The oldest mention of the Bentheimer Bunte is from the middle of the nineteenth century.

The farmer we visited owned both milking cows and cattle for meat, from various breeds that I do not remember. Pigs and cattle were in the stables (it was early February), but as soon as the weather allows it, they will go outside again. The farmer’s wife makes cheese (type Gouda cheese), using a vegetarian rennet. We tasted several of the cheeses, some with herbs, and one so old the salt cristals crunched between your teeth. Delicious.

Bernard Roosendaal comes from a family of butchers, his father, grandfather and greatgrandfather were all butchers. He loves curing meat and making sausages: boning meat is a skill, but making cured meat and sausages is an art. Bernard’s father has officially stopped working, but he is still a regular presence at the butcher’s. The children that visit the care farm all lovingly call him Opa (grandpa). Old mr Roosendaal showed us how to make black pudding, brawn/head cheese and scrapple.

I’m not a vampire, but one can wake me in the middle of the night for a slice of black pudding! Ancient cookbooks often have recipes for sausages and puddings based on pig’s blood. In times when pig were kept for home-slaughter (or let a travelling butcher do the work), nothing of the pig was wasted, and that included the blood. Although the blood of sheep or cows can also be used, pig’s blood is the best.
One picture is missing: of a slice of the black pudding. I had some, but they were eaten before I thought of the camera.

Here are some pictures of making zure zult and hoofdkaas. It is difficult to find exact equivalences in English. Brawn (BrE) or head cheese (AmE) come close (actually, hoofdkaas literally means ‘head cheese’). But zure zult and hoofdkaas are not the same. The difference is in the spices that are used, and the vinegar that is used for zure zult, but not for hoofdkaas. However, the same meat is used for both: boiled pig´s heads, or heads of calf or cow. Let’s call zure zult ‘vinegared head cheese’ or ‘vinegared brawn’. After picking the meat from the boiled heads to remove gristle and such, and spicing it, the meat mixed with some of the stock is poured in moulds. It thickens during cooling.

Meat of a pig’s head is generally not considered as food fit for humans in the Netherlands. In France you can buy delicious demi salé pig snout and pig ears, but not in my country. I don’t know how it is in other countries. However, if one finds a butcher who slaughters his own pigs, or who is willing to order something for you, ask for the fat meat from the pork’s jaw. It is very tasteful. In the medieval Dutch manuscript KANTL Gent 15 is a delicious recipe with this head meat: sucarij.

Balkenbrij is not exactly the same as American scrapple, but it comes close. Stock from boiled pig’s heads is used, with ground liver and buckwheat meal, and ground aniseed or other sweet spices (here, only aniseed was used). This is boiled until it is a thick mass. A kind of liver sausage without sausage casing.

My day at the butcher’s
The story of my visit to a biological/organical butcher, with pictures how to prepare black sausage, brawn and scrapple
© Author Christianne Muusers