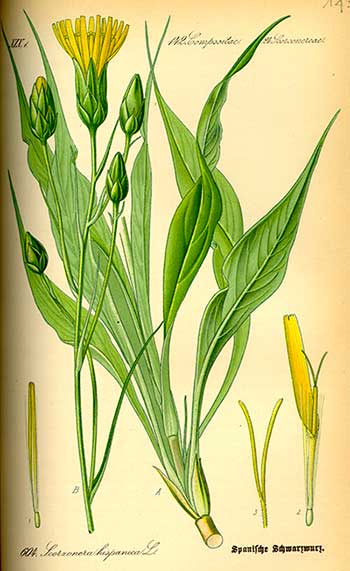 There are two vegetables that look like asparagus once they’re peeled: salsify and scorzonera or black salsify. Both are winter vegetables, and both are the root of a plant, while asparagus is actually the stalk with the bud. According to Allan Davidson, salsify (Tragopogon porrifolius) is better known than scorzonera (Scorzonera hispanica), but in the Netherlands at least it’s the other way around. Scorzonera were called ‘winter asparagus’ in nineteenth-century Hollland; they are in season from October to March. The roots are high in nutritients, which makes them valuable as winter food. The name black salsify indicates that the roots have a black skin, while salsify (Tragopogon porrifolius) is whitish.

The culinary use of scorzonera or black salsify is more recent than salsify; it wasn’t until the seventeenth century that scorzonera was introduced to the table as a substitute. Below I will refer to scorzonera as black salsify.

Black salsify at the end of the eighteenth century

Even though black salsify was a kitchen vegetable since the seventeenth century, most Dutch cookbooks from the eighteenth and nineteenth century keep it simple: black salsify was served with a butter sauce, sometimes with addition of parsley, and that’s it. But in fact this is quite a good combination, judging by the recipe from the Nieuwe vaderlandsche kookkunst (New national art of cooking) from 1797. More about this book can be read at the recipe for Coteletten-Toert (cutlet-pie). Other recipes from this cookbook on Coquinaria: Quince jelly and Custard with ratafia.

Nieuwe vaderlandsche kookkunst (New national art of cooking) from 1797. The picture of the text is from the facsimile edition from 1976 (see bibliography). The letter ‘f’ is not present in the text. All the letters resembling f are in fact an obsolete form of the letter ‘s’. 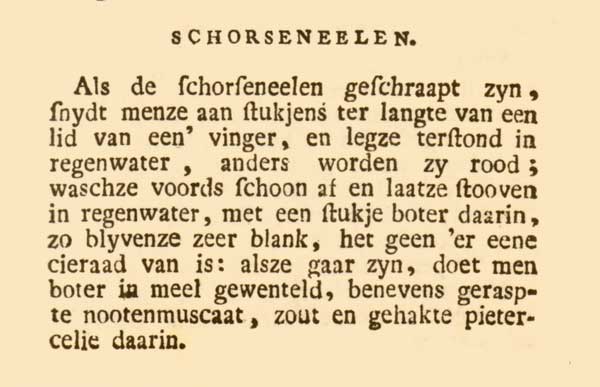 Black salsify (scorzonera).
When the scorzonera have been scraped, cut them into pieces the length of a finger, and immediately put them into rain water, lest they turn red. Then wash them clean, and stew them in rain water, with a piece of butter. That will make them stay very white, which is their asset. When they are done, add butter rolled in flour, and grated nutmeg, salt and chopped parsley.

What catches the eye here is the manner in which the sauce is thickened, with a kind of beurre manié. This method consists of kneading equal weights of butter and flour together, than adding this in small lumps to the boiling or hot liquid while beating the sauce with a whisk. The sauce will thicken very quickly.
Although the base (equal amounts of butter and flour) is the same, this method is different from thickening sauces with a roux. For a roux the butter is melted first, and the flour has to be heated together with the butter before adding liquid.
Side dish for 4 persons; preparation in advance 15 minutes; preparation 25 minutes.

Clean the black salsify. Sounds simple, but actually doing it takes some work. Some suggest scraping the root like a carrot, others use a peeling knife. I prefer a combination of the two: after rinsing the roots under warm water from the tap, I first use a peeler. Then I scrape any remaing skin off. Then cut the root at once in the desired length, and plunge in cold water.
Knead butter (at room temperature) and flour into a paste.

Boil the black salsify in clean water with a lump of butter for fifteen to twenty minutes. Because the melting butter will form a layer of fat on the water, the peeled black salsify will not be touched by air during boiling, keeping them white.
Drain the vegetables, but catch the cooking liquid. Remove most of the butter floating on top of the liquid.
Take a quarter litre of the cooking liquid, bring to the boil in a small saucepan. add small lumps of the beurre manié whilst beating with a whisk. Heat through for five more minutes on a slow fire, then finish it off with salt, pepper, nutmeg and parsley. Return the vegetables to the saucepan to make them warm again.

At once. I prefer boiled potatoes with this, and, because it is winter, some black pudding with fried apples (see picture). 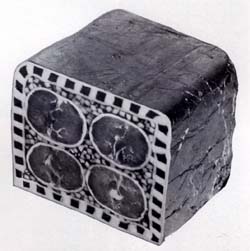