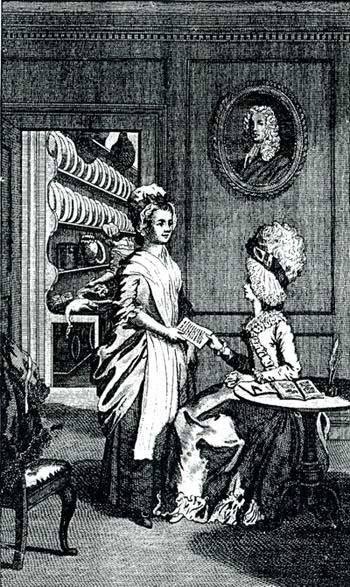 An recipe from Hannah Glasse

Disquised food is always fun. That’s why there are several recipes for fake hedgehogs. You can find more information about the hedgehog as subtlety at the medieval recipe for a meatloaf-hedgehog. The recipe on this page from the eighteenth century is not savoury, but a sweet version with marzipan. It is taken from a very popular cookery book from 1747, written by Hannah Glasse. This cookbook, The Art of Cookery, made Plain and Easy, was printed as a beautiful  facsimile edition in 1995, titled First catch your hare. The article on Hannah Glasse from Wikepedia has used a lot of information from the introduction in this edition. The picture on the left is the Frontispiece of the 1775 edition.

The Art of Cookery, made Plain and Easy from which the recipe on this page comes, appeared in 1747 on subscription. The author was not named, just “a Lady”. Still, it was no secret that Hannah Glasse (1708-1770) was the author. However, some gentlemen speculated in 1778 that she couldn’t possibly be the author, because”Women can spin very well; but they cannot make a good book of Cookery” (Citation from The life of Samuel Johnson, LL.D. by James Boswell, 1791, taken from page v of the introduction to the facsimile edition First catch your hare). This myth circulated nearly a century and a half.

This recipe is from chapter XV of The Art of Cooking made Plain and Easy, ‘Of making CAKES, &c.’ (p.146). But this recipe already appeared in chapter IX For a Fast-Dinner, a Number of good Dishes which you may make use of for a Table at any other Time (‘Fast’ as in fasting, not quick), on page 85. The main difference is that the meat jelly is replaced by hartshorn jelly (apparently the antlers of a stag were not forbidden as ingredient on fast-days). It is served cold as a side dish during the second course, as centre-piece for supper, or in a Grand Dessert. There is a second hedgehog recipe in this chapter, using bitter almonds, saffron, sorrel, nutmeg, mace, and lemon and orange peel, served hot during the first course.

To make a Hedge-Hog.
Take two Pounds of blanched Almonds, beat them well in a Mortar with a little Canary and Orange-flower Water, to keep them from oiling. Make them into stiff Paste, then beat in the yolks of twelve Eggs, leave out five of the Whites, put to it a Pint of Cream, sweeten it with Sugar, put in half a Pound of sweet Butter melted, set it on a Furnace or slow Fire, and keep it constantly stirring, till it is stiff enough to be made into the Form of an Hedhe-Hog ; then stick it full of blanched Almonds, slit and stuck up like the Bristles of a Hedge-Hog, then put it into a Dish, take a Pint of Cream, and the yolks of four Eggs beat up, sweetned with Sugar to your Palate. Stir them together over a slow Fire till it is quite hot, then pour it round the Hedge-Hog in the Dish, and let it stand till it is cold, and serve it up — — Or a rich Calf’s Foot Jelly made clear and good, pour into the Dish round the Hedge-Hog ; and when it is cold, it looks pretty, and makes a pretty Dish ; or looks pretty in the Middle of a Table for Supper.

The hedgehog is made from a kind of marzipan, and surrounded by sweet custard or savoury meat jelly. The marzipan is sweetened, but not as much as modern marzipan. Which is probably why meat jelly is an alternative in serving. So, if you want to serve the hedgehog with custard, use more sugar, and if you serve it with meat jelly, use less sugar.
The hedgehogs on the picture are reddish. That is because I added some food colouring to the almond paste.
The marzipan and custard are very filling. If you want to serve this as dessert, I think the amount would be enough for 24 people. The two hedgehogs on the picture are one third of the marzipan from the recipe, the custard is from 1/4 litre cream. If you serve all marzipan as hedgehogs, at least double the amount of custard. Preparation 45 minutes + cooling. 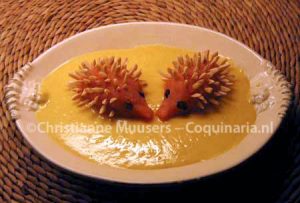 Prepare the almondpaste – Temper almond flour with sugar, orange flower water, eggs and yolks. Melt the butter without browning, add this together with the cream to the almondpaste. Knead or stir until it is a smooth paste. Put it in a pan with a thick bottom, and heat slowly while you stir with a wooden spoon (or use an electric mixer with dough hooks) until the paste has thickened. This will take fifteen to twenty minutes. Let it cool, and form one big or six to eight small hedgehogs.Put them on a dish with slightly raised sides.
If you can’t find ready made almond sticks, cut the spines yourselve from blanched almonds (ten to fifteen almonds for one small hedgehog). Roast them in a dry skillet until slightly browned. Stick them in the hedgehogs, like spines.
Use the rasins for the eyes.
Prepare the custard – Beat the yolks with the sugar. Stir in the cream. Put in a small saucepan on a slow fire, and keep stirring until the custard has thickened (here you can also use an electric mixer, with whip hooks). This will take ten to fifteen minutes. Pour the still warm custard around the hedgehogs in the dish, and let cool. In a modern recipe vanilla would have been added.
Or prepare the jelly – See this recipe for meat jelly as was meant by Hannah Glasse.
You can use gelatine leaves or powdered gelatine instead, with water and syrup. The hedgehogs will rest on a coloured nest. You could cut fruit  to form floating flowers in the clear jelly.

In the original recipe it is mentioned that this dish could be used as table decoration. It would stand on the table during the whole meal. You can do that too, of course, but the hedgehogs can also be served as dessert (although in that case I certainly wouldn’t use meat jelly).
One of the other hedgehog recipes in Glasse’s book also suggests serving the hedgehogs with cold cream, sweetened, with white wine and the juice of a Seville orange.

You may not know this, but almond paste, or marzipan, is traditional food in the Netherlands (and parts of Belgium) around the feast of Saint Nicholas (the evening of 5 December). Another tradition for this feast is giving small presents to each other, which are disguised as something else. We call them surprises. Often the packaging is more important than the present, some are real works of art. You could hide a small present in a marzipan hedgehog as surprise on Saint Nicholas’ Eve. The presents are often accompanied by poems, sinterklaasgedichten, in which the receiver’s good and bad actions/character traits during the past year are reviewed in an humorous way.
Recipes for Dutch Santa

Ground almonds can be bought in specialized food stores and maybe patisseries. You can also ground blanched almonds in a blender or mortar. Ground almonds are comparable to shredded coconut: you can make ‘milk’ with it. Almond milk is used in medieval recipes to thicken sauces (just like coconut milk is used in the Indonesian and Indian kitchen). During Lent almond milk was the most important substitute of dairy products (milk, cheese, butter, eggs). There are recipes for almond butter (think: peanut butter) and almond cheese, which resembles marzipan. The substitution of almonds for dairy products was a good one: 100 gram almonds contain twice as much calcium, five times the amount of phosphorus, and no less than hundred times as much iron as 100 gram milk (without industrial additions). Also, almonds contain more vitamin B1, B2, B6, and more β-carotene, 10% fibres and no cholesterol. Just one negative point: they also contain ten times the calories fat milk has.

Simply cane sugar from the plantations on Canary Islands.

From the antlers of a stag. It used to be a source of ammonia, and was used in the production of smelling salts. In England hartshorn was used in the 17th and 18th century to make jelly. It was also used as a rising agent under the name of baker’s ammonia (or ammonium carbonate).

This is made with the flowers of the bigarade or Seville oranges. It originates in the Middle East where it was used to flavour syrups and dishes. In Europe it was first used to perfume bed linen, but by the seventeenth century it was also popular as food flavouring.