Decorative and delicate in taste

This is a very special way to serve hardboiled eggs. You prepare them in advance, all you need to do is peel them before serving them. The result is beautiful marbled eggs with the subtle taste of spices. Do not be put off by the long boiling time, the eggs really will be fit for consumption!
The recipe is for Reken 1 egg per person, if you boil more than 8 eggs at a time, double the amounts for the cooking liquid; preparation in advance 6 minutes; preparation 90 minutes plus 12 hours to marinate. 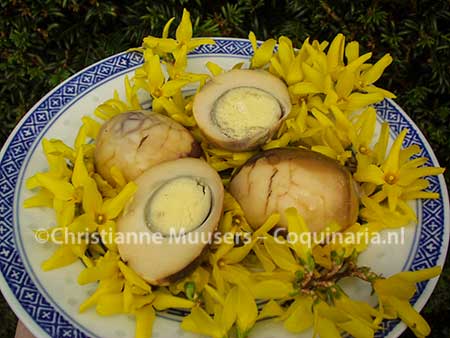 Do not use newly laid eggs, for these are very hard to peel. The eggs for this recipe must have been turned regularly during storage, for the yolk to be in the centre of the egg. Boil the eggs for six to eight minutes with some salt added to the water (I always start with the eggs in cold water, and start timing when the water boils). Rinse them under cold water and let them cool.

Take one egg in the palm of your hand, and carefully tap on it with the convex side of a spoon until the shell is covered with fine cracks. Put the eggs in a pan in which all the eggs fit snugly. Add spices, tea leaves and soy sauce. Add enough water to cover the eggs. Bring to the boil, stir occasionally until the tea leaves stop floating on the surface. Cover and let it simmer on a very low fire for about two hours. Then take the pan off the fire, and let it stand for at least twelve hours (up to 36 hours) at room temperature.

Do not peel the eggs until just before serving. With each egg it will be a surprise how it has turned out. Some will be marbled all over, others have large brown spots with darker marbling (here the shell was cracked a bit too much). But, however they will look, the taste will be great!

The flavour of anise is much appreciated all over the world. Aniseed is indigenous in the Middle-East, and was used around the Mediterranean at least from the fourth century bC. The seed is from an annual plant called Pimpinella anisum. The distinctive sweet taste comes from anethole, an essential oil. In China grows Illicium verum, a small evergreen tree related to magnolia. Its dried, star-shaped fruit are also rich in anethole. See Fennel.