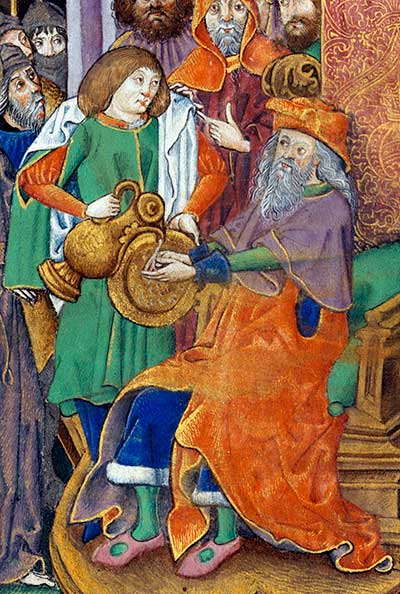 Coquinaria has lots of medieval recipes, but how do you eat these dishes? With your hands!
Eating with a fork became the thing to do in upper class European courts during the sixteenth century. Lower classes kept eating with their hands as late as the eighteenth century.

Eating your food with fork AND knife is a fairly recent custom, from early twentieth century. Before, people ate in the same way as many Americans still do today: fork in the right hand, and only when something needs to be cut, the fork is transferred to the left hand. The knife was only in the right hand while cutting food, otherwise it was laid down on the table, and the fork was returned to the right hand. But before the table fork came into use, one ate with his fingers.
Table manners are relative, what is polite in one culture, is rude in another time or place.

In some ‘medieval’ movies you can see knights in complete harnesses grabbing fat roasted chickens, and tearing the meat off the carcass with their teeth. I’m sorry to dissappoint you, but that is just not the way it was. Then just as now a meal was a social event, dictated by rules. Eating with your hands did not mean everything turned into a big mess. On the contrary, rules were even more important than nowadays. Even though bacteria were still unknown, hygiene was considered important. To wash your hands before and after dinner, and sometimes also in between courses, was certainly not an empty ritual.

On the picture Pilate is washing his hands in innocence. This is also how hands were washed before a meal and sometimes between courses. The servant has a towel draped across his shoulders.

Here I want to share with you a fragment from the Disciplina clericalis, written by Petrus Alphonsus, a Spanish Jew from the eleventh century who had converted to christianity. The Latin text I found on the internet, the translation is mine. I have allowed myself some freedom in the translation, for readability.

Filius: O pater, quare oblitus es dicere quomodo debet homo comedere coram rege?
Pater: Non oblitus fui dicere, quia nulla differentia est inter comedere coram rege et alibi.
Filius: Dic ergo quomodo ubique debeam comedere.
Pater: Cum ablueris manus ut comedas, nihil tangas nisi prandium, donec comedas; nec comedas panem priusquam veniat aliud ferculum super mensam, ne dicaris impatiens; nec tantum ponas bolum in ore tuo, ut micae defluant hinc et inde, ne dicaris gluto; nec glutias bolum priusquam bene fuerit commasticatum in ore tuo, ne straguleris; nec pocula sumas donec os sit vacuum, ne dicaris vinosus; nec loquaris dum aliquid in ore tuo tenueris, ne aliquid intret de gutture in intimam arteriam et sic sit tibi causa mortis; et si videris bolum quod tibi placeat in parapside coram sodali, ne sumas, ne dicatur tibi prava rusticitas. Post prandium manus ablue, quia phisicum est et curiale; ob hoc enim multorum oculi deteriorantur, quoniam post prandia manibus non ablutis terguntur.
Son: O father, why did you forget to say how a man must eat in the presence of the king?
Father: I did not forget to say it, because there is no difference between eating in the presence of the king and elsewhere.
Son: Then tell me how to eat anywhere!
Father: When you have washed your hands to eat, don’t touch anything but your food as long as you eat; don’t eat your bread before other dishes are served, so as not to be called impatient. And do not stuff your mouth full of food so that crumbs fly everywhere, or they will call you a glutton. Also, refrain from swallowing your morsel before you have chewed it well in your mouth, to prevent suffocating. Don’t take your goblet before your mouth is empty, or you’ll be considered a drunk. And don’t speak with your mouth full, that nothing will come from your gullet into your throat and thus will be the cause of your death. And when you see a tasty morsel in your neighbour’s dish, don’t take it, or you will be thought an uncouth lout. Wash your hands when dinner is over, because that is according to the health theory (?) and speaks of community spirit. Because the eyes of many are deceived, that they wipe their hands without washing them after the meal.

I love this text! But mind you, just as there are people today that know how to eat civilized and people that don’t, in those days there were also people who knew how to behave, and ‘uncouth louts’. 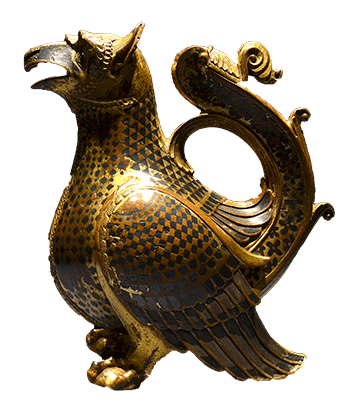 How to eat without cutlery

How does one eat only using fingers? Use just one hand, the other stays clean. From that single hand only thumb, index finger and middle finger are used, and from those only the outer phalanx is used. That way, one can eat quite decently. Of course, dishes like pottage or porridge were eaten with a spoon. Sometimes the table was laid with knives, or there were servants who would carve the food into bite-size chunks. It was also common to carry your own knife and spoon with you when going somewhere to dine.
So eating with one’s fingers does not have to end with messy clothes, furniture and floors. It can even add an extra dimension to eating: the sense of touch is now used. No wonder some children do not care to use eating utensils, food tastes better when feeling it with your fingers too. 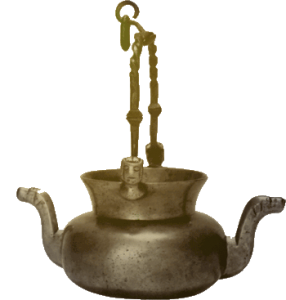 Because the food was served in shared dishes, even medieval people knew the importance of good hygiene. It was a sign of courtesy if the host himself would pour water over the hands of his guests, but servants (‘ewerers’) could also be allocated to the task. There was a towel to wipe the hands on. That towel was a linen cloth, not terry-cloth (which is a nineteenth century innovation).

The water was poured from beautiful vessels, made especially for this, often shaped like an animal. It was called an aquamanile. Above there is a picture of a very luxurious one from the twelfth century. On the left there is a picture of a much simpler model, from the fifteenth century. This did not stand, but was hung from a hook. Water could be poured by tilting the vessel so the water run from one of the two spouts. On the woodcut below you can see the same vessel hanging in the upper right corner, with a dish to catch the water, and a towel rail next to it.

Below you’ll find a ‘recipe’ for water to wash your hands, from the Ménagier de Paris.  My favourite is the combination of citrus fruit with sage leaves, that will make your hands smell lovely, and also makes your skin soft and supple! The Ménagier de Paris (edition Brereton and Ferrier, see bibliography) is a cookbook from the end of the fourteenth century. More on the Ménagier can be read at the recipe for Mustard and Hypocras.

It is just like making tea. The orange in the recipe was a sour orange, sweet oranges were only introduced in Europe at the end of the fifteenth century (and this recipe is from the fourteenth century). Sour oranges have a short season, they are available in January/February. Use a sweet orange instead, or add a slice of lemon. Smells good too.
For 4 to 8 pair of hands; preparation 5 minutes + cooling down. 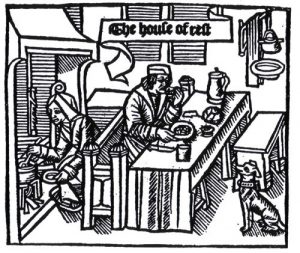 2 liter water
15 sage leaves, or some sprigs of camomille and marjoram, or rosemary or bay leaves
3 slices of orange and 1 slice lemon (optional)

Pour boiling water over the citrus fruit to remove the wax layer.
Put everything in a pan, bring to the boil, let simmer for five minutes. Then strain the water, and let it cool to just a little more than hand warm.

To ‘serve’ the water you can use a matched set of water jug and basin. Pour the water over the hands of your guests above the water basin. Then you present the towel. If you want to be in style, use a linen cloth (a dish towel or something?), not a terry cloth towel.
Of course, after having cleaned your hands the medieval way, you have to eat the medieval way too: with your fingers!

The custom to wash hands before dinner dissappeared during the seventeenth century. From then on, guests were handed moistened towels to wipe their hands on. The Ecole parfaite des officiers de Bouche explains it like this: “One did this in the past (washing hands), but nowadays one does not pour water over hands in Noble Households. One has a moistened napkin ready that is offered on a tray, on which the invited or ordinary people that join the meal wipe their hands, presuming that the Maître d’Hotel has already served the first course.” (free translation from the ninth edition from 1713, p.4).