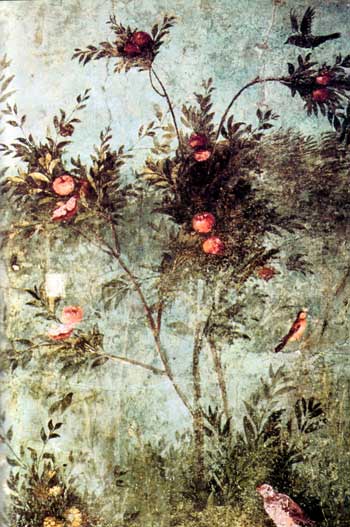 The classical Roman kitchen consisted of much more than spectacular and pretentious dishes with exotic ingredients. On the contrary, a true Roman appreciated simple food with vegetables and fruit, like the recipe of this page, Roman apricots. This dish was not a dessert, but was served during the first course of the meal, the gustatio.

Apricots are not indigenous to Italy. The fruit originated in China, where it was already cultivated two thousand years before its introduction, in the first century B.C., in Persia (Iran). Shortly thereafter the apricot reached Greece and Rome. The Romans called the fruit praecocium, because of its early maturation. In the English apricot you can still recognize the Latin name.

Apicius or not Apicius?

The recipe is from the well known cookbook De re coquinaria. This book was mistakenly attributed to Apicius Caelius because of the abbreviature API CAE on the title page of one of the manuscripts, when it was rediscovered in the sixteenth century. No evidence has been found that this man ever existed. Another Apicius became the new candidate, Marcus Gavius Apicius. There was a book on gastronomy written by a certain Apicius during the first century A.D., but that no text longer exists. The name Apicius however, became synonymous with gourmet or foodie (just like the name of that other glutton, Lucullus), so it’s not impossible that in the fourth century A.D. a collection of recipes was published under this name. More on De re coquinaria in the recipe for Roman mussels.

The apricot dish can be found in the fourth book (of ten) of De re coquinaria, titled in Greek Pandecter (The Greek language had the same prestige in classical Rome as French had in nineteenth-century Europe). Pandecter means ‘composed dishes’, and offers recipes for salads, stuffed omelets, stews with fish and meat, souplike dishes, and appetizers. The patina with quails and asperges is also a recipe from the book Pandecter.
More about the Roman cookbook De re coquinaria here, at the recipe for Roman Mussels.

The last time I published a Roman recipe on this site was 2005. Since then a beautiful new edition of De re coquinaria was published, simply titled Apicius. The edition of the original text and its translation is by Christopher Grocock and Sally Grainger. The Latin recipe is cited from this edition ( p.202), the English translation is mine (but not because the Grocock/Grainger translation wasn’t correct. On the contrary, it’s probably better, so buy the book, see bibliography.

There are several sites on the internet that have published this same recipe. You can see how indiscriminately people copy each other’s pages, because in a lot of versions there is an advice to use a bag of mint tea instead of dried mint. So simple to remove the bag after preparing the dish! But … why should the dried mint be removed at all?
The amounts of pepper and vinegar used in the recipe are large for modern standards. The Romans however loved sour and peppery dishes. Add an extra twist of the peppermill and an extra dash of vinegar just this once, then prepare it to your own taste next time if it’s too much.
What to do with the cold water mentioned in the recipe? Many modern adaptations leave it in the sauce, but I think the apricots should be drained and prepared without water (except for the little amount needed for the cornflour).
Starter or dessert for 4 persons; preparation in advance 35 minutes; preparation 15 minutes. 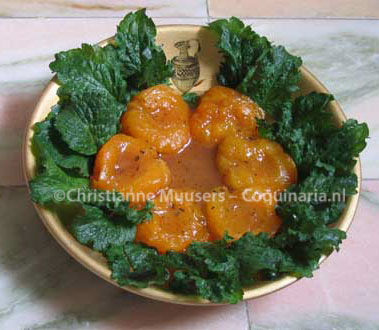 Cut the washed apricots in half, remove the stone. The skin can be eaten, so just leave it on.
Temper pepper, mint and liquids.

Pour the sauce over the apricots in a small pan, mix well, and simmer for about ten minutes until the apricots are soft. Remove the apricots from the pan.
Temper cornflour with cold water. Stir well, no lumps should remain. Then add this mixture to the sauce in the pan and stir until the sauce has thickened.

Arrange the apricots on a serving dish, or three halves on individual dishes. Pour the sauce over the fruit, sprinkle with some more pepper if you dare, and garnish with fresh mint leaves.
Romans ate with their hands. So be assured that this dish was not served piping hot, but warm or luke-warm. 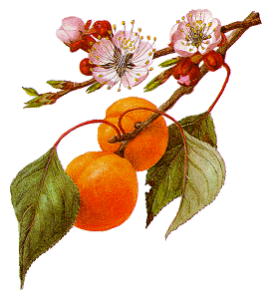 The apricot (Prunus armeniaca) belongs to the same famliy as prune, peach, cherry and almond. These fruit belong to the larger family of rosaceous plants, which also contains apple, pear and quince. The fruit originated in China, where it was already cultivated two thousand years before its introduction, in the first century B.C., in Persia (Iran). Shortly thereafter the apricot reached Greece and Rome. The Romans called the fruit praecocium, because of its early maturation. In the English apricot you can still recognize the Latin name.

A kind of starch. Today most starch is made from maize or potatoes, but in Roman days it was made from wheat, by repeatedly moistening and drying in the sun of wheat flour. The final result was starch, amulum.

A clear liquid made of small fermented fish with much salt and sometimes alsoe several kinds of dried herbs. The Romans used liquamen or garum in the same way we use salt. There is however a difference: salt dehydrates food, liquamen adds liquid to a dish. It was produced in factories and sold in amforas. There were many qualities of garum, from cheap to very expensive. Apicius would no doubt only have used the very best quality. Nowadays in the Far East a kind of fish sauce is still in use in much the same way as the Romans used garum. You can use these sauces as a substitute for garum: Vietnamese nuoc-nam, or Thai nam-pla. You can also try to make your own garum, as the Romans made it at home when they were out of stock (recipe).

Sweet white wine used in recipes from Roman antiquity. The wine is sweet because of the partly dried grapes that were used for it. They have a higher sugarcontent then fresh grapes. In Italy passum-type wines are still being produced, for example the Vino Santo.

A Roman recipe for apricots, as starter or as dessert
© Auteur Christianne Muusers