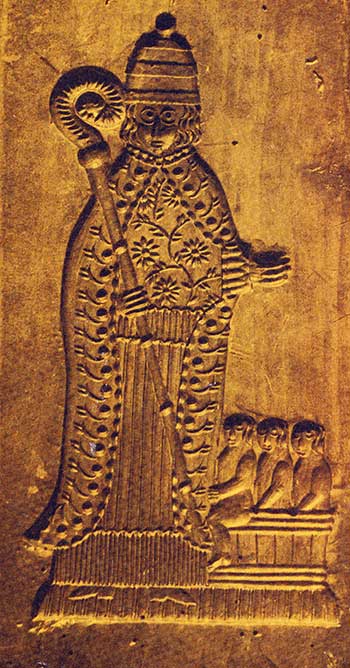 Speculaas or speculoos is one of the Dutch culinary specialties. It is a spiced cookie, made with wooden forms or moulds. They are typically winterfood, and especially associated with the feast of ‘Sint Nicolaas’ or Saint Nicholas, the original Santa Claus. This feast is celebrated on 5 or 6 December. Speculaas is very old, the spices used date from medieval times.
The name seems to come from the Latin speculum (mirror, the biscuits had the carved figure of the mould in mirror image). Old wooden biscuit moulds show biblical scenes, historical events, ships, windmills, mermaids, and of course images of Saint Nicholas with the small children he had saved according to the legend. Single youngsters could receive a ‘vrijer’ (male admirer/lover) or ‘vrijster’ (female admirer/lover). According to some this could be considered as a marriage proposal from the giver. These large speculaas dolls (a bit like ‘gingerbread men’) were often decorated with coloured icing, silver pills and even leaf gold.
The speculaas biscuits from before, say, 1850, were made with a very hard dough containing rye flour and honey. These biscuits were so hard they could only be eaten if they were dissolved into a sweet (and tasty) porridge.
In my youth we used to to eat small speculaas biscuits on richly buttered white sandwiches as a special treat.

In the Netherlands it is easy to buy speculaas cookies, especially during Autumn and Winter. People elsewhere will probably have to bake their own cookies, and even for the Dutch it may be fun to make them at home. They are easily prepared, and children will love helping with this. 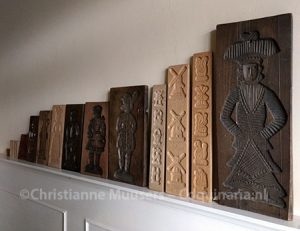 On the right is a picture of my ‘collection’ of speculaas moulds. Some are antique, others are modern. For maintenance, it best to rub them regularly with oil to prevent the wood from drying out and cracking.

In 1967 there was an exhibition of old speculaas moulds in Leeuwarden. The information below is from the catalogue that accompanied the exhibition, the Bakkersprentenboek (Baker’s picture book, see bibliography). The introductory text was written by ‘the first Dutch television cook’ Edmund Nicholas, of whom I have published a recipe on this page.

Traditionally the moulds were cut from the wood of regular farm-trees: apple, pear, cherry, common lime or linden and elm trees. Few of these moulds survived for long: they were beaten forcibly on the worktop to remove the formed dough. The original dough of rye flour, honey and dark sugar was hard to work, but the details of the figurines remained sharp after baking. Later rising agents were added, wich made work easier, but the definition of the figurines became less clear. The moulds were cut by bakers themselves, or by professional cutters who were often also made and repaired spinning wheels. The images on the speculaas moulds were varied: in addition to the ones already mentioned above, saints could also be depicted, as well as mythical creatures, occupations and political figures and symbols. Regrettably the Bakkersprentenboek did not provide the speculaas moulds with information on dating.

On this page is the recipe for simple speculaas cookies. On Coquinaria are more recipes concerning speculaas: Speculaas muffins and Speculaas stuffed with almond spice. And with almond spice there is also the recipe for traditional Banquet letter.
For about 2 pounds Speculaas; preparation in advance 10 minutes + 1 day rest; preparation 40 minutes + cooling. 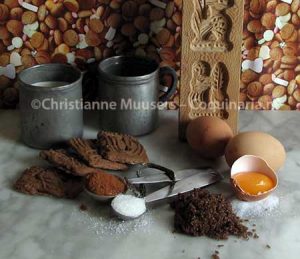 Mix flour with sugar, salt, baking powder, soda and spices (don’t forget the salt, otherwise the speculaas will be bland). Add the butter, cut it with two knives to little chunks the size of peanuts. Add almonds (optional) and lemon peel, and as much egg and cream as necessary to obtain a firm dough. Place the dough in a bowl, cover, and let it rest, preferably a whole night, in the refrigerator.

With this dough you can make small bisuits, called speculaasjes. To roll the dough out, the dough must be taken out of the refrigerator well in advance, because otherwise it will be too firm because of the butter in it. Once the dough is rolled out, you can use either a cookie cutter, or real Dutch wooden speculaas moulds. If you use these, be sure to sprinkle the mould liberally with flour every time you press fresh dough into it.
Tap the mould upside down on the worktop to free the speculaas dough. Cut the sides to make a neat form, and place the biscuits on a greased baking sheet.
Bake the biscuits in the preheated oven (175 °C/350 °F) until done (about 20 minutes). Let the biscuits cool on a cake rack.

The cookies will become hard and crispy when they have cooled. Keep them in a airtight container.

In the Netherlands you can buy the spices for speculaas premixed. I doubt whether that is the case elsewhere in the world. So here you have a mixture to make yourself: Take cinnamon, nutmeg, cloves, white pepper, ginger and cardamom (everything powdered) in a ratio of 8:2:2:1:1:1 (whether you use grams, teaspoons or tablespoons, the proportions must be the same). The used spices betray the age of the recipe for speculaas: this combination of spices can be found in many fifteenth century recipes.