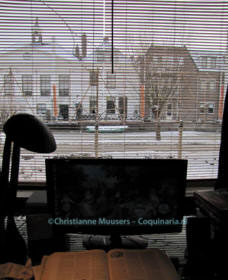 While I am writing this (2 December 2010) it’s freezing cold outside, the canal in front of my house is frozen, and everything is covered with a layer of snow. Apparently I live near a salt depot, for in the last half hour I have counted five gritting lorries loaded with salt to sprinkle on the slippery roads. So of course I developed an instant fancy for Stamppot Boerenkool. This dish of mashed potatoes and kale, served with rookworst, is very popular in the Netherlands during the winter season. As with all traditional dishes, there are many recipes for this dish. On this page you’ll find mine.

Not so long ago, when most households always had a skillet with gravy from the day before, stamppot was served as a little volcano, with well for the gravy. People still do this, but now they often use industrial gravy from a package. I don’t use gravy at all, but butter or lard, and bacon and onions to get a juicy stamppot. However, if you happen to have some leftover old-fashioned gravy, try it with this dish. The Dutch have enjoyed this dish for centuries, as this recipe from the eighteenth century proves.

I have left stamppot and rookworst untranslated, because there are no equivalents for these words in English. Stamppot is not the same as a stew, and rookworst is not just any smoked sausage. The recipe below explains what a stamppot is, under the explained ingredients you can see exactly what a Dutch rookworst is. If you can’t get rookworst, use Frankfurters instead, although they are not really the same.

Stamppot is nourishing, and easily prepared in large quantities. The only problem is reheating it. It is best to serve this dish at once. If that is not possible, divide the stamppot in servings and reheat these separately in the microwave. When you reheat stamppot in an oven, it tends to dry out. Leftovers can be kept in the refrigerator for several days, or in the freezer for several months. Freeze in quantities for 1 person. Below the recipe there’s a tip for using leftovers.
Casserole for 2 very hungry persons to 4 persons who are slightly hungry; preparation in advance 15 minutes; preparation 25 minutes. 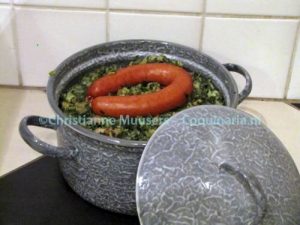 Peel the potatoes and cut them in two to six pieces, depending on the size of the potatoes.

Cooking the potatoes and kale – Peel the potatoes, cut large ones in half, so that all potatoes are about the same size. Put in a large pan and add as much water as needed to just submerge the potatoes. Add the stock cube. Put the kale on top of the potatoes, and the rookworst on top of the kale. Cover with a lid, bring to the boil and then lower the fire. Let simmer for about twenty minutes, Prick the potatoes with a fork to see if they’re done.

Braising bacon and onions – As soon as potatoes and kale are cooking, start with the bacon and onions. Heat the bacon in a thick-bottomed skillet (I use a cast-iron one). You don’t need to add any fat, but a spoonful of lard of butter won’t hurt. When the bacon fat has melted, add the onions and lower the heat. Stir occasionally, and keep covered. Braise for fifteen minutes. The onions will caramelize, the bacon won’t burn. If you’d like to have browner onions and crispier bacon, remove the cover for the last minutes and raise the heat.

Mashing potatoes and kale – When the potatoes are done, remove the rookworst. Pour off the liquid, but retain it. Take a good masher and mash potatoes and kale without turning it into a purée. Now add as much of the cooking liquid as you need to get a savoury consistency, Mix in bacon and onions, lots of black pepper, a dollop of lard or butter, and the vinegar. Now taste to see if any extra salt is needed (bacon and stock cube also contain salt). You could also let everyone add salt to their own plate.

Stamppot is served piping hot, with the rookworst on top, whole or in thick slices. If you have real gravy, serve that along with the stamppot. My Dutch taste panel however liked this stamppot just as well without the gravy.

Make a purée of your leftover stamppot (without the rookworst), and from these into sticks or little balls. Bread these like kroketten or bitterballen, and deep-fry them. You can also freeze the sticks and balls (before breading). Dip them after frying in mustard or … apple sauce.

Use a vegetable stock cube, more onions, and no bacon or lard. 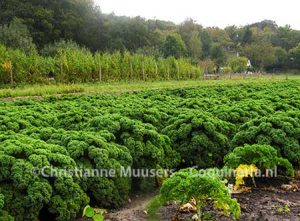 Cabbage with large, curly dark green leaves. Scientific name is Brassica oleraceavar acephala. Many people don’t even know what the plant looks like, all they ever see is the frozen or chopped cellophaned version. According to TOCF (see bibliography), kale was the ordinary green stuff for country people until the late Middle Ages, when the headed cabbages gained popularity. Kale was very valuable because of its resistance to frost. In the depth of winter, when all land was bare, you could still harvest kale.

This is pork fat, heated and strained. Nowadays lard is not as popular as it used to be, because of the high percentage of saturated fat. But, just as one can occasionally eat an oversweet cake with heaps of whipped cream, one can prepare a dish with lard once in a while. Lard was widely used as cooking fat in the past, and modern Chinese cuisine still uses lard a lot.
To make lard: Take a pound of fresh or salted pork fat. Chop it in chunks, put in a skillet without adding anything, heat at low temperature, stir occasionally. After 30 to 45 minutes you’ll have cracklings and lard. Cracklings are a treat for those people who like them (I do!). Dogs and cats also love cracklings, but give it sparingly if at all, because of the fat, and the salt (if you used cured fat). During the heating of the pork fat you can add herbs or spices like bay leaf, mace, clove, pepper. Strain the lard, put in a jar and keep in the refrigerator (keeps for months).
Pastry dough prepared with lard in stead of butter tastes great. An added bonus is that your hands will become incredibly smooth when kneading the dough, very good for dry skin (and your dog/cat will surely love to be petted by you afterwards!). 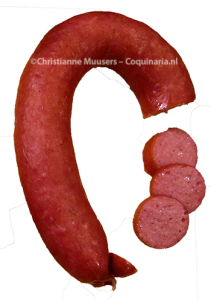 Literally rookworst means ‘smoked sausage’, but not just any smoked sausage is a Dutch rookworst. It can be made of 100% pork, but there’s also rookworst from beef (which I find less tasty). Pure pork rookworst is made from one part lean pork and two parts pork fat (from belly, back and jaw), with salt, very little sugar and white pepper. Then the meat is encased in natural gut, and the sausages are tied with their ends together (see picture). After drying for twelve hours they are cold-smoked for 24 to 36 hours. At least, that is how they used to be made. Today most rookworst is mass produced, the sausage encasing is artificial, as is the smoke taste, which comes from artificial flavouring. Pity. Not that the Dutch people seem to care, they buy Unox rookworst en masse at the supermarkets, in stead of supporting the few butchers that still make their own rookworst.