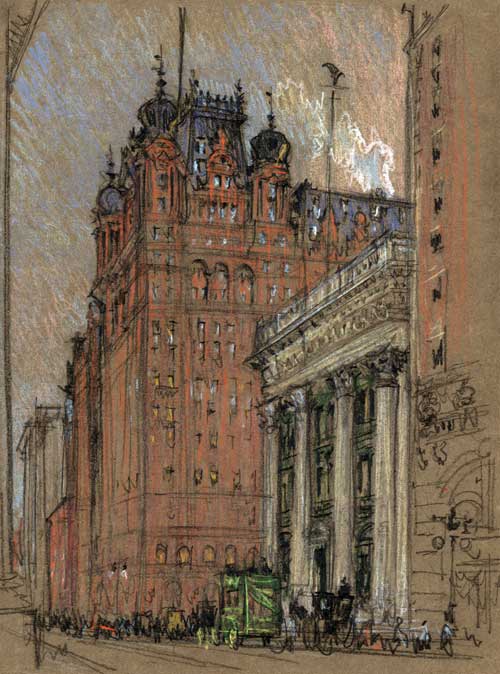 An American classic from the nineteenth century

Until the beginning of the nineteenth century, cooks and maître d’s who served at the courts of kings and nobles set the tone in culinary developments. But this all changed with the rise of restaurants and -later- hotels. Who today knows the men or women who cook for Beatrix, Elizabeth II, Juan Carlos I, Obama? And even if they are known, they won’t be considered trend setters. Escoffier, Bocuse, Adrià cook(ed) in restaurants or hotel-restaurants.

The Cook Book by “Oscar” of the Waldorf

The Waldorf Salad was created in 1893, apparently not by the cook of the Waldorf, but by maître d’ Oscar Tschirky. In 1896 he published The Cook Book by “Oscar” of the Waldorf, which can be consulted online. He concerns himself with the organisation in the kitchen, and the times of the year in which specific fish, poultry, meat, vegetables and fruit were at their best. The theory of the menu is also treated by Tschirky, especially that of  dinner, because that meal “is of the greatest importance”. According to Tschirky, Waldorf Salad would have been served near the end of the menu, together with other cold dishes, after roasted game or poultry. If no other cold dishes were served, the salad was the accompaniment of the roast. Before eaters had arrived at the game course, they had already stowed a lot of dishes: first oysters when in season (only in such months of the year in which the letter “r” occurs), then soup, followed by hot and cold hors d’oeuvres (timbales, bouchées, olives, radishes), a fish course with potatos or cucumber salad, one or two entrees (terrapin, oysters (again!), crab, lobster, shrimp), then roasts (veal, lamb, beef, antilope) with vegetables, a little punch or sherbet, then finally the game (or turkey, capon, duck) after which the salads and other cold dishes would be served. I can’t imagine still wanting to eat, but after the salad course followed yet another course with hot and cold sweet dishes, after which the actual dessert came (cheese, fresh fruit, bonbons, ice cream). Coffee is “the last article on the menu”. However, if ladies are present, the menu should be lighter and “fancier”.

The simple Waldorf Salad was an immediate hit. Escoffier already incorporated the recipe in 1902 in his Guide culinaire, to wich he added “lobes de noix fraîches épluchés (dans le saison)” [“fresh peeled walnut halves (in season)”]. The walnut saeson on the Northern hemisphere is september/october. Later there appear recipes with raisins, chicken fillets, and in the seventies of the last century even canned mandarin or pineapple is added, while the celeriac is not fresh and uncooked, but from a glass jar, or replaced by celery stalks. The originally Waldorf Salad is meatless, but the version with white chicken meat also became very popular. Waldorf Salad is served as a first course in modern menus, or as part of a cold buffet.
See the recipe for Salmon Salad for the history of mayonnaise.

From The Cook Book by Oscar of the Waldorf (edition p.433, see bibliography).

Tschirky does not mention what kind of apples were to be used, sweet or tart. I like tart apples, so I used Granny Smith for this salad. The celeriac should be diced just like the apples, but I prefer it grated. I also added white chicken meat and walnuts, which are frequently mentioned in later versions. That specific walnut crunch is -to me- an essential part of the ‘Waldorf Salad Experience’. To be completely in period you simply limit the ingredients to celeriac, apple and mayonnaise. The following amounts are for a 1½ pound salad.
First course, side dish or buffet dish for 4 to 12 persons; preparation in advance 10 minutes; preparation 15 minutes. 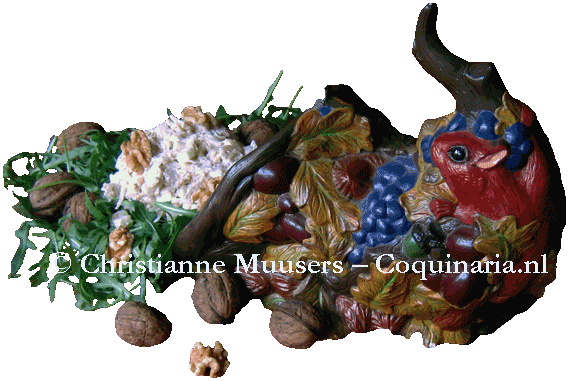 Prepare the mayonnaise according to Tschirky: whisk everything but oil and vinegar in a bowl. Then pour in olive oil in a drizzle, keep whisking. Stop adding oil when the consistence is to your satisfaction. If you use a blender to prepare the mayonnaise, then take whole eggs instead of just yolks. If the mayonnaise turned out too thick, add a little vinegar at the last moment.
Often a little vinegar is mixed with the yolk before adding oil, that is the modern way.

Dice the apple in small cubes. Do not grate, it will not be firm enough in texture, even compared to grated celeriac.
Slice the outer skin off the celeriac, and dice it in small cubes, or grate on a coarse grater.  Combine apple with celeriac and sprinkle with lemon juice to prevent discoloration. Add chopped walnuts.
If you want to use meat in the salad, cut it very finely, and mix in with the rest.
Add as much mayonnaise as you like. Don’t add the whole cup at once, too much mayonaise and the salade will taste less good. Leftover-mayonnaise can be kept in the refrigerator for some days.

On lettuce, or anything that strikes your fancy. Because of the pallor of the salad, it would look beautiful on a black plate. Or serve it ton sur ton, on a white plate. Like on the picture above looks adventurous, but is not very practical.

Short for maître d’hôtel. In Oldfrench this was spelled as maistre d’ hostel (which explains the ^ on the i and o). The French word Hôtel means more than just a hotel. Hôtel meant ‘a place to stay’ in general, and could also mean the inhabitants of the place, especially those of a noble household (estre de l’hostel meant being a member of the court of a nobleman). Several French books from the seventeenth century (Le maistre d’hostel in 1659, La maison reglée from Audigier in 1692) desribe the tasks of a maître d’. He was charged with the organisation and coordination of all tasks of the personnel of kitchen and office (the ‘cold kitchen’ where confectionery was prepared). He supervised the use of all kitchenware and tableware, planned the menus, purchased all food and fuel, and made sure the serving of the means went without a hitch. He may have been active in the kitchen, but he was not a cook.
Today the maître d’ is the façade of the restaurant: he/she receives the guests and guides them to their table, he advises in the choice of dishes and wine, and is the link between kitchen and dining area. He also prepares some dishes at the table, like salads, or boning fish.

Ground yellow mustard seeds. Add water or (wine)vinegar and you’ve prepared your own mustard. But mustard powder can also be used as a spice in dishes, the same way as, say, ground coriandre seeds. Colman’s is an Engtlish brand that sells ground mustard since 1814..

Salt spoons are sometimes mentioned in older English and French cookery books. The salt spoon or cuillère à sel is 1.25 ml or about ¼ teaspoon.