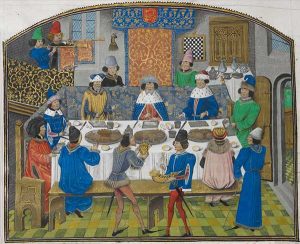 An English recipe from the fifteenth century

A recipe from an English manuscript from the middle of the fifteenth century, Harleian 4016 from the library of the British Museum. The cookbook opens with the menu of a banquet that was served to king Richard II and the Duke of Lancaster on September 23 1387 in the palace of the bishop at Durham in London. The second menu in the manuscript is 56 years younger, from a banquet in honour of the installation of John Stafford as archbishop of Canterbury in 1443.
The picture on the right is another meal of Richard II, with the dukes of York, Gloucester and Ireland around 1386 (from the Recueil des croniques et anchiennes istories de la Grant Bretaigne by Jean de Wavrin, on Gallica several versions, including the scanned original manuscript with this miniature).

Both meals consisted of three courses. There are nearly sixty years between the two meals, but little had changed during that period. During the first course roast fowl was served, along with venison and frumenty, for the second course more roast fowl and meat was served, with pottages (thick nourishing soups), and in 1443 a bruet (a thick ragout-like dish). Surely sauces were also served to accompany the roast fowl and meat, but these aren’t mentioned in the menus. The third course shows some change. There were more sweet dishes in 1443 than in 1387, but both meals also served roast small birds during ‘dessert’. Mallard was served in the first or second course. The recipe is for onion sauce, and it is specified that this sauce is for mallard. Another recipe from this manuscript is Pyke in galantyne.

The art of carving 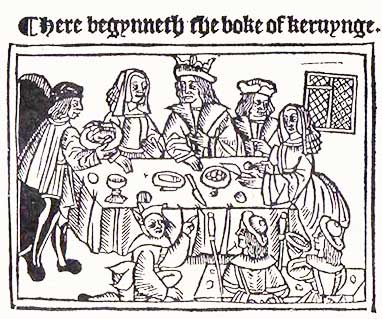 Roast fowl was presented whole, it had to be carved prior to serving. That could be done at the side board by a squire, or in smaller company by the host. It was expected of a gentleman that he knew how to expertly dissect the presented food. One of the texts that teaches a young man exactly how to do that is The boke of keruyinge of Wynkyn de Worde (see bibliography). This was printed in 1508, but the original text was written earlier, between 1430 and 1440. The description on carving mallard: “Goose, tele, mallarde & swanne: reyse the legges than the wynges, laye the body in the myddes or in an other platter, the wynges in the myddes & the legges after; lay the brawne bytwene the legges & the wynges in the plater.” (in the translation of Peter Brears: Goose, teal, mallard and swan: take off the legs, then the wings; lay the body in the middle or in another platter, the wings in the middle and the legs behind; lay the meat between the wings and the wings in the platter.)

From the introduction to the edition of this manuscript (together with another, Harleian 279 from about 1430) from 1888 by Thomas Austin it is clear how scholars regarded the medieval culinary arts: “Many of the Recipes that are given here would astonish a modern Cook. Our forefathers, possibly from having stronger stomachs, fortified by outdoor life, evidently liked their dishes strongly seasoned and piquant […].” This was written in the glory days of the famous English breakfast (with omelettes, bacon, kippers, beans in tomato sauce, fried onions, fried toast, and so on), and heavily spiced doishes as mulligatawny, khedgeree and curries that were introduced by returned colonials. The pot and the kettle?

The recipe comes from Harleian ms 4016 (edition p.77, see bibliography). About the letter þ: this is the medieval English symbol for the ‘th’ sound, the thorn. You can find it on your key board by using the combination ctrl-alt-t. The same manuscripts that were used by Austin have been used for the edition by Cindy Renfrow, with a translation in modern English that I have taken the liberty to reproduce below. (see bibliography).

Pikkyll pour le Mallard.
Take oynons, and hewe hem small, and fry hem in fressh grece, and caste hem into a potte. And fressh broth of beef, Wyne, & powder of peper, canel, and dropping of the mallard. And lete hem boile togidur awhile; And take hit fro þe fyre, and caste thereto mustard a litul, And pouder of ginger, And lete hit boile no more, and salt hit, And serue hit forthe with þe Mallard.
Pickle for the Mallard.
Take onions, and chop them small. Fry them in fresh grease, and cast them into a pot, [Add] fresh broth of beef, wine and ground pepper, cinnamon, and drippings of the mallard. Let them boil together for a while. Take it from the fire, and add a little mustardto it, and ginger powder. Let it boil no more, and salt it. Serve it with the Mallard.

The recipe is just for the sauce, not a word on how the duck should be prepared. It’s fairly safe to assume that it would have been roasted, since you need the drippings of the mallard.
Don’t use stock cubes or other commercially produced broth, but rather make your own. Here you can find recipes for medieval beef stock and modern beef stock.
On the picture you see not a mallard, but a pheasant. This dish had to be photographed for a booklet, and at that moment all I had was this pheasant. I hope to remember to make a picture next time I make this dish, with a mallard.
Main course for 4 persons; preparation in advance 15 minutes; preparation 1 hour. 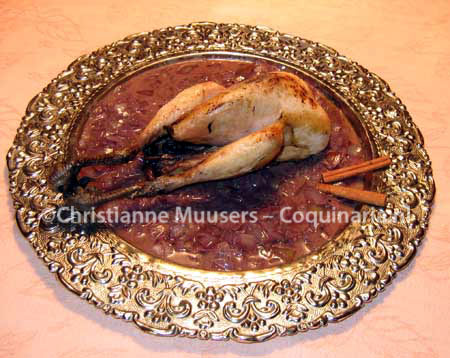 2 wild ducks (mallards), in the picture pheasants
4 to 8 slices of lard

Prepare the ducks. If you choose to use a roasting tin, or roast them on a gridiron, lay them on their back, and drape two slices of bacon over the breast. If the birds are roasted on a spit, bind four slices of bacon around them and use kitchen twine to keep them in place. Don’t forget to put a dripping pan under the mallards to collect the drippings.
You can already fry the diced lard for the sauce. The cracklings are delicious to nibble, but very salty. Don’t feed them to your pets, however cutely they beg for it.

Roast the mallards. To get the typically smokey flavour of a charcoal fire you should use a barbecue, but take care that the drippings do not fall on the coals, because the resulting flames will burn the mallards instead of roasting them. Besides, you’ll need the drippings for the sauce. You can also roast the ducks in front of a charcoal fire, as they did in the Middle Ages. The lechefrite or dripping pan was a standard utensil in medieval kitchens.
But you can also roast the birds the modern way, in the oven, at a temperature of 175 °C/350 °F for 45 to 60 minutes (depending on whether using a convection or conventional oven. Check if the mallards are done, because times vary according to the oven you have, and the birds. They should have a core temperature of 75 to 80 °C/165 to 175 °F.
Keep the ducks warm while you make the sauce by enveloping them in crinkled kitchen foil (shiny side to the inside).
Prepare the sauce. Fry the onions in the melted lard, add broth, wine and drippings, and pepper and cinnamon. Simmer on a slow fire for fifteen minutes, then finish to taste with mustard(seeds), ginger and salt.

The birds were first presented whole, and then cut at the table or the side table: first the legs and wings are cut off, then the breastmeat is lifted from the carcass and cut in sizelable pieces or slices. The carcass is then placed in the middle of a dish, the sliced breastmeat arranged next to it with the wings, the legs are placed behind. By the time the duck was cut and arranged the meat wouldn’t be piping hot anymore, which is a good thing if you eat with your fingers.
The sauce can be served in separate sauce boats or poured in the dish on which the mallard is served.

This has always been a popular condiment. Mustard is made from the seeds of several species of the brassica-family (cabbage). From some varieties the leaves can be eaten, and the seeds not only serve to make mustard, but can also be pressed to yield a culinary oil, or distilled to make a medicinal oil. There are black, white and brown mustard seeds (from Brassica nigra, Sinapis alba en Brassica juncea), each with their own specific properties. The first to are indigenous to Europe, the brown mustard has its origins in Asia. Make your own French mustard.

Wild ducks are smaller than the white domesticated ones, they weigh around 2 pounds, tame ducks weigh 5 to 8 pounds. Mallards also have a much lower percentage of fat. The hunting season is from august to february, but mallards are at their best in september, before the cold sets in. However, wild duck can be bought frozen all year. Always check your mallard for pellets before preparing it.
In the Netherlands you can also buy kooieenden. According to my lexicon these are decoy ducks in English. See decoy in Wikipedia. Ducks that are caught in a decoy are not shot but killed by breaking their neck, so they won’t have pellets and contusions.

A medieval recipe for roasted mallard with onion sauce
An English recipe from the fifteenth century for a spicy onion sauce to accompany mallard or other wild fowl.
© Author Christianne Muusers