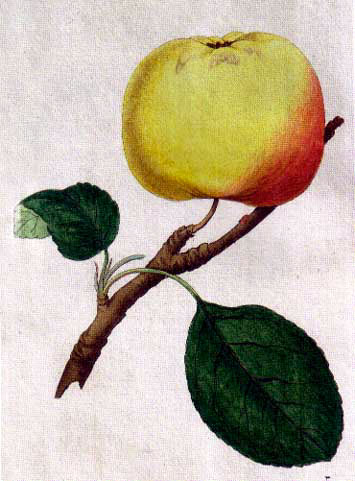 In the Netherlands apple fritters are traditional food on New Year’s Eve. I have chosen an English recipe from the fifteenth century to see how it would have tasted in the past. It could just as well have been any other medieval cookery book, as apple fritters were popular food in the Middle Ages.

Fritters on the menu

Apples are the fruit that is most popular and eaten most often in our regions. There are thousands of different varieties, but not every variety can be bought at the store. Some varieties are only known locally, others have sunk into oblivion, and many varieties are simply not commercially interesting enough because they don’t yield enough fruit or are too vulnerable to various diseases.
Originally apples were small and sour, with a large core. In antiquity apples and quinces were not yet looked upon as different fruit. It was all ‘apples’, including Paris’ apple that was the indirect cause of the Trojan war, and the forbidden fruit in the garden of Eden was also likely to have been a quince.
At the end of the Middle Ages there were already several apple varieties. Alan Davidson mentions for England the Costard (a large kitchen apple) and the Pearmain (green and red coloured apple) that were both already known in the thirteenth century. Other medieval varieties were the Nonpareil, White Joaneting (very early, yellow apple) and Royal Russet (kitchen and eating apple). These old varieties are still grown by tree-nurseries that are specialized in ancient fruit varieties.
When the art of grafting was reintroduced in the sixteenth century (the Romans knew how to do it, but the knowledge dissappeared after the fall of the Roman Empire) there was an explosion of new varieties of apples and other tree-fruit. Pippins and Reinettes are some of those new apples.
About the apple on the picture (taken from Der teutsche Obstgärtner uit 1795): this one of the oldest European apples, the ‘Winter- Borsdorfer Apfel’, a variety of the Edelborsdorfer apples. The Edelborsdorfer is already mentioned in a charter dating from 1175 A.D.  This was a popular variety in Germany and Austria. The picture is not upside down, as you can see from the shadow on the twig. I haven’t the foggiest notion of why the artist has pictured the apple in this strange, gravity-defying way.

This is not the first time this specific recipe has been published (see bibliography). No wonder, because it is easy to make and the taste is not too exotic, so even less dextrous and adventurous cooks will feel tempted to try it.
Fritters appeared regularly on the medieval banquet table. There were sweet and savoury fritters (like ms Harleian 279, recept 2.48, with fish, figs and raisins).
With Lent approaching, it may be good to know that these apple fritters are implicitly meant for the forty day fast-period: no milk, eggs or animal fat is used, and the fritters are baked in oil. The recipe immediately preceding this one is for “Fretoure owt of lente”, where the apples are dipped in a batter with milk and eggs. Another recipe for Lent on this site: Fake Fish.

The original recipe is from ms Harleian 279, recipe 2.54 (edition Renfrow pp.44/45, see bibliography). More about this manuscript can be found in the recipe for Strawberry Pudding. This time I have decided to use the English characters thorn þ) and yough (³). But if anyone has trouble loading these characters on their computers I will replace them by resp. th and y. Another recipe from this manuscript: ‘hedgehog’.

Fretoure.
Take whete floure, Ale 3est, Safroun, & Salt, & bete alle to-gederys as þikke as þou schuldyst make oþer bature in fleyssche tyme; & þan take fayre Applys, & kut hem in maner of Fretourys, & wete hem in þe bature vp on downne, & frye hem in fayre Oyle, & caste hem in a dyssche; & caste Sugre þer-on, & serue forth.
Fritters.
Take wheat flour, ale yeast (or ale and yeast?), saffron and salt. Beat it all together as thick as you would make other batter on meat days. Then take good apples and cut them in the manner of frtitters. Dip them in the batter up and down and bake them in good oil. Lay them on a dish, sprinkle sugar on them, and serve them.

To begin with, I have had quite a lot of trouble determining what ale I should use for the batter. Modern beer is mostly pasteurized and contains not enough live yeast to let the batter rise. So you’ll have to add some extra yeast. Whatever beer you choose, use a top-fermenting beer, if possible unpasteurized. What beer or ale is available where you live is impossible for me to say. You’ll have to experiment a little.
When I made these apple fritters for Sylvester 2016, I used apple cidre instead of ale or beer, with very good results. Try it!
Voor 12 tot 16 appelflappen van hele schijven appel; voorbereiding 20 minuten + rijstijd; bereiding 30 minuten. 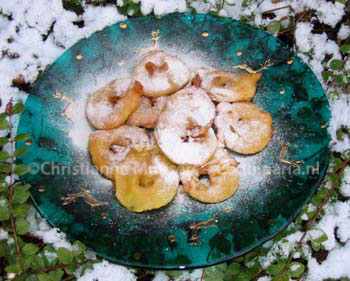 Make the batter: heat a half decilitre of the beer to lukewarm (in a small pan on the stove, I doubt yeast will survive microwaves), sprinkle the yeast in it and let stand for fifteen minutes. Heat one tablespoon of beer to hot in the microwave and bruise the saffron with a small spoon in this beer.
Now throw together all the beer (including the beer with yeast and saffron), flour, salt and sugar, mix to a smooth, thick batter. Set aside in a warm place to rise for.30 to 60 minutes. 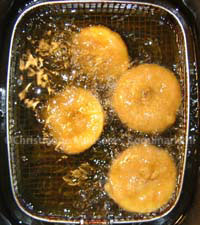 Peel and cut the apples just before cooking, to keep discolouration to a minimum. Peel the apples, remove the core, cut the apples in slices or chunks.
Heat the oil to 180 °C/355 °F. Dip the apple pieces in the batter and fry them a few at a time until the are a nice golden-brown, a couple of minutes. Tip them over once. Drain the apple fritters on kitchen towels, keep warm in the oven (100 °C/220 °F) until the whole batch is fried.
If necessary you can reheat the apple fritters in the oven at 150 °C/300 °F, on the oven rack in one layer.

Warm, sprinkled with icing sugar. If you want to you can mix cinnamon with the sugar, that was done quite often in the Middle Ages too.

Ale and beer in the Middle Ages 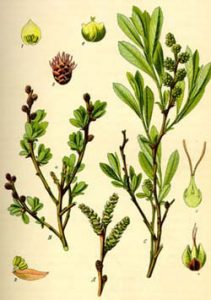 English ale was originally the same as all medieval beer: top-fermenting, and instead of hop gruit was used, a mix of sweet gale (Myrica gale, see picture) and other herbs as rosemary and sage. Hop makes beer keep longer, and adds the more or less bitter taste to beer. The ale could be sweet or sour, depending on the compostion of the gruit and the brewing. Medieval beers weren’t as bubbly as the modern ones either, the carbon dioxide escaped for the most part during fermentation.
Hop was introduced to the English isles in the fifteenth century by the Dutch, who brewed hopped beer since the beginning of the fourteenth century. This is not to say that from then on all English ales were hopped, people did not trust it, thinking that the hop was used to disguise deficiencies, and not linking the taste. Ale came to mean beer brewed with gruit, beer was brewed with hop. From the sixteenth century on ale is also made with hop. The term ale now refers to a top-fermenting beer, whereas lager is a bottom-fermenting beer.
Since manuscript Harleian 279 dates from about 1430, I think the ale used in the recipe was a top-fermenting beer made with gruit instead of hop.
Ale was what everybody drank in the Middle Ages the whole day long. Wine was expensive, and coffee and tea were still unknown. Because the water used in brewing had boiled during the process drinking beer was safer than drinking water. I have not been able to find information on how much alcohol these ales contained. Wine was diluted with water, to drink unadulterated wine was the sign of an excessive drinker. Since ale was drunk by most people, young and old, throughout the day I assume that these ales were either not very alcoholic or were diluted with water as well.
I haven’t succeeded yet in finding an ale made with gruit instead of hop. The best I could find was a top-fermenting, unpasteurized beer with an alcohol-percentage of about 6%. I used dubbel Westmalle and added a tablespoon of sugar to the batter to compensate for the bitterness. The fritters were excellent, but I could still taste the hop.

Beer is something I generally don’t drink, so I am an absolute amateur on the subject. Several people have helped me trying to determine what beer I could use, a big thank you to all of them. Edit: Thanks tosomeone on a Dutch forum I now know where to find Dutch Gruit Ale: Jopen Koyt. That ale is made from a recipe from 1407, with gruit with sweet gale, but also lightly hopped.

Animal fat and butter were often used in the medieval kitchen, but oil was also important and not just around the Mediterranean. The oil used was often olive oil (even in fifteenth century England, in  ms Harleian 279, 1.135, for “Applade Ryalle”, an apple sauce with beef stock and grease on meat days, or almond milk and oil on fishdays, the oil was olive oil), but other vegetable oils were also in use, like walnut oil, and rape oil. (colza-oil). Rape oil can still be bought, it is also an ingredient for some margarines.
In Middle-Dutch manuscripts there is also mention of olive oil (UB Gent 476, recipe 142) and rape oil (KA Gent 15, several recipes in the three culinary volumes of the convolute, like scrambled eggs with pike roe during Lent). But most of the recipes just mention oil without furhter specifications.
To be honest with you: I haven’t a clue what oil was used to fry the fritters. So I just chose a vegetable oil with a neutral taste.