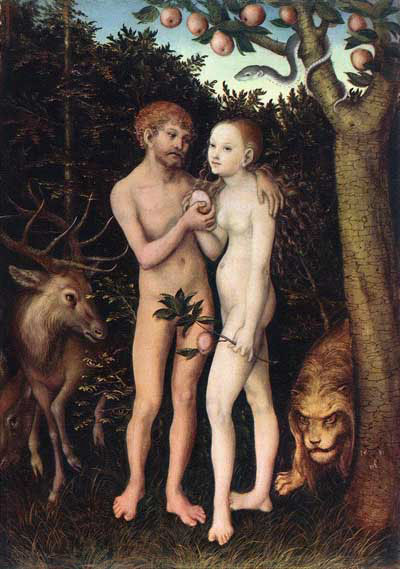 Apple sauce is a medieval relic. It was a popular dish, considering the many recipes for apple sauce that can be found in medieval cookbooks all over Europe. Some of those recipes are rather unusual, like the following recipe for apple sauce with … fish liver! The recipe’s title is ‘appelmoes in de vastene’ (apple sauce in Lent), so it was meant to be eaten between carnival and Easter. The people had to abstain from any meat and dairy products during Lent. This meant that the daily fare during that period was different from other times in the year. More information on Lent and its consequences can be found at the recipe for Fake Fish.

From a dietary point of view this apple sauce is almost obscenely healthy: sour apples, no sugar, lots of omega-3 fatty acids (in the fish liver). Do not be dissuaded by the idea of using fish in apple sauce, the taste is very subtle. Serve this dish without explaining it first, to let your guests form an unprejudiced opinion.
However, if this apple sauce is too healthy for your decadent palate, here is an extra recipe that may be easier to ‘digest’.

Today apple sauce is still important in the daily diet of many. There are countless households in which the bowl with apple sauce (more often from a jar than home made) is as common a fixture on the table as the saltcellar.
I never fed my daughter commercial baby food, which may be the cause of her escape from apple sauce addiction. Because industrial baby meals are often brought to taste with … apple sauce!
Many years ago we had a young electrician in the house doing mysterious things with the wiring. He told me that he had been on vacation to Spain. The weather was great, but the first few days he couldn’t enjoy his holiday to the max. The hotel he stayed in did not serve apple sauce with dinner.
Once he had discovered that apple sauce was called compota de manzana in Spanish and had acquired his own little dish of apple sauce every night, his holiday at the Costa del Sol was perfect.

Which apples can be used for apple sauce? If you ask me, any apple will do. You’ll get a different apple sauce with different kinds of apples. Just experiment to find out which apples suits your taste. Some information on old apple varieties can be found at the recipe for medieval apple fritters.

The recipe is taken from the first Middle Dutch cookbook that has been edited in ‘modern’ times, in 1872, by the Flemish C.A. Serrure. The manuscript can be found in the university library of Gent, sign. UB Gent 1035. Serrure was not inspired when he chose the title for this manuscript: the edition bears the title ‘Keukenboek’ (‘kitchen book’). The manuscript itself however presents a much nicer title: “Desen bouc leert wel ende edelike spijse te bereedene tetene also als hier naer volcht” (This book teaches how to prepare [and] to eat good and noble food as follows). That is why I use the title Wel ende edelike spijse to refer to this manuscript. More about this manuscript from the late fifteenth century. (editions).

It is very difficult -at least in the Netherlands- to buy fresh, raw liver of cod or haddock. A good alternative is canned haddock or cod liver. Because the liver is already cooked, it is added at the end.
The almond milk on the contrary is originally added at the end, but I have chosen to cook the ground almonds with the apples, and leave them in. I like the crunch.
For about a pound apple sauce as side dish; preparation in advance 5 minutes; preparation 25 minutes. 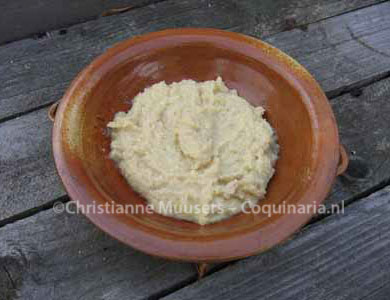 Peel and core the apples, cut them in coarse chunks. Put them immediately in a pan with water. Cook the apples until done, in ten to twenty minutes. Drain them, keep the cooking liquid.
Make almond milk. Bring 1,5 dl of the preserved vooking liquid to the boil and pour over the ground almonds. Stir and then let it rest for about twenty minutes. Then strain the almond milk.
Drain the canned cod or haddock liver. If the liver happens to be conserved with its own oil you can reserve the oil to profit from the omega-3 fatty acids. You could even add it to the apple sauce, but the fish-taste will be more pronounced.

Add almond milk and spices to the cooked an drained apples, and the drained fish liver.
Bring to the boil again, then purée or mash the apples.

Not hot, but tepid or cold.

Take 1 kilo rennets (or Bramleys or Rome Beauties, according to my English dictionary), peeled, cored and chopped, 2 tablespoons sugar, 1 split stick of cinnamon OR some lemon peel (not both at the same time), 1.5 decilitre water. Bring to the boil, cover with a lid, and cook at a low fire until the apples are done (that depends on the size of your chunks, 20 to 30 minutes should suffice). Purée the apples in a blender or through a strainer, or simply mash them with a fork. That’s how I make the most simple apple sauce.

The orange-red stigmas of a crocus. In medieval times (as in modern times) it was used to colour dishes yellow. If you want to have the most effect of the colouring, crush the dried stigmas in a spoonful of hot liquid (water, milk, broth, vinegar, whatever is most fitting for the recipe it is used in).