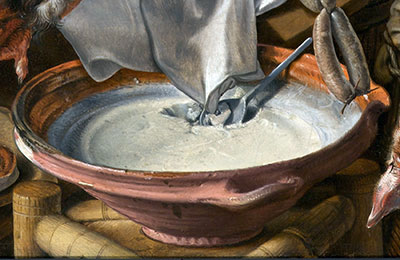 Elsewhere on Coquinaria I have published a recipe for Apple Sauce for Lent. On this page is an English recipe with different versions for meat days and fish days, called apple moys. The Dutch name for apple sauce is appelmoes, so to me (being Dutch) that sounds very familiar.

This apple sauce is special because of the fat that is added to it: suet (or lard) on meat days, and olive oil on fish days. This makes the apple sauce more nourishing than modern-day apple sauce.

An English recipe from the fifteenth century with versions for meat days and fish days. It is called ‘apple moys’, which sounds very much like Dutch ‘appelmoes’. Source: Laud ms 533 (Bodleian Library, edition Austin pp.113/114, see bibliography). Practically the same recipe can be found in Diuersa Servicia (edition Hieatt & Butler p.65, recipe II,17, ‘For to make appulmos’, see bibliography), from the late fourteenth century. The recipe is quite simple.

Apple moys.
nym appeles, seth hem, let hem kele, frete hem thorwe an her syue: cast it on a pot/ & on a fless day cast therto goud fat broth of bef, & white grese, sugur & safron, & on fissh days almand mylke, & oille de oliue, & sugur, & safron: boille hit, messe hit, cast aboue good poudre, & 3if forth
Apple sauce.
Take apples, boil them, let them cool, and rub them through a hair sieve. Put them in a pot, and on a flesh day add to it good fat beef broth and white grease, sugar and saffron and on fish days almond milk, olive oil, sugar and saffron. Boil it, portion it, sprinkle good powder (spices) on top, and give out.

In the recipe the apples are cooked in advance and kept in pots. The apple sauce can then be finished according to whether it is a meat day or a fish day. The bacon is not in the original recipe, which mentions suet (white grease). However, I liked using bacon instead.
Side dish for 6 to 8 persons; preparation in advance 5 minutes; preparatioin 20 minutes. 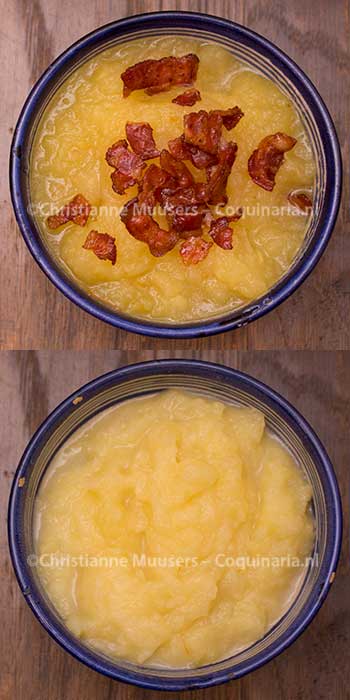 Peel the apples, remove the core, chop them up.

Serve while it is still warm (especially with the meat-day version), and sprinkle powdered ginger and cinnamon over it. If there are any leftover cracklings from making lard, these can be served with the apple sauce.

This cooking fat is hardly ever used in Dutch cuisine. Suet is the firm fat around the kidneys and loins in beef, but there is also suet from veal and mutton or lamb. Its use is more common in the English cuisine, to make mince pies and suet puddings. See also Tallow.