Tompouce is the Dutch version of mille-feuille. It is popular throughout the year, but on some days, it is almost traditional to eat this pastry. And on those days, the tompouce is not decorated with the customary pink glaze, but with orange glaze to emphasize the connection to our royal family or the nation. The tradition of orange glaze has started, according to an article in the Dutch newspaper de Volkskrant, to celebrate the birth of our present king, Willem Alexander on 27 April 1967. Another traditional day for orange tompouce is the National Liberation Day (May 5th), and whenever the Dutch take part in international soccer tournaments. 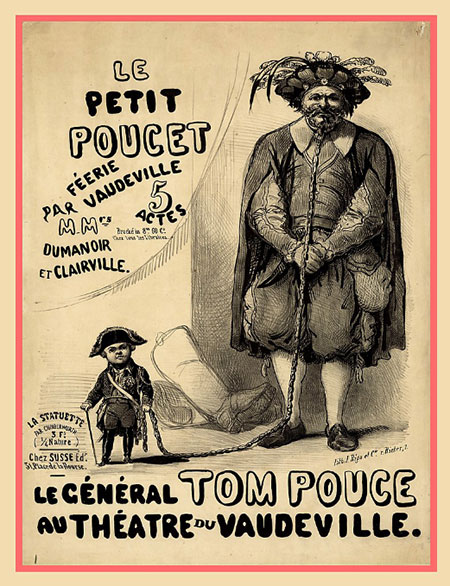 It is not clear why the Dutch call their mille-feuille tompouce. The English Wikipedia as the following information: it was “introduced by an Amsterdam pastry baker and named after Admiral Tom Pouce, the stage name of the Frisian dwarf Jan Hannema”. The Dutch Wikipedia offers the same information. But which Amsterdam baker had the idea, is mentioned nowhere, nor is there a date or year. One may also wonder whether it was specifically Jan Hannema (1839-1878) the name refers to. As can be seen above more little people performed under the name of Tompouce, this is ‘General Tompouce’, an American who played in the popular vaudeville play ‘Le petit poucet’ (Little Tom Thumb). The Dutch cartoon figure Tom Poes (Tom Puss) was named after the Dutch pastry by its creator Maarten Toonder. The comic was first published in March 1941.

The recipe on this page is taken from De banketbakkerij (The pastry baker) by E. H. Klanke Nijhuijs (ca 1885). I have used the second edition from 1889, which is in my possession. This ‘practical and easy handbook for pastry bakers […], confectioners’ etcetera contains many recipes for the sweet, and most often cold kitchen. There are recipes for Tarts, cakes and cookies, syrups, liquors, candy, jelly, ice cream, chocolate, nougat, compotes and preserving fruit. There is also a chapter on food colourings. A little alarming is a recipe for non-toxic green, which implies there is also toxic green food colouring. And that is true, it was ‘copper green’ or copper (II) hydroxide which made peas and pickled gherkins a vibrant green. The safe version of Klanke Nijhuijs consists of ‘Berlin blue‘, tempered with gooseberries, turmeric or saffron. Orange, which is used for the tompouce, is made with carmine red and turmeric, saffron or orlean (yellow).

This is the original recipe from De banketbakkerij, pp. 52-53. See the bibliography for the complete bibliographical description. The translation can be found below the picture. 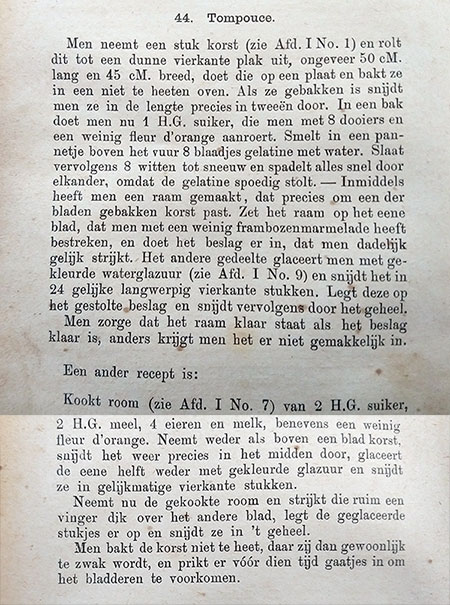 Take a portion of puff pastry (see Ch.1 nr 1) and roll this into a thin square sheet, about 50 cm long and 45 cm wide. Place it on a tray and bake it in an oven that is not too hot. After baking, cut it exactly in half lengthwise. Now put 1 H.G. sugar in a bowl and temper with 8 egg yolks and some orange blossom water. Melt 8 gelatine leaves with water in a pan above the fire. Then beat 8 egg whites into snow and fold everything quickly together, because the gelatine will set soon. — Meanwhile, prepare a frame that fits exactly around one of the baked sheets. Put the frame on one of them that has been coated with some raspberry preserve. Put the pudding on top on make it smooth. The other [baked sheet] must be glazed with coloured water glaze (see Ch.1 nr 9) and cut it in 24 equal oblong and square pieces. Put these on the pudding and then cut them all through.
Take care that the frame is ready when the batter is, because otherwise it will be difficult to fill it.

Boil cream (see Ch.1 nr 7) from 2 H.G. sugar, 2 H.G. meal, 4 eggs and milk, and also some orange blossom water. As [described] above, take a pastry sheet and cut it precisely in half. Glaze one half with coloured glaze and cut into equal squares.
Now take the boiled cream and spread this over the other sheet, the thickness of a finger. Place the glazed pieces on top and cut them through.
The crust must not be baked too hot, because then it will turn too weak, and prick it before baking to prevent rising too high during baking.

For my adaptation I used the second version, without gelatine but with milk and flour. This recipe can be used by vegetarians because there is no gelatine (an animal product). The orange blossom water in the cream is original, but I added it to the glaze. Using lemon-perfumed sugar is also my own addition, one can use regular sugar instead.

To prepare Tompouce, one must work accurately and have good kitchen appliances. For my first attempt I used 4 egg yolks instead of two whole eggs. The resulting custard was too stiff to be used. For my second attempt I used 2 whole eggs but reduced the amount of flour.  This resulted in a custard that was slightly too soft, but it could be used. Then, when the Tompouces were ready, I discovered the importance of cutting the glazed top sheet before placing it on the custard, which is what Klanke-Nijhuijs recommends: the custard will be pushed out of the Tompouce when cutting, even while using an electrical knife. So, on the picture below is the best Tompouce of the lot. Not very professional looking, but very, very tasty!
Makes 8 small pastry; Preparation in advance 30 minutes + cooling; Preparation 20 minutes + drying of the glaze. 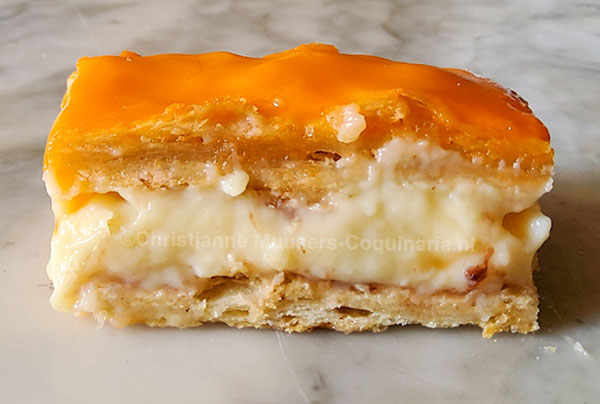 Prepare the custard – Beat the eggs with sugar, orange blossom water, flour, and salt. Bring the milk to the boil and add a spoonful of the hot milk to the eggs, beating well. Keep adding hot milk and beating the eggs until these are warm. Then add them to the milk in the pan and keep stirring until the mixture has thickened into custard. Remove the custard from the hot pan and let it cool in a bowl. Cover with plastic foil to prevent a skin forming.

Preheat the oven to 180 °C/355 °F. Roll out the puff pastry and put it on the baking tray that is greased or covered with a silicone baking sheet. Prick with a fork in many places, to prevent the dough rising too much. Bake for 20 to 25 minutes in the oven until done. The dough must not turn to dark. Let it cool on a cake rack. Cut the sides so that a regular rectangle is formed, cut that in two equal halves. One will be the bottom, the other the upper curst.

Prepare the glaze by adding a few drops of food colouring and orange blossom water and some water if necessary. Coat the top crust with the glaze and let it dry. This can take some time, depending on how much liquid was added. When the glaze has dried, cut it with a sharp knife or electric knife into oblong squares. Place these on the custard in the frame. Remove the frame and cut the pastry between the cuts of the top crust.

At once at room temperature, or from the refrigerator.

Use ready-made puff pastry. Make the filling with custard powder. Make the glaze from confectioners’ sugar, some food colouring and water.

This deep-blue pigment is now more widely known as Prussian blue (see Wikipedia). The pigment was probably discovered by accident in 1706 by the Berlin paint maker Heinrich Diesbach while he was trying to make red pigment. This synthetic pigment was already produced industrially in the eighteenth century, and was widely used: paintings, uniforms of the Prussian army, Delft blue pottery and later also in blueprints. And as food colouring.

I make this at home. It is quite simple: pour boiling water over a lemon. Rinse and dry. Use a zester to peel the lemon without the white. Add this to a container with sugar. Close with a lid and shake or stir regularly for a couple of days. The sugar will acquire a wonderful lemon flavour. Squeeze the lemon and use the juice for other purposes.

Recipe for mille-feuille the Dutch way
This 19th-century recipe for tompouce (Dutch mille-feuille) is not made with vanilla but with orange blossom as flavouring. Use ready-made dough for a quick result, or prepare the puff pastry yourself!
© Author Christianne Muusers