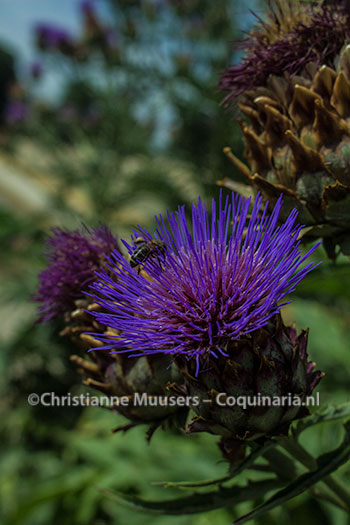 In the introduction to the recipe for Pomegranate Salad I mentioned the only day that the (catholic) French alle ate vegetarian. That is really something special, because ordering a vegetarian dish in an average French restaurant usually results in raised eyebrows and a rather plain meatless dish.

The recipe on this page and the recipe for Spinach Pie are from Le cuisinier (1656, see bibliography) by the relatively unknown cook Pierre de Lune. According to the information on the title page of his cookbook, Pierre de Lune was ‘escuyer de cuisine du feu Monsieur le Duc de Rohan’. That must have been Henri Chabot (1616-1655), who was duke of Rohan first by his marriage with Marguerite de Rohan, and later in his own right. His son and heirLouis de Rohan-Chabot was born in 1652, he was too young to appreciate the culinary arts of Pierre de Lune when he published his cookbook.

This recipe is meant for Good Friday. It is a adaptaed version of a popular dish with fowl, Jacobin Sops. On Coquinaria I have published a medieval recipe with chicken meat, but the recipe on this page could be considered a high-end vegetarian pea soup. The soup is enriched with mushrooms and artichoke bottoms. Pierre de Lune also presents a meat version and a fish version of Jacobin Sops in his cookbook, both for the Winter season. The meat version contains breast fillets of partridges or capons, grated or sliced cheese on toast, capers, lamb stock and lemon juice. For fish days De Lune uses chopped carp or eel, mushrooms and Parmesan cheese. By the way, François la Varenne also presents a – more elaborate – recipe for Jacobin Sops on meat days, but no versions for fish days or Good Friday.

The picture of flowering artichokes were taken by me in the ‘le potager du roi’ (the kitchen garden) in Versailles. More about Jacobins can be read in the recipe for medieval jacobin sops.

The recipe is from the second edition of Le [nouveau] cuisinier […] from Pierre de Lune, 1660 (see bibliography).

Chances were that the mushrooms and artichokes used in this recipe were not fresh but from preserves. Artichokes are harvested in late summer and early autumn, mushrooms (specifically Agaricus bisporus) from May to October. But maybe La Quintinie could also produce fresh artichokes for the table of Good Friday. There is also a recipe for a delicious medieval version of a Jacobin pottage for meat days, with chicken.
First course for 4 persons; preparation in advance 10 minutes + preparing Lent stock; preparation 10 minutes.

Prepare the purée. This was a ‘thin (clear) pea soup’, that was used during the many days that the consumption of meat (and meat stock) was prohibited by the church. Here is the recipe.
Chop the mushrooms and artichoke bottoms.
Drain the capers and pat them dry.

Lay one slice of bread in individual soup plates or bowls, or put them all in one large soup terrine. Pour a little heated purée over the bread, and sprinkle the chopped mushrooms and artichoke bottoms on it. Cover and keep warm (in the oven at 100 dgC/210 oF).
Melt the butter in a skillet, heat until slightly coloured. Add the capers and after a few seconds the flour. Mix until a dough-like ball forms. Then start adding the preheated purée little by little. Keep stirring. The purée has now thickened a little.
Just before serving, sprinkle the bread with grated cheese, than pour the thickened purée over it.

Finish with placing a thin slice of lemon on top, and serve at once, hot.

Recipe for Jacobin sops from the 17th century for Good Friday
In 17th-century France, Good Friday was the strictest day in catholic dietary laws: not only meat, but fish too was banned from the table. This dish for Jacobin Sops is especially for that day.
© Author Christianne Muusers