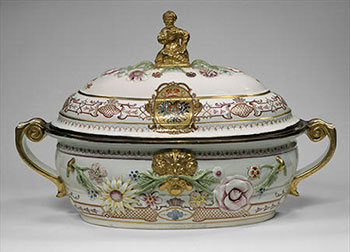 Meat stock from the nineteenth century

Soup is an important part of the Eastern-European kitchen. In the Gift for young housewives, a Russian cookery book that was first published in 1861, there is a recipe for basic bouillon that can be used for all kinds of soup. The recipes for the soups themselves contain variations of this basic bouillon recipe. For example, for the bouillon used for Sour shchi some of the beef must be replaced by salted, raw ham and more dried mushrooms are required. This same bouillon can be used for borscht and solyanka.

The soup tureen was a new addition to the table in the seventeenth century. Not just in Russia, but also in the rest of Europe. The earliest terrines were often made of silver. The tureen on the left was owned by czarina Anna Ivanovna, and it was made circa 1735 in Austria.

The recipe is presented in the English translation of Joyce Toomre of the Russian cookery book in the edition of 1897 (A Gift for young housewives), p.124. (see bibliography).

[The basic recipe for a clear, strong bouillon for all kinds of soups]
The type of beef may be varied according to the kind of soup.
The root vegetables mentioned are small, and therefore the parsley root, celery root, and leek should be chopped into 2-3 pieces. Since root vegetables add flavor, it is better to add more rather than fewer of these.
I usually put the onion and bay leaf in parentheses in the list of ingredients because not everyone likes them. They should be added as desired.
Use good regular butter or Finnish butter in shchi and other soups.
The recipes are intended to make enough soup to fill 6 deep soup dishes; of necessary, this amount will be sufficient for 8 people. […]
Above all, add bones to the bouillon and any leftover scraps from veal, turkey, or chicken intended for the main course.

The ancient Russian measures bottle, glass and pound can be found below the recipe. In the recipe I have adapted them slightly to fit into the modern metric system, and added more vegetables and less salt. When preparing the bouillon to make sour shchi, use three dried mushrooms instead of one, and replace a third of the beef with uncooked cured ham (for example Schwartzwalder Schinken or Jambon d’Ardenne)
For 2 liter stock; preparation in advance 10 minutes; preparation 4 hours, including reducing the stock. 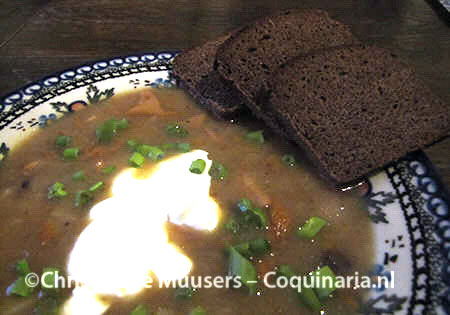 Clean and chop the vegetables.

Put everything in a large pan, bring to the boil, skim if necessary. Let the stock simmer for three hours and slowly reduce it to 2 litres. Strain through a cloth. If you want clear stock, you’ll have to clarify it.
Typically Russian: Molokhovjets mentions pressed caviar as an alternative to use for clarifying stock (next to egg whites or ground beef).

Look for extensive instructions on how to reduce, strain, clarify and store stock on the Introduction on making stock.

A recipe for Russian Stock from the 19th century
A recipe from ‘A gift for young housewives’ from Elena Molochovjets.
© Author Christianne Muusers