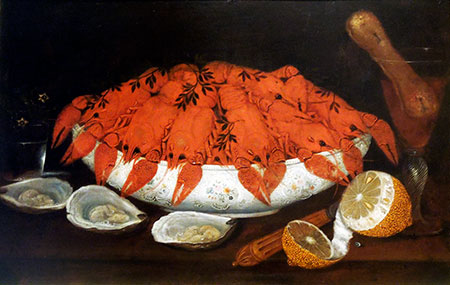 This decorative dish consists of whole, emptied eggs shells that are stuffed with raw eggs with crayfish and mushrooms and heated until the stuffing has congealed. When the eggs have been peeled and placed on a dish, they will be a very attractive side dish during dinner.

The still life with crayfish  was painted around 1760 by the Germen-Austrian painter Johann Seitz (1738-1816). Notice how ingeniously the lemon has been cut, and see the ladyfinger dipping into the glass of wine.

Who was the first? 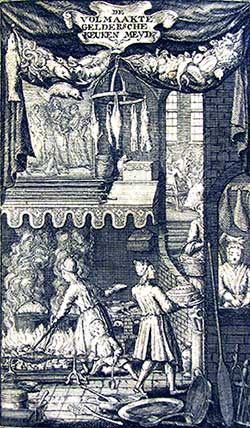 This is not the first time I remark on the copying of recipes from others. This happens all the time, and it only becomes harmful when recipes that have been copied nearly word by word are presented as original work. An example of this is Vincent La Chapelle who copied large parts of an earlier cookbook for The modern cook / Le cuisinier moderne and boasted that his recipes were all original. But one can also copy recipes in a notebook for use in one’s own household. The recipe on this page for surprise eggs first appears in cookbooks: the Geldersche keukenmeid (the Cook from Guelders) from 1756 and the Friesche keukenmeid (Frysian cook) from Catharina Zierikhoven (1772). But someone also wrote it down in a manuscript with recipes around 1780. I have not yet found a version of the recipe prior to the Geldersche keukenmeid.

The recipe for stuffed eggs can be found in the Geldersche keukenmeid in a chapter with diverse recipes, mainly concerning slaughter (curing, smoking, sausage making, “and also some custards and cheeses”). However, the Friesche keukenmeid from Catharina Zierikhoven is organized as a culinary dictionary (‘kookkundig woordenboek’), and she presents the recipe with other egg recipes under the lemma EIJEREN (Eggs).

This recipe could be considered a more delicate version of the medieval Easter eggs that are also prepared in their egg shells in the oven. The medieval recipe is mainly about the surprising colour of the eggs inside, but the surprise eggs here are all about the luxurious ingredients inside: crayfish and mushrooms.

The Frisian cook contains more egg recipes than the Cook from Guelder. Zierikhoven gives precise instructions on boiling eggs. “There are two kinds of boiled eggs”, she says, “to whit hard-boiled and soft-boiled”. According to her, soft-boiled eggs are healthier. This is how to cook soft-boiled eggs: Take medium-sized eggs and immerse these in water. Bring to the boil, and when the water boils, remove the eggs. According to me, the result depends on the heat source. On my gas-fueled stove an egg will be slimy when it is cooked on a pit turned up high. Using a smaller pit with the heat turned low, the result is much better.

Catharina Zierikhoven also gives a description on how to colour eggs in the Friesche keukenmeid. This has nothing to do with the recipe below, but since it is almost Easter, I have included it on this page:

Some of the ingredients mentioned are for culinary use. Alum or potassium alum has been used since Antiquity as a dye-fixer, to stop bleeding (shaving cream), and it is an ingredient in baking powder. Brasil-wood is wood from the Caesalpinia echinata, a tree, indigenous to Brasil that is almost extinct. It is used for bows for string instruments. During the seventeenth and eighteenth century it was a popular red dye – just as sandal wood – which turns purple when mixed with a base or alkaline ingredient. Lye is such an ingredient. It is used in households for cleaning, and sometimes as a curing agent (sodium hydroxide or potassium hydroxide). Aqua vitae is a solution of ethanol (alcohol) and water. The ink in inktjet-cassettes contains ethanol.

In short: boil the eggs in water, beer or vinegar to which alum is added to fixate the colour. It is not clear to me when the colouring agents are added: do they serve as a background colour, and are they then decorated with a pen dipped in ethanol? (here are modern alternatives for colouring boiled eggs)

The text is from the Geldersche keukenmeid from 1756 (p.410, see bibliography). There is no modern edition of this cookbook, and google.books only offers later editions (1814 is the earliest I could find in April 2018). The stuffed eggs are also present in these later editions.

The most work in preparing this dish is emptying the egg shells and chopping the ingredients for the stuffing. The recipe for the anchovy sauce is on a separate page.
First course or side dish for 6 persons; preparation in advance 30 minutes; preparation 30 minutes. 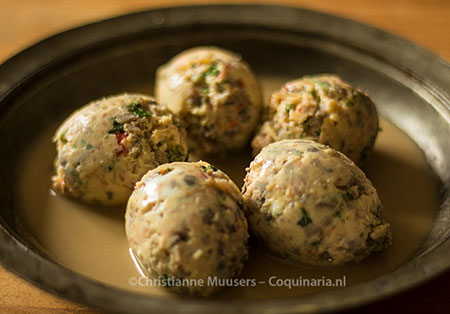 Peel the crayfish and chop the meat. Chop the parsly. Wipe the white mushrooms and chop them too.
Blanch the chopped mushrooms in some salted water and drain them well. The weight will be reduced by a third to about 140 gr.

Carefully make a hole in the blunt end of the egg, about a centimeter in diameter. For me it works best to use a thick needle that I push through the shell, and then lift small pieces of the shell until the hole is the right size. Stir the content of the eggs with the needle or a wooden toothpick to break the egg yolk, and pour  in a bowl. Keep the empty egg shells in the egg carton they were bought in with the hole underneath, to let them drain completely.

Beat the eggs with pepper, salt and nutmeg; keep two tablespoons of this mixture in a separate bowl. Stir in the chopped crayfish, parsley and mushrooms. Turn the eggs in the carton with the opening upwards, and fill them to just below the edge. Try to avoid any air bubbles.

Make a simple dough with some flour and water. Roll it out and cut out small circles, large enough to cover the holes in the eggs. brush some of the saved stirred eggs around the holes and paste the dough on it. The dough will not be eaten after baking. 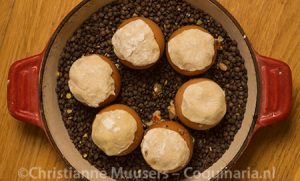 According to the original recipe, the eggs can be prepared on a spit or on a rack. For my adaptation I have chosen to use the oven instead. Fill an oven dish with a layer of uncooked lentils or rice, and place the eggs in the dish with the covered hole up.

These eggs can be served in two ways:

In the eighteenth century the eggs must rest 5 minutes after removing them from the heat. Then peel the eggs. Cover the bottom of a dish with anchovy sauce and put the eggs on it. One can use a chafing dish to serve the eggs. Serve the rest of sauce separately.

Another way is serving the eggs in the shell, just like ordinary boiled eggs. Put them with the side where the hole is undeneath, or peel the eggs partially. Serve the sauce separately, keeping it warm. The stuffed eggs are eaten just like an egg for breakfast. 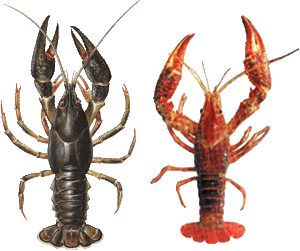 Surprise! Stuffed eggs from the eighteenth century
A recipe for very special stuffed eggs that can be found in several Dutch 18th-century cookbooks. Also: how to paint eggs in the 18th century.
© Author Christianne Muusers