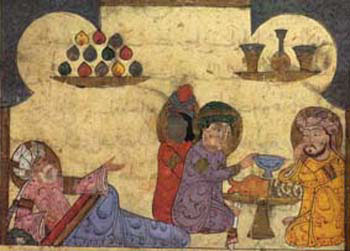 An Arab recipe from the thirteenth century

Arab pastry is delicious. Sweet and rich, but really delicious. This was already so in medieval times on, when sweet pastry was served after a meal. You can imagine that after a copious meal with a plethora of mouth-watering dishes the pastry had to be very special to be able to appeal to the already satisfied eater!

The dough for the pastry could be enriched with nuts: almonds, pistacchios, pine nuts. Fruit, either fresh or dried, was not used as stuffing. Fruit was served as a separate course before the pastry.

An Arab cookery book from Andalusia

This recipe for deep-fried dough called dafâir is taken from an Arab cookbook that was actually written ‘in Europe’, in Andalusia (Southern Spain), during the thirteenth century. The occupation by the Moors was already nearing its end, but the emirate of Granada managed to hold on until 1492, when it was conquered by catholic Castilia.

The author of the cookbook is not known. The book may have been published anonymously, but as the first pages of the manuscript are missing (and that is where the author’s name and dedication would have been) we do not know this for sure. The manuscript is now in the possession of the Bibliothèque Nationale in Paris (ms G.S.Colin arabe 7009 BNParis).

The first recipes in the manuscript as it is now are for dishes with meat. Occasionally the author mentions the origin of a recipe (like in the third recipe: “This is the recipe by Sayyid Abu al-Hassan and others in Morocco”). Then follow the other chapters: “thickened and coated dishes” (egss will be poured over the dish in the hot pan just before serving to set, or the dish will be thickened with ground almonds), a short chapter on Hippocrates, on differences in eating, customs in different countries, cooking gear, the order of the service of dishes, simple dishes, recipes from the cookbook of Ibrahim ben al-Mahdi, vegetables, fish, couscous, rice, harisa, noodles and such, several recipes for bread and pastry (savoury and sweet) and preparations with sugar, and an additional chapter on medicines. If you are interested, you can read more on medieval Arab cuisine in the introduction to the recipe for Arabian meatballs in eggplant sauce. Two more rcipes from this cookbook on Coquinaria: Arabian meatballs in eggplant sauce and Pasties with eggplant stuffing.

This recipe is taken from An anonymous Andalusian Cookbook of the 13th century in the translation of Charles Perry (see bibliography). Because this is a digital edition, there is no page-number. I present the English translation as I have found it on the internet:

Take what you will of white flour or of semolina, which is better in these things. Moisten it with hot water after sifting, and knead well, after adding some fine flour, leavening, and salt. Moisten it again and again until it has middling consistency. Then break into it, for each ratl of semolina, five eggs and a dirham of saffron, and beat all this very well, and put the dough in a dish, cover it and leave it to rise, and the way to tell when this is done is what was mentioned before [it holds an indentation]. When it has risen, clean a frying pan and fill it with fresh oil, then put it on the fire. When it starts to boil, make braids of the leavened dough like hair-braids, of a handspan or less in size. Coat them with oil and throw them in the oil and fry them until they brown. When their cooking is done, arrange them on an earthenware plate and pour over them skimmed honey spiced with pepper, cinnamon, Chinese cinnamon, and lavender. Sprinkle it with ground sugar and present it, God willing. This same way you make isfunj, except that the dough for the isfunj will be rather light. Leave out the saffron, make it into balls and fry them in that shape, God willing. And if you wish stuffed dafâir or isfunj, stuff them with a filling of almonds and sugar, as indicated for making qâhiriyât.

It takes some time to prepare these deep-fried braids, but the result is very festive.
Dessert for 4 to 6 persons; preparation in advance 20 minutes + 2 hours rising of dough; preparation 30 minutes + 15 minutes resting before frying. 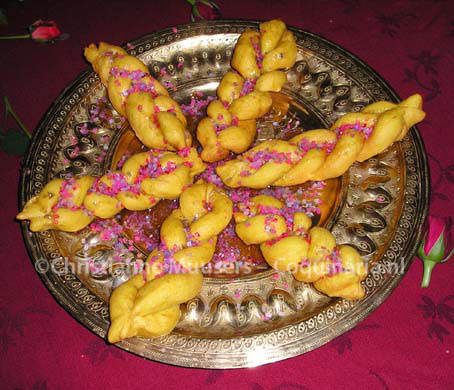 Prepare the dough – Moisten the semolina by adding the water little by little. Then add sourdough, salt, and 50 grams (5 Tbsp) flour, knead until you have an elastic dough. Stir the saffron through the egg, incorporate this in the dough. Now you add the rest of the flour, little by little, until the dough has the consistency of a soft dough for bread (like when you are making brioche). Put the dough in a bowl, covered with a moist towel, and leave it somewhere warm (I prefer the closet where the water heater is). You should let the dough rise for at least two hours, because sourdough takes longer than commercial yeast to work.
If you wish, you can add finely chopped nuts to the dough.
Prepare the sauce – While the dough rises, you can make the sauce: temper the honey with finely ground pepper, cinnamon and lavender.

Make the braids – Divide the dough in six or eight portions. Sprinkle the worktop and your hands with flour. Take one portion of the dough, and roll, pull or manipulate it until you have a long, thin string. Cut this in three strings of equal length, and plait them into a braid. Take care to pinch the ends of the strings together. Make six or eight braids in this manner. Let the braids rest for fifteen minutes before deep-frying.

Fry the braids – Heat neutral oil in a deep-frying pan to a temperature of 170 °C (or 340 °F). Fry the braids one or two at the time until they have turned golden brown. Turn them once while deep-frying. The process will take just a few minutes. Drain the fried braids on paper towels.

Heat the sauce – Heat the spiced honey slightly in a microwave to facilitate pouring.

Put the braids on a decorative plate. Drizzle some of the spiced honey over them, and sprinkle with sugar. This should be powdered sugar, but I chose coloured granulated sugar instead (see picture).

Ratl – Measure of weight, 468.75 gram (about a pound)
Dirham – Measure of weight, 3.9 gram (slightly less than a teaspoon)
Isfunj – Pastry, often deep-fried. The word comes from the Latin spongium, because of the honey (or milk, or butter, or syrup) that the pastry absorbs -like a sponge.
Qahiriyât – Pastry in the form of a ring (like doughnuts?) with finely ground almonds or pistachio’s mixed in with the flour, that is dipped in syrup or honey after deep-frying. It bears the name of calif al-Qâhir bil-lâh (died in AD 934).