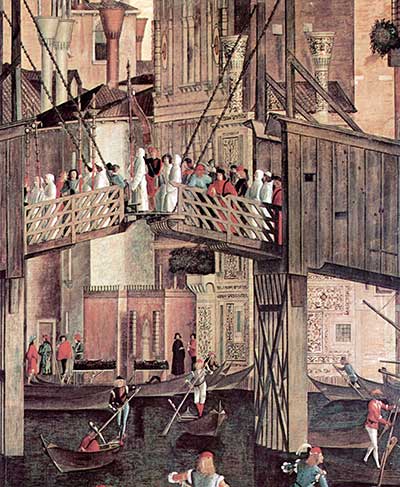 The Italian cuisine is one of my favourites. So, here is another recipe from Italy’s rich culinary past! I have made these small toasts many times, and each time my guests were pleasantly surprised by the simplicity and delicious taste of these crostini. The flavour is unexpected for modern palates: cheese, sprinkled with sugar and cinnamon, and rosewater!

In France (and the Netherlands) the sixteenth century was a relatively calm period with regards to cookbooks. Most ‘new’ cookbooks were revised editions of medieval cookbooks, or had at least borrowed heavily from them. But in Italy some really original cookbooks appeared, written by more or less well known cooks or stewards like Bartolomeo Scappi (see recipe for tortelli).

The Singolare dottrina of Domenico Romoli (1560)

The recipe on this page is taken from La singolare dottrina by Domenico Romoli (first edition 1560, see bibliography).
Not much is known about the life of Domenico Romoli. It is clear that he must have lived in the 16th century (seeing the year of publication of his book), and a contemporary of his described him as “a Florentine gentleman, well-versed in the art of cooking as well as court, with a profound knowledge of the classic and modern authors”.
He had a nickname, Panunto (oiled bread). He was proud of it, because on the title page of his book he calls himself M. Domenico Romoli sopranominato Panunto.

Contents of the Singolare dottrina

De Singolar dottrina is not purely, or even for the most part, a cookbook. It consists of twelve books, and has an appendix, “Vn breve et notabile trattato del reggimento della sanità […]” by Roberto Gropetio.

This is a brief description of the twelve books. Brief, because of my limited knowledge of (16th century) Italian.
The first book describes the tasks of a master-carver (or steward? Scalco is not mentioned in my Italian dictionary). In the second book you can find in which time of the year all kinds of cattle, game and poultry are at its best. In book three you can find the same for fish and shellfish (and snails), turtles, mushrooms and, if I am not mistaken, fish eggs and parsnips. Book four contains menus for a whole year, sbeginning with March 10 1546 (Ash Wednesday). Book five is the actual cookbook, the only part with recipes. In book six the nature of all kinds of meat and poultry is described (even camel meat!), specifically their effect on one’s health. Book seven does the same for eggs, milk and cheese, and fish. Book eight analyses the taste and properties of foodstuffs (sweet, bitter, salt, sharp, fat and bland, sour, constipating, purging [?]) and the optimal sequence of dishes in a meal. Book nine describes the properties of several herbs and vegetables that are used in salads. Book ten mentions legumes, but also aniseed and cumin. Book eleven is about tree-fruits (apples, pears, peaches and such, but also citrus fruit, almonds, chestnuts and olives), fruits we consider vegetables (melons, courgettes), and grapes. Book twelve finally describes the properties of spices, sugar, salt, vinegar, water and wine.

Two menus from the Singolare dottrina

Here are two menus from the fourth book, to give an impression of what the meals were supposed to be like. In the translation of the dishes there are many question marks. If you can, please help me out. In many menus the last dish mentioned is ‘fennel’. I wonder if these are sugar-coated fennel seeds. Romoli also gives menus for meals alla francese for each month. I won’t go into that here.

The menu for Wednesday 18 August 1546, on a meat day during Summer 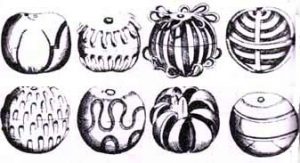 Pan unto con provatura fresca.
Quando hauerete fatte le fette del pane nel modo della rignonata, & abbruscate, mettetele à soffrigere con butiro, riuolgetele una uolta distendete le fette nella padella, & metteteui per ciascuna una fetta sottile di prouatura fresca, mettasi di sopra il coperchio caldo, & come la prouatura sarà risolata, spruzziuisi un poco di acqua rosa, & mettauisi di sopra il zuccaro & cannella: cauate poi, mandatele in tauola, & sopra tutto operate che si mangino calde.
Fried bread with fresh buffalo cheese.
When you have prepared slices of bread in the manner of  ‘rignonata’ (a preceeding recipe) and you have toasted them, you bake them in butter. Turn once, lay them in a frying pan, and cover each slice with a thin slice of fresh provatura cheese. Cover with a heated lid, and, as soon as the cheese has melted, sprinkle [the toasts] with some rose water. Then sprinkle with sugar and cinnamon. Wait a short while, then bring them to the table, and mind that they are eaten hot.
Fragment from the recipe for Rognone di Vitelle with instructions for preparing pan dorato:
Pigliate un pan grosso duro, scorticatelo, tagliatelo in fette non troppo grosse, mettetele à seccare al fuoco […]
Take a large coarse bread, decrust it, and
cut it in slices that are not too thick, let it dry by the fire […]

According to the recipe the bread must be decrusted. You may do so, but you don’t have to.
The bread is first toasted, then fried in butter, and finally grilled. In the original recipe the cheese is melted by putting a hot cover on the frying pan, but I prefer to profit from the modern appliances we have.
Antipasto for 6 to 9 persons; preparation in advance 15 minutes; preparation 10 minutes. 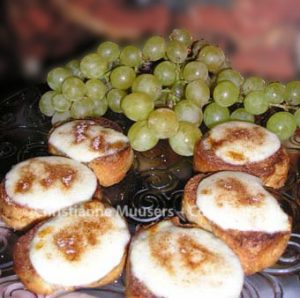 Toast the slices of french bread or larger slices. Then fry them shortly in butter over a slow fire. The bread must be golden, not brown.
Cut the cheese in 18 slices.

Heat the (oven with built-in) grill.
Cover each piece of bread with a slice of Mozzarella. Place the crostini under the grill until the cheese has melted and is starting to colour. Take from the grill, sprinkle sugar with cinnamon over it, and rose water.

As soon as possible.

A fresh cheese made from the milk of buffalos. Another buffalo cheese is Provatura. The difference between Mozarella and Provatura is mainly the place of origin: Provatura cheese is made in the vicinity of Rome, Mozarella is produced near Naples.
Originally these cheeses were made from buffalo milk, but nowadays they are mostly made from cow’s milk. There simply aren’t enough buffalos to provide all the milk needed for the production of these cheeses! Just use ordinary Mozarella or Provatura if you can’t get cheese from buffalo milk.

My knowledge of sixteenth century Italian bread isn’t sufficient to decide what exactly is meant here. It could be bread made of durum wheat, or literally ‘hard’ (stale or heavy?) bread which is either thick/large, or coarse in structure. Maybe the big, flat Tuscan bread that is used for making bruscchetta is meant (with thanks to Silvia Coenen for her suggestions).

A recipe for crostini from the sixteenth century
© Author Christianne Muusers