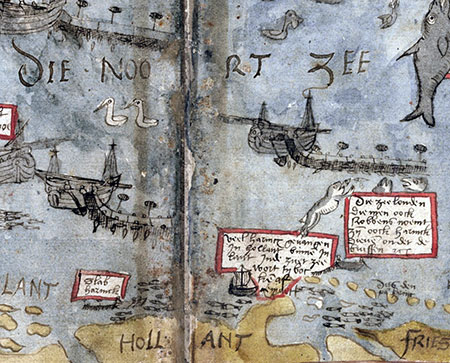 Herring, often in preserved form, is very important food for medieval people. During the fifteenth century, when the recipe on this page was written, one could buy very salty pickle herring, dried herring en smoked herring. The English have, just like the Dutch, several kinds of smoked herring, like kipper, bloater and buckling. In the Netherlands most herring is sold as Hollandse nieuwe (Dutch brined herring) or pickled in vinegar.

The picture of the North Sea with herring shoals (detail) is from the Visboek (Fish book) that was hand-written and illustrated by Adriaen Coenen, a sixteenth-century fish trader from Scheveningen near The Hague. The beautiful manuscript is kept in the Royal Library in The Hague but it is not neccessary to travel: the RL has made the entire manuscript availablie online, in high resolution. The frog-like creatures on the right are seals, according to Coenen these are herring thieves, circling a herring buss. 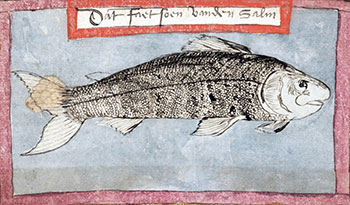 Salm was also caught in Dutch waters, but some years this fish was hard to come by, while other years there was an abundancy of them.Coenen mentions a salmon that weighed at least fifty pounds. On the culinary quality of salmon Coenen has little to say. He refers to a Swedish author (Olaus Magnus) if you want to know more.

A dish for Lent

This dish is from the late-fifteenth-century cookery book Wel ende edelike spijse (Good and noble food). The very special Apple sauce for Lent is also from this manuscript. During the forty days of Lent (from Ash Wednesday until Easter) meat was banned from the table, but fish was allowed. So remember, that the medieval Lenten diet is NOT vegetarian. Read more about food during Lent in the recipe for Fake fish. For fasting during Lent the medieval way, avoid meat and dairy products (including eggs). But the modern way would also exclude fish, alcohol and sugar.

The recipe below is from the oldest Dutch cookery book still in existence: Wel ende edelike spijse (Good and noble food). Here is the complete book online, with a translation in English and a glossary.

Waermoes is a collective noun for vegetables, especially leafy ones. However, in this recipe it is clearly leeks that are meant to be used. I used smoked herring instead of dried herring. It is still available in specialized pet shops as dog food, but it smells very, very fishy. I have used a bloater instead (cold-smoked herring). Even steamed mackerel is an alternative.
Main dish for four persons; preparation in advance 30 minutes; preparation 30 minutes + cooling down. 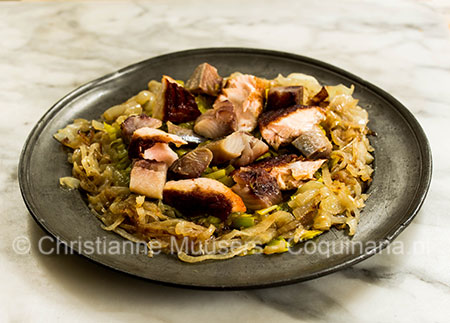 Rince the chopped white of the leeks and drain well. Chop the onion. Make bread crumbs (here is described how to do that). Fry the salmon in a tablespoon oil, remove the skin, and cut into large chunks.
Clean the smoked herring (these are smoked with their entrails) and pull the skin off the fillets. Cut the fish into strips. Mackerel is treated the same way.

Fry the onion in oil on a slow fire for ten to fifteen minutes, until lightly coloured. Add the leeks and stir until soft. Pour in the wine, and simmer for about five minutes. Thicken the remaining liquid with the breadcrumbs. When the vegetables have lost some of their heat, chop everything fine, or put in the blender. Return the vegetables to the pan, with peper, salt, and saffron crushed in some hot water. Stir in the fish and keep simmering without cover until most of the liquid has evaporated. Let cool to room temperature.

When preparing the dish in advance, keep it in the refrigerator until use, but let it return to room temperature before serving.

Serve the leeks and fish on a decorative plate, or small bowls. It can be eaten with a spoon or with pieces of bread. The dish can be accompanied by cooked green peas or lentils, or rice.

Herring contains a high percentage of fat, and when smoked, the taste reminds one of smoked bacon. That is why the Dutch call cold-smoked herring  spekbokking (spek means bacon). The silver-coloured fish has turned golden during the smoking process. Bloater used to be a popular dish, but nowadays Dutch people almost exclusively eat maatjesharing (Dutch brined herring).

Recipe for a medieval dish with fish for Lent
This fifteenth-century recipe is from the oldest Dutch cookbook.
© Author Christianne Muusers