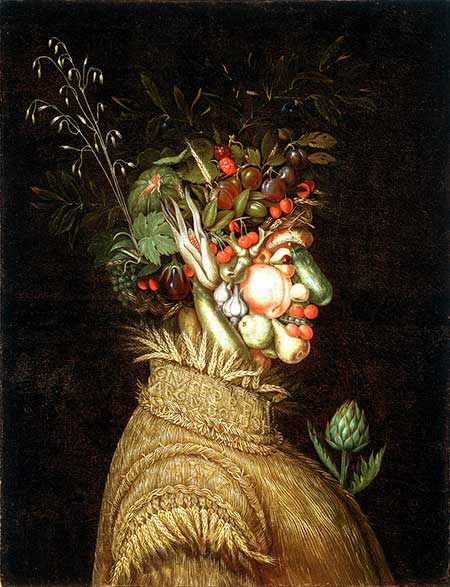 One year ago I published a Dutch recipe for stuffed aubergines from the 1970s. This historical recipe is also for stuffed aubergines, but older; it was published 450 years ago. The cardinals were the intended public that Bartolomeo Scappi, author of the cookbook that the recipe originates from, cooked for. More on Scappi and his career can be found in the introduction to another recipe from Scappi: The favourite tart of the pope and his recipe for Tortelli in brodo. Other recipes from Scappi’s Opera dell’arte del cucinare: Broccoli in the Opera, Fresh pasta dough for tagliatelle, lasagne and ravioli, Soup of broad beans with saffron and herbs, Scappi’s Macaroni.

Aubergines (eggplants in American-English) are beautiful, with their smooth dark-purple skin. Like many other vegetables and fruit, they originate from the Indian subcontinent. Arab cookery books already contain recipes for aubergine in the tenth century, and on Coquinaria is a recipe from the thirteenth century. Later the fruit-vegetable is introduced into Southern Europe. Medieval aubergines and some modern varieties still have a bitter taste, which is why they should be boiled in salted water before preparation. They also contain seeds, but many aubergines that can be store-bought are sterile: no seeds. 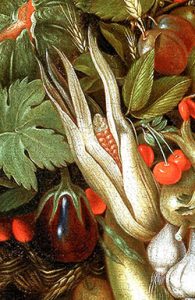 On the right is a detail of the aubergine in the painting by Arcimboldo, the ‘ear’. The short rotund form is excellent for stuffing.

On my blog Kookboekrecensies (reviews of modern and editions of historical cookbooks) I have compared several editions of this important sixteenth-century cookery book. Here I will present the short gist of it: the facsimile edition with an introduction by Giancarlo Roversi (1981, reprint 2002) is complete with all the menus in Book IV which represent a large part of the Opera. However, to appreciate the introduction, one must be able to understand Italian. The English translation by Terence Scully is my favourite edition, with an extensive introduction on life and works of Bartolomeo Scappi and notes to the recipes. The menus in Book IV are very much abbreviated and not translated. There is also a recent Dutch translation without any notes and a rather meagre introduction, and an edition of a sixteenth-century Dutch adaptation of the Opera which I will not describe here. Use google translate to read the complete article on my blog.

The text is copied from the 1570 edition (see bibliography), recipe III.230. For the English translation I have used Scully’s version, with small changes.

To cook stuffed aubergine in Lent

Get aubergines, peel them, and dig out the inside through their small end. This will be easier to do when they are pre-boiled in hot water. Take [the inside of the aubergines] and beat it with knives along with aromatic herbs, dry walnuts and almonds, both ground, some grated bread, pepper, cloves, cinnamon, and a small clove of garlic, crushed, while adding some oil and verjuice. Stuff the aubergines with that mixture and set them on end, their opening upwards, in a pot of a suitable size. In that pot there should be oil water, salt, saffron and some of the above spices, enough to reach halfway up the aubergines. Seal up the pot and boil it gently. When they are almost done, add some bread crumbs and chopped fine herbs to the broth, ensuring that the broth is spicy and slightly tart.  When they are done, serve them with that broth over them.

If you want to cook them in an oven, though, there is no need to peel them; only stuff them either with that mixture or else with oil, verjuice, salt, pepper and a small clove of garlic, and bake them. When they are done, peel them very carefully without breaking them. Alternatively, cut them through the middle and lift out the best part with your knife and serve that hot, dressed with orange juice and pepper. If it is not a fasting day, you can put grated cheese and eggs into the stuffing.

Scappi peels the aubergines after baking them, but I do not. They remain firmer, and I love the dark skin. If this dish is prepared according to the instructions for Lent, it can be served as a vegan dish. For my adaptation I used the version with cheese and egg.

By the way, in his translation Scully skips over an unclear phrase in the second part of the recipe. According to Scappi, the aubergines can be baked in the oven stuffed with the described stuffing, or “with oil, verjuice, salt, pepper and a garlic clove”. But that is not a stuffing, at the most it is the flavouring of a stuffing. Since the aubergines are peeled after baking, it makes no sense to add the mixture then. So, I guess that here also the scooped-out aubergine meat is added to the oil and verjuice and used as stuffing.

First course or side dish for 4 persons or vegetarian main course for 2 persons; preparation in advance 15 minutes; preparation 45 minutes. 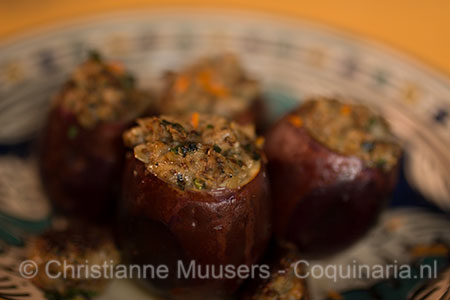 Wash the aubergines and remove the top with the calyx and stem. If only oblong aubergines are available, halve them lengthwise. Scoop out the inside of the aubergines, taking care not to pierce the skin. Boil for two minutes in salted water, then drain on kitchen towels with the hollowed out side underneath.

Chop the scooped out aubergine meat very fine, and fry in some olive oil. Add the chopped herbs, nuts and spices. Add the crushed garlic, more olive oil, verjuice, egg and grated cheese. Mix well, then add breadcrumbs, as many as needed to thicken the stuffing. Put this in the aubergines. Any leftover stuffing can be formed into balls and baked alongside the aubergines.

Serve these stuffed aubergines as a first course, or with bread or pasta as a vegetarian main course. Pour some of the juice (bitter orange or orange/lemon) over the aubergines just before serving them, the remainder is served in a sauciere.

Variation – Use the stuffing to make ravioli with fresh pasta dough. Scappi serves ravioli with Parmesan cheese, a little sugar and a pinch of cinnamon.

The bitter orange, Seville orange or Bigarade orange(Citrus aurantium) is not directly related to  sweet oranges but a separate variety that belongs to the same family as Rue, the Rutaceae. Bitter oranges were introduced into Europe before sweet oranges; they were cultivated on Sicily as early as the eleventh century. Sweet oranges did not arrive in Europe until the end of the fifteenth century, four centuries later.

A recipe for stuffed aubergines from Scappi
These aubergines with a stuffing full of flavours is from sixteenth-century Italy, but it still tastes great today!
© Author Christianne Muusers