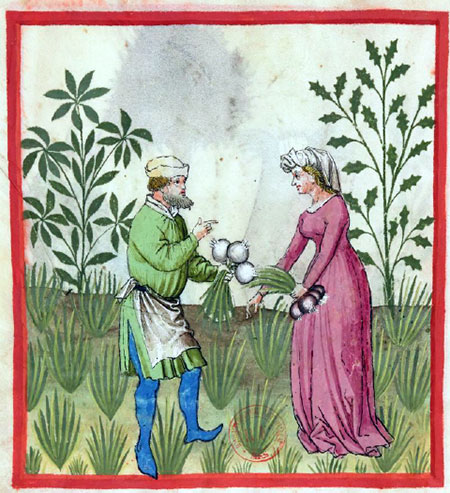 The recipe for this nourishing dish has survived in several medieval English manuscripts. Although it is not stated explicitly, the dish is typically meant for Lent. It contains olive oil and almond milk, and lacks any meat or dairy products. The main ingredient are onions. In the picture a man and woman are harvesting white and yellow onions (miniature from the Tacuinum sanitatis).

The name of this dish is ‘soup dorée’, which literally means ‘gilded soup’. There were two versions of this dish, one with onions, the other with saffron, saffron and spices. Hieatt and Butler (see bibliography) mention the toasted bread to explain the name of this dish. But I tend to disagree. This ‘golden’ toast is hidden from sight by the onions, and toasted bread is used in a lot more recipes without the qualification ‘golden’ or ‘gilded’ in the recipe title. The sweet version of soup dorée contains saffron, turning the dish a golden colour. Moreover, in ms Harleian 279 the fried onions themselves are called ‘the dorry’, the gold. And indeed, fried onions turn a golden colour. So the gold of the soup, whether with onions or saffron, comes from these ingredients and not from toast. A bit unrelated, but ‘golden’: The nobels below are gold coins from 1354/1355, minted under the reign of the English king Edward III in London.

Several adaptations of this recipe on internet have opted for an onion soup. But a medieval soup (or soppe) is not necessarily a soup in the modern sense. Soup or soppe referred originally to the piece of bread on which the main ingredient was placed, over which more or less liquid was poured. The bread soaks up the moisture and disintegrates. This used to be a common way to thicken a sauce or stew before the roux. It has been my choice to present this dish as a stew rather than a soup. But it was still eaten with a spoon!

Compared to some other European countries, the English have an astonishing amount of fourteenth- and fifteenth-century cookery books. However, the total number of recipes in these books is less than one would expect: the recipes were copied more than once. This recipe for onion stew for example, can be found in the fourteenth-century manuscript Diuersa servicia (ms Douce 257) plus four related texts (sowpys dorry), and in fifteenth-century manuscripts Harleian 279 (soupes dorroy) and Laud 553 (soupes dorrees). The sweet version can already be found in the fourteenth-century The forme of cury, preserved in manuscript BL Add.5016 (sowpes dorry) and five related copies, and a century later in Harleian 279 (soupes dorye). Both recipes do not appear in the even older Anglo-Norman cookbooks. Most of the mentioned cookery texts have been published in two editions, see the bibliography at the bottom of this page.

Below are three versions of the Soup dorée with onions, to demonstrate the close relations between the English cookery books from the fourteenth and fifteenth centuries. The letter þ is the thorn, an obsolete letter for ‘th’. On a Windows-keyboard it can be found under Ctrl-Alt-t, on Apple under Cmd-Opt-t. By the way, it is interesting to see how the Middle-English verb ‘nym’ is used instead of take. This resembles Dutch ‘neem’ and German ‘nimm’.

Golden sups – Take onions and mince them. Fry them in olive oil. Then take wine and heat this with the onions. Toast white bread and put it in dishes. Pour (good) almond milk over it, and the onions with the wine. Serve it.

The onion stew can be served as a main dish in a vegetarian or vegan diet, because of the almonds. But because just almond milk is being used, it could be advisable to add some extra toasted almonds or almond slivers. The almond milk should be home made rather than shop-bought. Some online versions add sugar or honey, maybe because they are confused with the other version of Soup dorrée, The stewed onions are sweet in themselves, so apart from the fact that sugar or honey is not mentioned in the recipe, it is also unnecessary. If you prefer making a soup instead of stew, just use more almond milk and wine.
Side dish for 4 persons; preparation in advance 30 minutes; preparation 30 minutes. 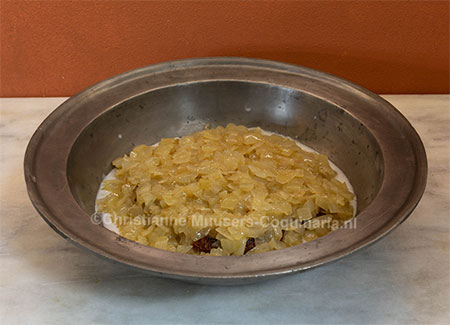 Heat the oil in a pan with a thick bottom, and fry the onions, covered with a lid, for about fifteen minutes or a little longer. Keep the heat moderate and take care that the onions do not burn. Add the wine when the onions are a nice golden-brown, stir well and simmer uncovered until the liquid is reduced by half. Add salt and pepper to taste. 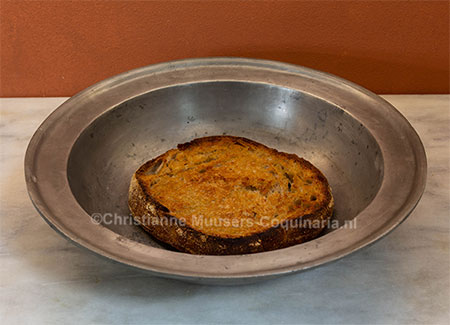 Baste the bread with olive oil and toast it in a bread toaster or in the oven. It is up to you whether you leave the crust on or not. Heat the almond milk. If desired, toast some almonds or almond slivers in a dry pan. 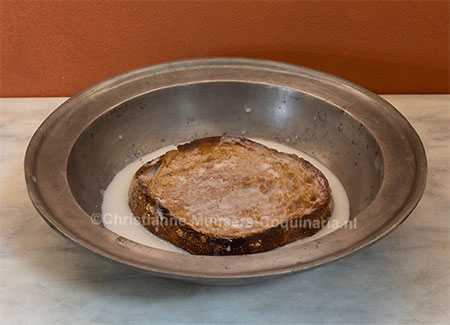 Take a large dish, or four soup plates. Put the bread in the dish and pour the hot almond milk over it. Let the bread soak up the milk, then scoop the onions over the bread. Finish with toasted almonds if used.

Serve at once. The stew in the picture is served in a large pewter dish. 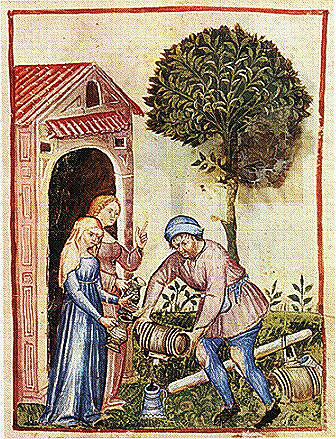 In the early twentieth century, olive oil was considered exotic in North-West Europe. It was associated with the South, and travelling people thought it was the cause of any digestive inconvenience they experienced during travels. However, during Lent olive oil was already imported and used in the Middle Ages.

The editions below were used by me. Links refer to available editions. All books mentioned on Coquinaria